New York Campaign Gets Rowdy Ahead of Vote 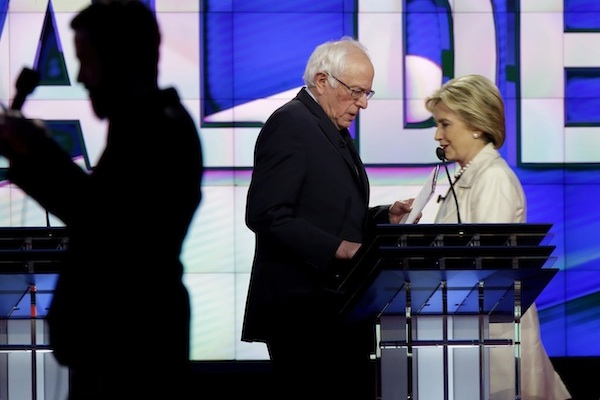 NEW YORK (AP) — Democrats brawled in Brooklyn while Republicans in black tie threw sharp elbows at a Manhattan gala as New York politics got rowdy ahead of the state's Tuesday presidential primary.

As protests raged outside a state GOP dinner, Republican front-runner Donald Trump delivered an impassioned defense of the city he calls home.

The Democratic debate came at a pivotal moment in the party's primary campaign, with Clinton leading in the delegate count but Sanders generating huge enthusiasm for his surprising candidacy. The debate also left no doubt that a rivalry that once centered on wonkish policy disagreements has turned strikingly personal.

The Vermont senator took a biting and often sarcastic tone as he sought to chip away at Clinton's credibility on issue after issue. He went so far as to suggest that her labeling of certain criminals as "superpredators" when she was first lady was "a racist term and everybody knew it was a racist term."

The tone among Republicans was somewhat more subdued. Trump praised the city's response to the nation's deadliest terrorist attacks in remarks designed to jab rival Ted Cruz, a Texas senator who has repeatedly condemned "New York values" in his push to defeat the New York real estate mogul.

"In our darkest moments, as a city we showed the world the very, very best in terms of bravery, heart and soul of America," Trump charged. "These are the values we need to make America great again."

On the sidewalks outside, Trump was the target of rowdy protesters who hung an effigy of the billionaire businessman and chanted, "How do you spell racist? T-R-U-M-P."

Campaigning Friday morning in East Harlem, Clinton visited Corsi Senior Center, playing game of dominos, speaking to about 75 people and touring a public housing apartment in the building. "Today, too many new Yorkers are struggling to pay rising rents. They're being priced out of communities where they've been for years. ... And Latino and black families are being hit the hardest. "

Sanders arrived Friday in Rome for a Vatican City conference on social and economic justice, which he said was too meaningful to pass up. At the conference, he issued a global call to action to address "immoral and unsustainable" wealth inequality and poverty.

For Clinton, a win in New York, a state that twice elected her senator would blunt Sanders' recent momentum and put his pursuit of the nomination further behind. A Sanders upset in New York would shake up the race, raising fresh concerns about her candidacy and breathing new life into the Vermont senator's campaign.

The Democratic primary has been fought for months on familiar terrain. Clinton has cast Sanders' proposals for breaking up banks and offering free tuition at public colleges and universities as unrealistic. Sanders has accused Clinton of being part of a rigged economic and political system, hammering her repeatedly for giving paid speeches to Wall Street banks and refusing to release the transcripts.

Clinton continued to struggle to explain why she has not released the transcripts, saying only that she'll do so when other candidates are required to do the same. She tried to raise questions about Sanders' own openness by noting that he has yet to release his income tax information.

The senator pledged to release his most recent tax returns on Friday, and said there would be "no big money from speeches, no major investments" in the disclosures.