Lawyer: Smith Held No Gun as he Was Shot in the Back 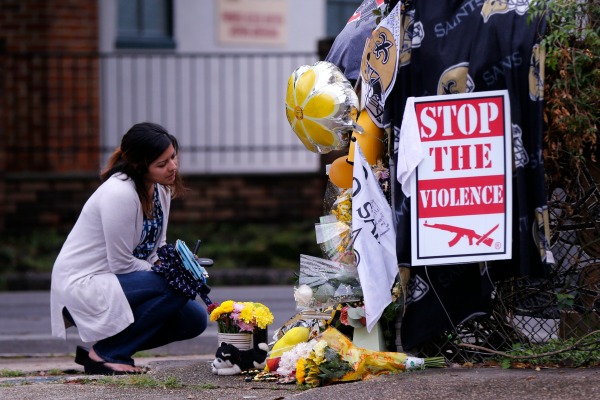 NEW ORLEANS (AP) — Former Saints defensive end Will Smith was shot multiple times in the back after his killer deliberately rammed his Hummer into the NFL veteran's Mercedes SUV, but Smith never pulled out his own handgun as he tried to protect his wife, the Smith family's lawyer said Wednesday.

Throughout the confrontation, Smith's licensed 9 mm handgun remained loaded but unused in a compartment inside his car, attorney Peter Thomson said.

A lawyer for Hummer driver Cardell Hayes, who is jailed on $1 million bond after being arrested by police on a murder charge, said his client felt threatened Saturday night and was not the aggressor. But Thomson called this a lie and a distortion, and said the real victims were Smith and his wife Racquel, who ended up hospitalized with bullet wounds in both legs.

"Suddenly this Hummer drove up at great speed behind them and rammed into them violently, causing their back windshield to shatter, their heads to whip back, and their car to hit the Chevy Impala in front of them," said Thomson, who described the ramming of the car as aggravated battery.

Hayes and his passenger then got out and angrily approached Smith, who asked why they were attacking him, Thomson said.

"The driver, who I understand is the killer in this case, is enraged," Thomson said.

Smith's wife and another female passenger in their car got out to defuse the situation, and walked Smith back to his car, "but the killer follows," he said.

"Suddenly, two shots are fired. She is shot immediately in both legs and she collapses. Either immediately or moments thereafter, the killer unloads six to eight shots into Will's back," Thomson said.

"I can tell you the killer showed no remorse whatsoever, and actually stood over Will Smith's dead body as his wife crawled away," he added.

Thomson said Hayes shot Smith eight times in the back. The coroner's report, released Wednesday, clarified that seven of the bullets hit his back and one in the left side of his chest.

Police confirmed that a 9 mm handgun, loaded but unfired, was found inside Smith's SUV. Police also said that Hayes acknowledged at the scene that he fired his 45-caliber handgun at Smith and his wife; and that police also found a second loaded but unfired gun — a revolver — inside Hayes' Hummer.

"During the argument, Hayes produced a 45-caliber handgun and opened fire, striking Smith and his wife. No one else was injured in the gunfire," a police statement said. "An additional charge for Smith's wife's injury is pending further investigation."

Thomson read a brief statement from Racquel Smith, who remains hospitalized, he said, after one bullet fractured her right femur near the knee and another passed through her left thigh, into her left knee.

"She considered him her Superman, and that night, as he always does, (he) was protecting her," Thomson said.

There's no dispute at this point that the deadly confrontation was precipitated by an earlier encounter, which Hayes' lawyer described as a "hit and run." Thomson rebutted that, saying the Hummer had stopped suddenly, causing Smith to brake quickly, but that any contact between them was nothing more than a slight bump.

"The consensus in the car was, 'we didn't hit this vehicle, there's no damage, it's late at night,' so out of concern for their safety and because they don't know why this Hummer had stopped so suddenly, and seeing no damage whatsoever, they continued," Thomson said.

"There is nothing, nothing, Will Smith could have ever said" to justify the shooting, Thomson concluded.

The case has riveted a city where Smith was a fan favorite.

Attorney John Fuller has insisted that Hayes, 28, will be vindicated once the full story emerges. He said Hayes had responsibly called 911 and was following the vehicle that hit him to read the license plate number moments before the fatal confrontation.

A public visitation will be held Friday to honor Smith and a private funeral and burial will be held Saturday.

Smith came to New Orleans from Ohio State and quickly became a team leader. After retirement, he chose to stay in his adopted community, showing his commitment to the city as it recovered from Hurricane Katrina and supporting a foundation that helped women and children.

This story has been corrected to show the lawyer's name is Peter Thomson, not Robert Thompson.