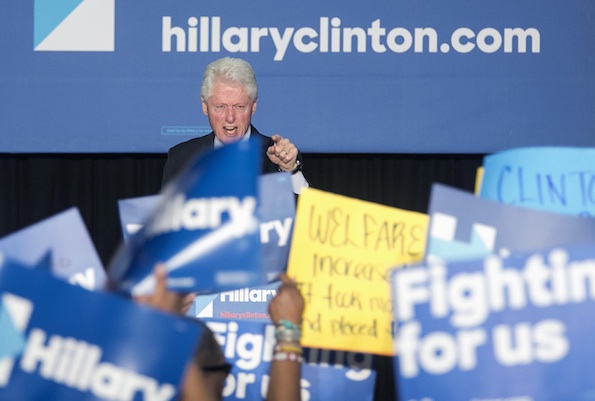 WASHINGTON (AP) — A day after a heated exchange with protesters, Former President Bill Clinton is offering a near-apology for his behavior at a campaign event for his wife, Hillary Clinton.

Bill Clinton told supporters in Erie, Pennsylvania on Friday that he likes protests but it "bothers" him when the activists drown him out.

"So I did something yesterday in Philadelphia. I almost wanted to apologize for it, but I want to use it as an example of the danger threatening our country," he said.

Bill Clinton said Americans need to be able to have conversations, even when they are angry — a standard he failed to meet on Thursday afternoon with the protesters.

The handful of protesters at the Hillary Clinton presidential rally were objecting to welfare reform and gun violence laws passed when he was in office 20 years ago.

As first lady, Hillary Clinton used the term "super-predators" to describe young people in gangs in a 1996 speech about the crime bill — one of her husband's signature policy achievements. Some blacks have found the term offensive and Hillary Clinton has said she regrets using the term.

Bill Clinton has also said he regrets signing the 1994 legislation because it contributed to high incarceration rates of black people for nonviolent crimes, like minor drug offenses.