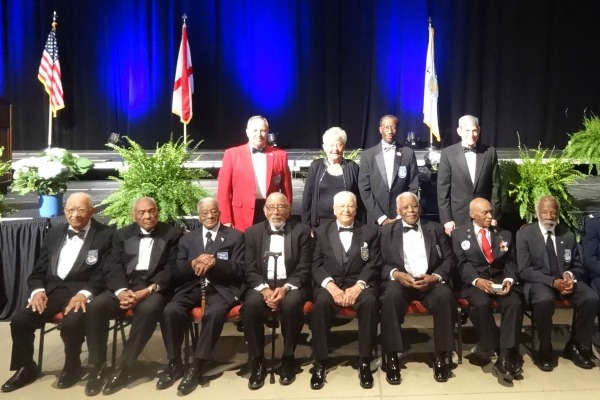 The Tuskegee Airmen are celebrated for good reason. They helped accomplish the cherished “Double V” -  a victory over Adolf Hitler’s Nazi regime in Europe, and overcoming “Jim Crow” discrimination practices that had kept them from opportunity and achievement. Black men, initially denied the opportunity to serve as combat pilots in the U.S. military, persisted and achieved their place in history. Their celebrity and honored place in American history is deserved.

Recently, the 75th Anniversary of the Tuskegee Airmen was held at Moton Field in Tuskegee, Ala. A press conference featured Tuskegee Airmen on the very grounds they had trained 75 years ago, March 22, 1941 when the Tuskegee Experiment was launched. That outdoor ceremony commanded the attention of local and national dignitaries. John Ward, mayor of the city of Tuskegee, was on hand to congratulate several persons, including the National Park Service personnel, for convening such a robust salute to the Tuskegee Airmen.

After a brief invocation and introduction at the outdoor gathering of 200, an unusual event underscored the historic press conference. Overhead, it was announced, we would soon see the flyover of four aircraft as a special salute to all the armed forces and specifically honoring the Tuskegee Airmen. The protocol for these ceremonial fly-overs is always four or more aircraft. For this occasion the U.S. Air Force permitted the formation representing the aircraft that the Tuskegee Airmen flew and serviced from the Army Air Corps’ 99th Pursuit Squadron, the 100th, 102nd and the 332nd Fighter Squadrons.

The outdoor ceremony moved into the hangar that is the main museum at Moton Field, the original Tuskegee Airmen training facility, now designated an historic site.  Once inside the museum theater, the Tuskegee Airmen were invited to answer questions from guests, particularly from local high school students. This Q and A lasted nearly two hours, as the stellar emcee made sure that every airmen had a chance to respond to questions. As one might imagine the rich and intriguing questions were matched only by the colorful, candid and authentic answers from the airmen from combat, to personal memorable moments, to the accuracy of the George Lucas film “Red Tails.”

In the evening of that historic date, March 22, guests and dignitaries gathered at the Montgomery Marriott for the 75th anniversary gala. Excerpts from the Broadway play “Black Angels Over Tuskegee” were performed to the delight and surprise of the 400- member audience. Air Force Chief of Staff, Gen. Mark Welsh, II,I was awarded an honorary membership to the Tuskegee Airmen and given his “Red Tails” sport coat.

The finale was the appeal to champions for the Tuskegee Airmen Foundation. Led onto the field of philanthropy by the very capable, Brig. Gen (Ret.) Leon Johnson, Foundation CEO, the Tuskegee Airmen Youth Aviation and STEM Academy was introduced as the foundation’s highest priority. Tasked with a $7.5 million fund-raising goal each year for the next 10 years, the foundation is determined to reach a long-term goal of $75 million to sustain the TAYASA in perpetuity.

The Pacific Northwest was represented by Michael “Chappie” Grice of Urban Wings and Aerospace Leadership Club in Portland, Ore. and Tayargi Peterson of Pacific West Aerospace, Inc. in Seattle.  These two organizations, with the help of Wells Fargo Bank, The Museum of Flight, Boeing, the U.S. Navy, and Alaska Airlines, are identifying young pilot candidates, offering classes, and hope to collaborate on curriculum prototypes for the Tuskegee Airmen Youth Aerospace and STEM Academy and preserve the legacy of the Tuskegee Airmen. In Portland, the Urban Wings and Aerospace Leadership Club (www.urbanwings.club) delivers training to high school students in aviation, banking and leadership.  The entire program is built around helping young people achieve and emulate the “character, courage and commitment to excellence” that define the collective persona of the Tuskegee Airmen.

In coming weeks the Tuskegee Airmen Foundation with the National Park Service will host the summer program, “Legacy Flight Academy,” at historic Moton Field.  In July, Tuskegee Airmen, Inc. will hold its annual convention. More information can be obtained at www.tuskegeeairmen.org. For now, let us be thankful for the men that are living history as they honor their fellow soldiers that gave so much to our country.

Many thanks to the gala team headed by Vanessa Blacknall–Jamison and the hospitality of staff Maggie Thomas at Tuskegee Airmen, Inc. May we always remember and always revere these Tuskegee Airmen.