Trump struggles to get Message Right ahead of Wisconsin vote 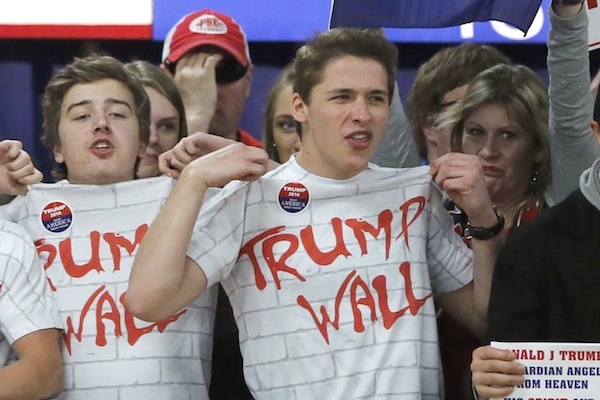 MILWAUKEE (AP) — Donald Trump worked to right his campaign on Sunday after a shaky week, brushing off verbal missteps about abortion, nuclear weapons and GOP rival Ted Cruz as he cast forward to Tuesday's Republican presidential primary in Wisconsin.

Trump, acknowledging the possibility of a loss to Cruz in Wisconsin, said it would be better to win the state but was confident he would capture the nomination regardless. He acknowledged that the past few days had marked a difficult patch for his campaign.

"I think I get there anyway" — meaning the nomination — Trump told "Fox News Sunday.

The Republican race is overshadowed by a persistent effort by Trump's rivals in the campaign and the party to force the nomination fight into the July convention.

Amid talk of the Republican establishment trying to block the front-runner, GOP Chairman Reince Priebus said the nomination process will be clear, open and transparent. Cameras will be there "at every step of the way" at the convention, he said on ABC's "This Week."

If the race isn't settled after all the primary contests, then "we're going to have a multi-ballot convention," with more and more delegates free to pick a candidate of their choice in each round.

But Priebus was clear: "Nothing can get stolen from anyone."

Wisconsin has emerged as a proving ground for anti-Trump forces as the front-runner's campaign hit a rough patch.

Nobody can take more delegates to convention than Trump

Cruz has little chance to overtake Trump in the delegate hunt before the convention. Ohio Gov. Kasich has none. Both hope to deny Trump a delegate majority in what's left of the primary season, forcing the nomination to be settled at a contested convention at which one of them might emerge.

Kasich expressed confidence that Republicans would have an "open convention," but suggested it wouldn't involve the type of unseemly chaos that party leaders fear will play out on national television, dampening their prospects for winning the presidency and possibly House and Senate races, too.

Kasich told ABC that a contested convention will be "so much fun."

On the Democratic side, the race between Hillary Clinton and Bernie Sanders has grown increasingly bitter, too, though it has not matched the GOP contest for raw hostility. Their attention will quickly turn to an even more consequential contest, in New York on April 19, where Clinton hopes to avoid an upset in the state she served as senator.

Clinton told NBC's "Meet the Press" that she was confident the two campaigns could settle on a debate date before that primary.

In recent days, Clinton has taken issue with Sanders' suggestions that her campaign is being aided by fossil-fuel interests, and in the broadcast interview, she accused Sanders' aides of doing insufficient research about her record of standing up to oil and gas companies.

"We were not lying," Sanders told CNN's "State of the Union." ''We were telling the truth."