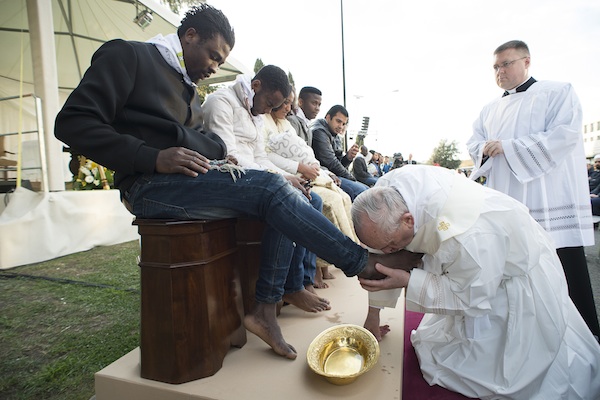 Christians in the Holy Land and across the world are celebrating Easter, commemorating the day followers believe Jesus Christ was resurrected in Jerusalem 2,000 years ago.

Across the Christian world people are attending services and taking part in traditions that vary from egg hunts and visits from the Easter Bunny to emotion-laden processions and re-enactments of the crucifixion.

In Vatican City Pope Francis is celebrating Easter Sunday Mass in St. Peter's Square, where tens of thousands of faithful are patiently enduring tight security to be near him. 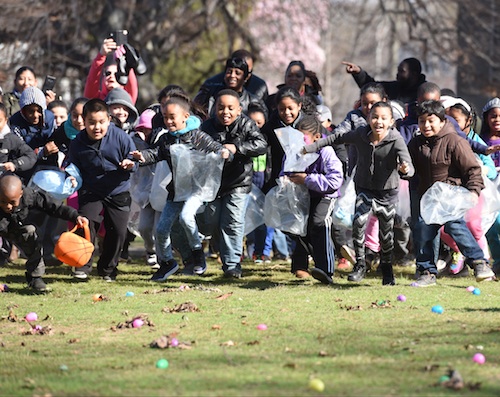 Photo: Boys and girls in the 7-9 year-old group charge for eggs at the Paterson Easter Egg Hunt at Westside Park in Paterson, N.J. Saturday, March 26, 2016. (Chris Pedota/The Record of Bergen County via AP)

Pope Francis presided over a solemn vigil service Saturday night. In his homily, Francis said darkness and fear must not prevail and "imprison" the world with pessimism.

The call to hope on the eve of the most joyful celebration in the Christian calendar contrasted sharply with his condemnation of the attacks in Belgium and elsewhere by Islamic extremists.

Police are checking the handbags and backpacks of tourists, pilgrims, Romans and journalists who are streaming toward the square for the pontiff's traditional noontime blessing and speech on world affairs.

For years, Islamist extremists in social media have listed as potential targets the Vatican and Rome, which hosts the headquarters of the Roman Catholic church.

The pope appeared solemn Sunday as he sprinkled incense around the altar set up on the steps of St. Peter's Basilica.

In Jerusalem, the cavernous Holy Sepulcher church in Jerusalem was packed with worshippers on Sunday. The site is where Christians believe Jesus was crucified, buried and resurrected. 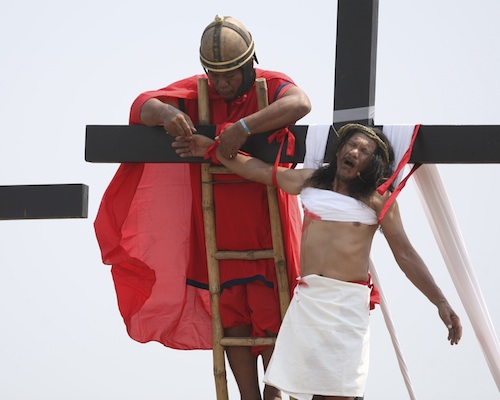 Photo: Ruben Enaje is untied and lowered down by a volunteer dressed as a Centurion after he was nailed to a wooden cross during a reenactment during Good Friday rituals on Friday, March 25, 2016 at Cutud, Pampanga province, northern Philippines. Several Filipino devotees had themselves nailed to crosses Friday to remember Jesus Christ's suffering and death, an annual rite frowned upon by church leaders in this predominantly Roman Catholic country. (AP Photo/Linus Escandor II)

A mass was celebrated later in Bethlehem's Nativity Church, built atop the site where Christians believe Jesus was born.

In the Philippines a devotee was nailed to a cross for the 30th time in an annual Good Friday ritual, which he dedicated to peace in Belgium and other countries targeted by Islamic extremists.

Ruben Enaje and 14 other men, some screaming in pain, were nailed to wooden crosses by actors dressed as Roman centurions in San Pedro Cutud and two other rice farming villages in Pampanga province north of Manila, according to organizers.

Thousands of foreign and local tourists snapped pictures of the devotees, who re-enacted Jesus Christ's suffering and death in scorching heat. Other devotees flogged their own bloodied backs with whips while walking barefoot around the dusty villages.

The gory spectacle reflects the Philippines' unique brand of Catholicism, which merges church traditions with folk superstitions. Many of the mostly impoverished penitents undergo the ritual to atone for sins, pray for the sick or for a better life, and to give thanks for what they believe were God-given miracles. 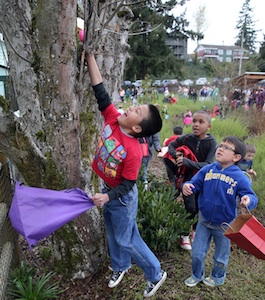 Photo: Christian Reyes,7, jumps up to get an egg hidden in a tree at the Easter egg hunt at Kiwanis Park in Bremerton, Wash., on Saturday. March 26, 2016. (Larry Steagall/Kitsap Sun via AP)

Enaje, a 55-year-old sign painter, began the annual ordeal after he fell from a three-story building in 1985 and survived nearly unscathed.

Asked what he was praying for this year, Enaje said he was saddened by the recent bombings at the Brussels airport and subway station and other attacks in the Middle East that hurt innocent people.

"What are they fighting for?" Enaje asked, referring to Islamic State group militants who have claimed responsibility for the Brussels attacks. "Even the innocent are not spared. They want to lord over the world but that can't be allowed to happen."

He expressed concern over reports that Islamic State extremists may have already influenced Muslim militants in the southern Philippines.

The Lenten rituals are frowned upon by church leaders in the Philippines, Asia's largest Roman Catholic nation, especially if the religious spectacle is used to boost tourism. The event, however, has persisted and has become an awaited tourist attraction in San Pedro Cutud village, about 70 kilometers (45 miles) north of Manila.

After 30 years, Enaje said he has thought of ending his involvement in the crucifixions in the next few years, although he remains physically fit to endure the experience, which has deepened his faith. 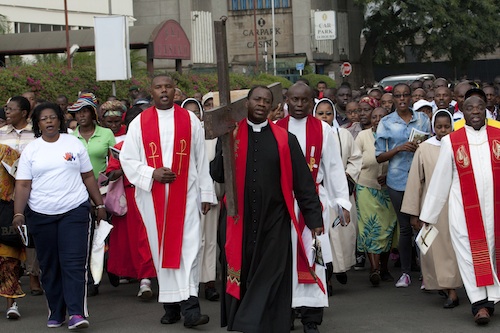 Photo: Joined by a hundred Christians, a priest carries a Cross through the streets of Nairobi, Kenya, Friday, March 25, 2016, during the Holy Week celebrations, on Good Friday. Christians around the world are marking the death of Jesus Christ ahead of Easter Sunday. (AP Photo/Sayyid Abdul Azim)

The intensity of the pain, he said, has never changed in each of the year that the four-inch stainless steel nails were hammered through the same spot in his palm and feet. When the cross is hoisted up, the movement adds to the suffering, he said.

"The only thing in my mind is that God went through worse," Enaje said.