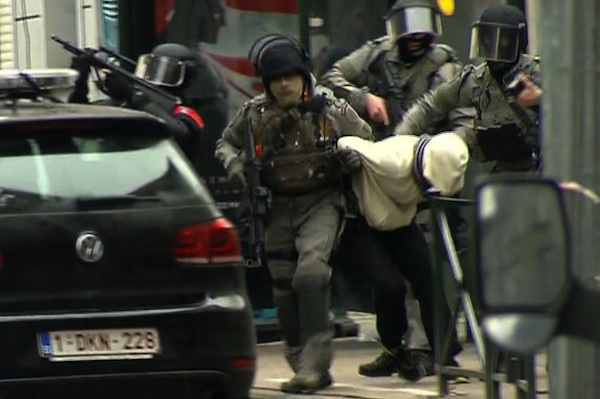 BRUSSELS (AP) — The top suspect in last year's deadly Paris attacks, captured in Belgium after four months on the run, will now face police questioning and a fast-track effort to extradite him to France.

Salah Abdeslam, a French national, is subject to a European arrest warrant issued by France. He was seized Friday in the Brussels neighborhood of Molenbeek and hospitalized after being shot in the leg.

His capture brought relief to people who have seen his "wanted" poster all over two countries for months. But French President Francois Hollande warned that more arrests will come as authorities try to dismantle a network involved in the attacks that is much larger than originally suspected. Hollande is holding an emergency defense meeting in Paris on Saturday.

Families of victims and survivors want Abdeslam to face justice in France for the Nov. 13 attacks on a rock concert, stadium and cafes, which killed 130 victims and several attackers. The Islamic State group claimed responsibility.

Once doctors consider Abdeslam fit to face questioning, he will be interrogated by Belgian investigators, possibly in the presence of French investigators.

He may be assisted by his Belgian lawyer, identified by Belgian daily Le Soir as Sven Mary.

French anti-terrorist judges could file an extradition request as early as this weekend with Belgian prosecutors.

A 2002 agreement among European Union member states speeds up the extradition process, making it a purely judicial process and removing any political aspect. For especially grave crimes, such as terrorist acts, the procedure goes even faster.

Hollande, speaking Friday next to Belgium's Prime Minister Charles Michel, said in Brussels he was sure "the French judicial authorities will send an extradition request very soon" and that "the Belgian authorities will answer it as favorably as possible, as soon as possible."

The shared French language between France and Belgium will help make the process even smoother. Abdeslam could appeal the extradition, but under the European principle of mutual recognition of judicial decisions, that would only give him a short respite.

Samia Maktouf, a French lawyer for several survivors and relatives of Paris attack victims, is urging immediate extradition. "Apart from his (medical) condition, I don't see what might delay his extradition," she told The Associated Press.

Survivors and victims' families "relief is mingled with bitterness" because some suspects are still on the run and belong to an organized and sprawling network that has yet to be stopped, Maktouf said. "Our young people found death for no reason. Today, their families have empty chairs next to them, they have a phone that doesn't ring any longer," she said.

Abdeslam, 26, is a childhood friend of the suspected ringleader of the attacks. Investigators believe Abdeslam drove a car carrying a group of gunmen who took part in the shootings, rented rooms and shopped for detonators. Most of the Paris attackers died on the night of the attacks, including Abdeslam's brother Brahim, who blew himself up.

After the bloodbath, Salah Abdeslam evaded a dragnet to return to Brussels. He was believed to have slipped through police fingers multiple times despite an international manhunt. At one point, Belgian authorities locked down their capital for several days but failed to find him.

Abdeslam and four other suspects were detained in Friday's raid, including three members of a family that sheltered him. Abdeslam was not armed but did not immediately obey orders when confronted by police, Belgian prosecutor Eric Van der Sypt said.

It was possible he had spent days, weeks or months in the apartment, according to Van der Sypt.

Two other people believed linked to the attacks were still being sought, including fellow Molenbeek resident Mohamed Abrini and a man known under the alias of Soufiane Kayal.

Abdeslam's role in the attacks has never been clearly spelled out. The car he drove was abandoned in northern Paris, and his mobile phone and an explosive vest he may have had were later found in the Paris suburb of Montrouge, raising the possibility that he aborted his mission.