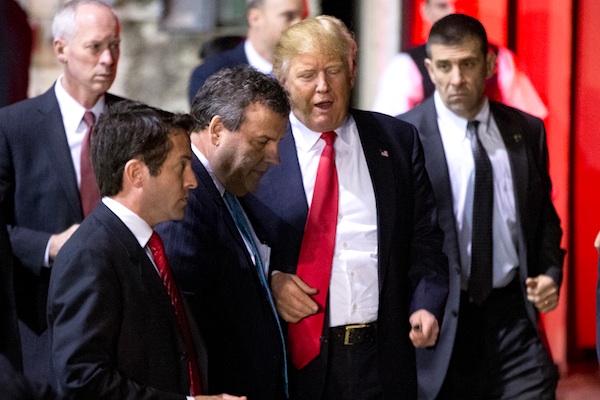 WASHINGTON (AP) — Donald Trump is displaying a spotty memory about his past views on foreign policy.

Just as he claimed to have loudly opposed the Iraq invasion before it happened, which he didn't, Trump claimed in the latest Republican presidential debate that he never called for U.S. intervention in Libya, which he did.

Some claims made in the Thursday's debate and how they stack up against the facts:

TED CRUZ: Trump "agreed with the Obama-Clinton policy of toppling the government in Libya. That was a disaster. It gave the country over to radical Islamic terrorism and it endangered America."
TRUMP: "He said I was in favor of Libya? I never discussed that subject. I was in favor of Libya? We would be so much better off if Gadhafi were in charge right now."

THE FACTS: He actually argued on numerous occasions, and fervently so, that the U.S. should intervene to stop a humanitarian disaster in Libya. He said the U.S. would have a "major black eye" if it didn't take out Moammar Gadhafi, the autocratic leader.

In a February 2011 video captured on BuzzFeed not long before the U.S. and NATO stepped in, he said, "Gadhafi in Libya is killing thousands of people, nobody knows how bad it is.

"And we're sitting around, we have soldiers all over the Middle East, and we're not bringing them in to stop this horrible carnage. And that's what it is. ... We should go in, we should stop this guy, which would be very easy and very quick, we could do it surgically. ... This is absolutely nuts, we don't want to get involved."

True to his business principles, Trump proposed sending Libya's successor government a bill for the U.S. intervention: "From your oil, we want reimbursement."

CRUZ: "The Obama-Clinton economy has done enormous damage to the Hispanic community."

THE FACTS: The bursting of the housing bubble in late 2007 is what really damaged the Hispanic community, before Barack Obama took office.

Under Obama, Hispanics have made strides from the depths of the Great Recession. Their unemployment rate is 5.9 percent. The rate is above the national average of 4.9 percent, but it's well below the 2009 peak of 13 percent.

Hispanics have gained 5 million jobs under Obama, a 25 percent increase since 2009. Under George W. Bush, there was a 21 percent growth of 3.45 million jobs.

But there is one key area where Hispanics are struggling to recover: Median income for that group was $28,757 in 2014, about $1,644 less than in 2007 after adjusting for inflation.

Cruz exaggerates when calling it the Obama-Clinton economy. Hillary Clinton was his secretary of state with little or no influence on his economic policy.

MARCO RUBIO: "It is a health care law that is basically forcing companies to lay people off, cut people's hours, move people to part-time. It is not just a bad health care law, it is a job-killing law."

THE FACTS: The claim that Obama's health care law is a job-killer is hard to square with the fact that the economy has added more than 13.4 million jobs since the law took effect. The unemployment rate has fallen to 4.9 percent from 9.9 percent since Obama signed the act.

Nor is there evidence that workers are being moved en masse to part-time hours. The number of part-time workers has actually fallen slightly since the health care law was passed: There were 27.6 million part-timers working in March 2010, and there are 26.3 million now.

To be sure, about 6 million of those with part-time jobs would prefer full-time work but have been unable to find it. That figure has declined steadily from 9 million since the Great Recession ended in June 2009, though it is still high.

The persistence of "involuntary" part-time employment has led many economists to worry that it could be a long-term problem, but they disagree on whether the health care overhaul is the root cause of that.

TRUMP on coarse language used by former Mexican President Vicente Fox over Trump's proposal to make Mexico pay for a fortress-like wall along the border: "I saw him use the word that he used. I can only tell you, if I would have used even half of that word, it would have been national scandal. This guy used a filthy, disgusting word on television, and he should be ashamed of himself, and he should apologize, OK?"

THE FACTS: At issue, it must be said, is the F-bomb. Fox dropped it when denouncing Trump's plans for the wall.

Trump, meantime, has run a profanity-laced campaign, blurted out the S-word on multiple occasions and used an offensive term for coward against rival Ted Cruz.

But what about THAT bomb?

At a rally in New Hampshire, he declared: "We're not going to let Mexico steal all our businesses. ... We're going to bring business back. ... And you can tell them to go" — pausing — "themselves because they let you down, and they left."

He didn't say the word. He mouthed it.

And Trump used the word loudly and several times in a 2011 Nevada speech before he was a candidate.

RUBIO: Repeats a flawed claim to have wiped out an insurance "bailout" in President Barack Obama's health care law. "When they passed Obamacare they put a bailout fund in Obamacare ... we led the effort and wiped out that bailout fund."

THE FACTS: Rubio was a vocal opponent of the "bailout." But Republicans weren't able to wipe it out — just to limit it. And other GOP lawmakers say Rubio did not engineer the maneuver.

At issue is a part of the health care law called "risk corridors," intended to compensate insurers that signed up sicker-than-expected patients under the health care law, incurring high costs. The government could pay just 13 percent of risk-corridor claims last year because of lower-than-expected fees paid by insurers who were doing well financially. Congressional Republicans barred the administration from using taxpayer dollars to make up the difference, but Rubio wasn't responsible for that move.

TRUMP: Challenged by former GOP presidential nominee Mitt Romney to release his tax returns, he said, "I will absolutely give my return, but I'm being audited now for two or three years, so I can't do it until the audit is finished, obviously." He further said that he's been audited for "12 years, or something like that. Every year they audit me, audit me, audit me."

THE FACTS: It was the first time Trump has mentioned audits as a reason to delay releasing his returns — after saying over the last several weeks he planned to make them public soon.

But in any event, no level of scrutiny prevents him from making his returns public, said Joseph Thorndike, a tax law professor and contributing editor to Tax Analysts, an industry publication.

THE FACTS: Trump is wrong. Romney released his 2010 tax returns and 2011 tax estimates in January of 2012, earlier in the election season than any of the current leading Republican candidates have offered comparably recent information. But Romney continued to face scrutiny over his reluctance to produce filings from earlier years, and released additional tax information during the general election campaign.

RUBIO: Trump "hired workers from Poland. And he had to pay a million dollars or so in a judgment."

THE FACTS: Rubio is at least partially correct. A labor union sued Trump in 1983 over his use of Polish immigrants in the country illegally who had been hired to help with demolition on property that would become Trump Tower. The lawsuit claimed the 200 workers had poor job conditions and were owed back pay.

The union sought about $1 million in payments to its pension fund it claimed he avoided by hiring the immigrant workers, according to a New York Times report of the case in 1990. Trump denied knowing that the workers were in the country illegally or details of their working conditions, but according to news reports a judge concluded he had known. The case was settled in 1999 and court records were sealed.

At the time, it wasn't the legal responsibility of employers to check on workers' legal status before hiring them.