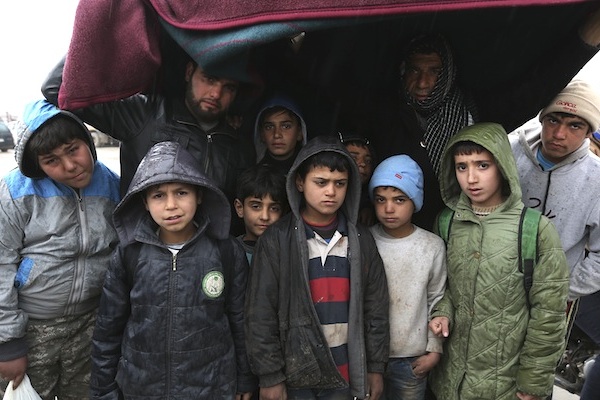 BEIRUT (AP) — Turkey came under mounting pressure to open its border Saturday as tens of thousands of Syrians fleeing a government onslaught sought entry and the European Union called on Ankara to grant them refuge.

As many as 35,000 Syrians have massed along the closed border, according to Suleyman Tapsiz, governor of the Turkish border province of Kilis. He said Turkey would provide aid to the displaced within Syria, but would only open the gates in the event of an "extraordinary crisis."

The Norwegian Refugee Council said thousands of Syrians have arrived at seven of the main informal camps close to the Turkish border. The group said the camps were already at capacity before the latest influx, and that aid groups are working around the clock to deliver tents and essential items to the displaced.

About 4.6 million Syrians have fled the country since 2011.

About 13.5 million Syrians inside the country need humanitarian assistance to survive.

Filip Lozinski, an NRC supervisor in the area, told The Associated Press that many refugee families were forced to sleep out in the open, some under trees, because they could not find shelter.

At a meeting in Amsterdam between EU foreign ministers and their Turkish counterpart, EU foreign policy chief Federica Mogherini urged Turkey to open its borders to "Syrians in need for international protection," and said the EU is providing aid to Ankara for that purpose.

EU nations have committed 3 billion euros ($3.3 billion) to Turkey for helping refugees as part of incentives aimed at persuading it to do more to stop thousands of migrants from leaving for Greece.

Turkish Foreign Minister Mevlut Cavusoglu said Saturday that his country maintains an "open border policy for these people fleeing from the aggression of the (Syrian) regime as well as airstrikes of Russia."

He said Turkey had already allowed in more than 5,000 recently displaced Syrians, but did not address the restrictions along the border.

Some of the refugees found shelter in Afrin, a Kurdish enclave to Aleppo's north controlled by a militia known as the YPG, said a Kurdish official, Idris Naasan. The militia hoped to prevent a humanitarian disaster and help those stuck at the border, he said.

Syrian President Bashar Assad's forces have been advancing across the north in recent days behind a curtain of heavy Russian airstrikes, and could soon encircle rebel strongholds in Aleppo, once the country's largest city and commercial hub. This week alone, Russian warplanes hit close to 900 targets across Syria, including near Aleppo.

Those living in parts of the city held by the rebels since 2012 fear they could be the next victims of siege tactics used across Syria by all sides in the war, which have caused widespread malnourishment and starvation.

"There is a big wave of people leaving Aleppo City because they are scared Al-Castello Highway — the only way out — will be cut off," said Osaid Pasha, an Aleppo-based activist who recently fled to Turkey.

"There are still a large number of civilians inside the city," he said.

"Like it or not, our battlefield achievements indicate that we are headed toward the end of the crisis," he told a press conference in Damascus. He called on rebel fighters to "come to their senses" and lay down their weapons.

The advance of Syrian troops and the blistering Russian airstrikes in Aleppo and elsewhere led to the breakdown of indirect peace talks launched earlier this week in Geneva, with the opposition saying there was no point in negotiating under fire. U.N. envoy Staffan de Mistura hopes to resume the talks by Feb. 25, but it's unclear if either delegation will return.

Saudi Arabia, a key backer of the opposition, meanwhile said it is ready, in principle, to send ground troops to Syria, albeit in the context of the U.S.-led military campaign against the Islamic State group.

But al-Moallem warned that Saudi or other foreign troops entering his country would "return home in wooden coffins," a line he repeated three times during the one-hour press conference.

Russia's Defense Ministry has said it has "reasonable grounds" to suspect that Turkey, another opposition ally, is preparing for a military invasion of Syria.

Turkey's President Recep Tayyip Erdogan, speaking during a visit to Senegal on Friday, dismissed the Russian claim as "laughable" and blamed Moscow for the deaths of civilians in Syria.

"They talk big," Jafari said. "But even if it happens, it won't be bad because they would be definitely defeated."

Iran on Saturday held funerals for six soldiers, including a senior Guard commander, Gen. Mohsen Ghajarian, who were killed in northern Syria while fighting alongside government troops.

Iran has said it has dispatched military advisers to Syria, but denies sending combat troops. A number of Iranians have been killed in recent months, including several high-ranking commanders.

The Lebanese militant group Hezbollah, an ally of Iran and Syria, has also sent reinforcements to Syria.

The Syrian state news agency SANA reported Saturday that a member of Hezbollah's "war media" department, which films military battles for the group, was among those killed in fighting north of Aleppo.