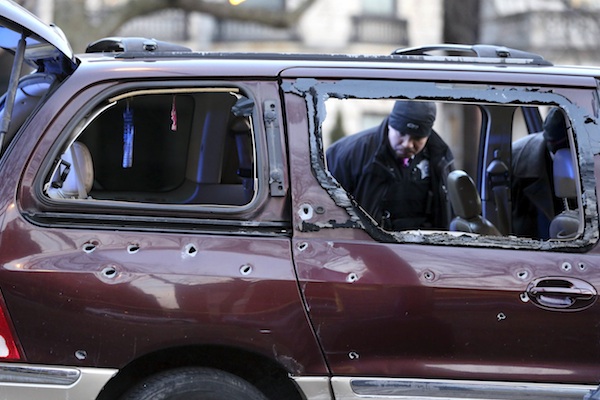 CHICAGO (AP) — A white Chicago police officer who fatally shot a black 19-year-old college student and accidentally killed a neighbor has filed a lawsuit against the teenager's estate, arguing the shooting left him traumatized.

The highly unusual suit was filed Friday in the middle of the city's effort to grapple with serious questions about the future of its police force. Those questions include the adequacy of its system for investigating police shootings and how to win back public trust after several cases of alleged misconduct. The U.S. Justice Department is conducting a wide-ranging civil rights investigation, and Mayor Rahm Emanuel has promised a major overhaul of the Police Department and steps to heal its fraught relationship with black residents.

The timing and unusual nature of the suit by officer Robert Rialmo, who is seeking $10 million in damages, could complicate the department's efforts to demonstrate more sensitivity toward the community in how police shootings are handled. His attorney, Joel Brodsky, said it was important in the charged atmosphere to send a message that police are "not targets for assaults" and "suffer damage like anybody else."

The teen's father, Antonio LeGrier, filed a wrongful death lawsuit days after the Dec. 26 shooting, saying his son, Quintonio, was not armed with a weapon and was not a threat. His attorney, Basileios Foutris, was incredulous at what he called the officer's "temerity" in suing the grieving family of the person he shot.

"That's a new low even for the Chicago Police Department," he said. "First you shoot them, then you sue them."

The lawsuit provides the officer's first public account of how he says the shooting happened, offering details that differ with the family's version. It says Rialmo, who was responding to a domestic disturbance call with another officer, opened fire after Quintonio LeGrier swung a bat at the officer's head at close range. A downstairs neighbor, 55-year-old Bettie Jones, was standing nearby and was shot and killed by accident. She was not part of the domestic dispute.

When arriving at the scene around 4:30 a.m. on Dec. 26, Rialmo rang the doorbell of the two-story apartment building. Jones answered and directed them to the upstairs apartment. As Rialmo stepped through the doorway, he heard someone "charging down the stairway," the suit says.

It describes the teen coming down the stairs with a baseball bat in hand and says LeGrier "cocked" the bat "and took a full swing at Officer Rialmo's head, missing it by inches" when the two were around 4 feet apart.

The officer then backed away with his weapon still holstered, according to the suit, while repeatedly shouting at LeGrier to drop the bat.

But the suit says LeGrier kept advancing and swung the bat again. Only when LeGrier cocked the bat again from 3 or 4 feet away, did the officer pull out his 9 mm handgun and open fire, the filing says.

As he began firing, Rialmo did not see or hear Jones behind LeGrier, the suit says. It says one of the bullets went through LeGrier's body and struck Jones, killing her.

Lawyers for Antonio LeGrier and for Jones have provided accounts that differ from Rialmo's. They say the evidence indicates the officer was 20 or 30 feet away when he fired, calling into question Rialmo's contention that he feared for his life.

Foutris also questions why the teen would attack the officer since he was the one who called 911. The father of the Northern Illinois University student also made a 911 call.

"If you're calling multiple times for help are you going to charge a police officer and try to hit him with a bat? That's ridiculous," Foutris said.

County prosecutors have asked the FBI to investigate the shooting.

A Police Department spokesman refused to comment on the officer's lawsuit.

Such a lawsuit by an officer is extraordinarily unusual, said Phil Turner, a former federal prosecutor and current defense attorney who is not connected to the case.

He questioned whether a judge would give it any merit and said it appeared intended to intimidate LeGrier's family. He said he had never heard of an officer blaming his shooting victim for causing trauma.

"That is a known part of the job," Turner said of policing's emotional toll.