Turnout Will Be Key Monday in Iowa Caucuses 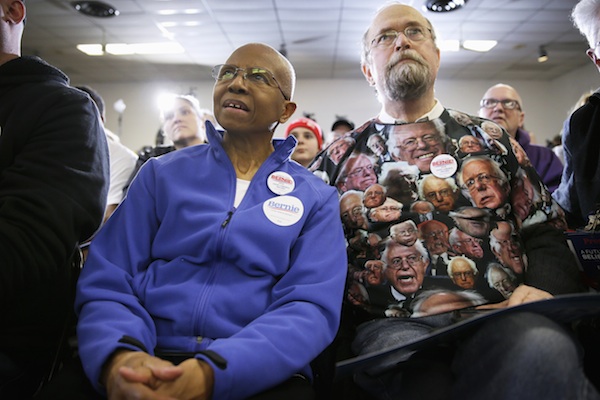 MANCHESTER, Iowa (AP) — Democrat Bernie Sanders says he's ready to stun the political world if his supporters turn out for Monday's presidential caucuses in Iowa. Donald Trump says he doesn't have to capture the first contest on the 2016 election calendar, but gives himself a good chance and sees a solid path ahead to the Republican nomination.

All the contenders are begging their backers to make it to the caucuses.

A snowfall forecast to start Monday night appeared more likely to hinder the hopefuls in their rush out of Iowa — and to New Hampshire, with its Feb. 9 primary — than the voters.

"People are really enthusiastic and if people come out to vote, I think you're going to look at one of the biggest political upsets in the modern history of our country," Sanders told CNN's "State of the Union" on Sunday.

The Vermont senator and former Secretary of State Hillary Clinton are in a tight race.

On the GOP side, Trump said "I don't have to win" in Iowa, before adding that he believes he has "a good chance" of victory.

He said he was confident of taking New Hampshire and many other contests down the road. "One of the reasons that I'll win and, I think, none of the other guys will win is because I'm going to get states that they'll never get," he told CBS' "Face the Nation," citing Pennsylvania, Ohio, Michigan, Florida, along with strong hopes for New York and Virginia.

Republican Ted Cruz directed much of his final advertising against Marco Rubio as the senators' feud grows even more bitter in the final days.

Texan Cruz, considered Trump's chief rival in Iowa, took to the airwaves to challenge the conservative credentials of Rubio, the Floridian who's running third in Iowa, according to the polls.

"The desperation kicks in," Rubio said in response. "From my experience, when people start attacking you it's because you're doing something right."

Iowa offers only a small contingent of the delegates who will determine the nominees, but the game of expectations counts for far more than the electoral math in the state. Campaigns worked aggressively to set those expectations in their favor (meaning, lower them) for Iowa, New Hampshire and beyond.

Rubio strategist Todd Harris said the Iowa goal is to end up behind the flamboyant Trump and the highly organized Cruz.

"There's no question we are feeling some wind at our back," Harris told The Associated Press. But, he added, "It's very hard to compete with the greatest show on earth and the greatest ground game in Iowa history."

In the last major preference poll before the caucuses, Trump had the support of 28 percent of likely Republican caucus-goers, with Cruz at 23 percent and Rubio at 15 percent. The Iowa Poll, published by The Des Moines Register and Bloomberg, also found Clinton with 45 percent support to Sanders' 42 percent in the Democratic race. The poll was taken Tuesday to Friday and has a margin of error of plus or minus 4 percentage points.

Cruz's campaign was challenged by Iowa Secretary of State Paul Pate over a mailer sent to potential voters that seemed designed to look like an official notice warning recipients about "low expected voter turnout in your area." The mailer refers to a "voting violation" and grades the recipient's voting history and that of several neighbors, citing public records.

Pate said Cruz's campaign "misrepresents Iowa election law." There's "no such thing as an election violation related to frequency of voting," he said, and insinuating otherwise is "not in keeping in the spirit of the Iowa caucuses."

Cruz brushed off the fuss. "I will apologize to nobody for using every tool we can to encourage Iowa voters to come out and vote," he said.