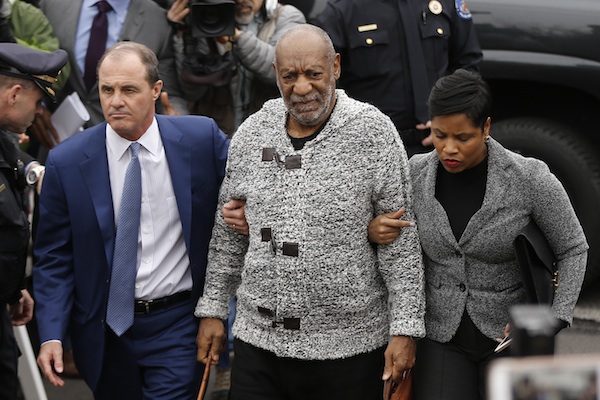 NORRISTOWN, Pa. (AP) — Prosecutors pursuing sex-assault charges against Bill Cosby say he wants special treatment in trying to have the case thrown out even before the first evidence hearing.

In a response to Cosby's motion to dismiss the case, suburban Philadelphia prosecutors alleged that Cosby may have been "committing similar crimes for decades and getting away with it, all over the country, using his celebrity and fortune to avoid the consequences."

Montgomery County District Attorney Kevin Steele also said Wednesday that there was no valid agreement to never prosecute the comedian, as a former prosecutor claimed. Former District Attorney Bruce Castor is expected to testify next month for the defense that he made the deal to persuade Cosby to testify in the accuser's 2005 civil lawsuit.

Common Pleas Judge Steven O'Neill has scheduled a Feb. 2 hearing on the defense motion to dismiss the criminal case. Cosby has not yet entered a plea, and his lawyer did not immediately return a call for comment Wednesday. In his deposition, Cosby called his feelings toward the accuser "romantic" and their encounter that night in January 2004 consensual.

Steele argued that Castor maintains he granted Cosby immunity "via a press release," but said that fell far short of a court-approved immunity agreement. He noted that the press release quoted Castor as saying he could revisit the decision later if the need arose.

"Such a need did arise, but not until July 2015, when a federal judge — over defendant's objection — made portions of his civil deposition public for the first time," Steele wrote. "This new evidence, as well as the resulting public claims by numerous women that defendant had also sexually assaulted them, triggered a renewed investigation."

Cosby also acknowledged in the deposition that he had gotten quaaludes in the 1970s to use as a seduction tool, another factor Steele said he weighed as he considered charges.

The case marks the first time that Cosby has ever faced criminal charges despite years of accusations that he had drugged and molested women.

Both Cosby and his accuser say he gave her wine and three blue pills. The key question is whether she consented to the sexual activity that followed and what the pills contained. Cosby has said they were Benadryl pills, but her lawyers believe they were something stronger that left her semi-conscious.

Cosby, though, has described her as a willing participant in what he called a "petting" session that included digital penetration. She went to police a year later, near home in Toronto, and said she had been drugged and violated.

Cosby, now 78, settled her civil lawsuit after giving four days of often-combative deposition testimony in 2005 and 2006. His testimony, released last year, includes admissions that the long-married family values advocate had had a series of affairs with young women.

Steele also objected to defense efforts to disqualify his office because the Cosby case was an issue in his fall campaign against Castor. Steele called any comments he made during the campaign "straightforward."