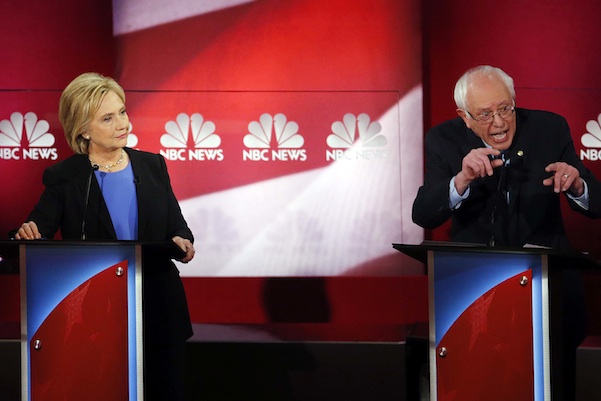 WASHINGTON (AP) — Bernie Sanders airbrushed the complexities of trying to overhaul health care all over again and Hillary Clinton offered a selective reading of her rival's record on gun control in the latest Democratic presidential debate.

A look at some of their claims and how they compare with the facts:

CLINTON on Sanders' proposal for a taxpayer-paid health care system: "I don't want to see us start over again with a contentious debate."

SANDERS: "We're not going to tear up the Affordable Care Act," but build on it.

THE FACTS: As Clinton suggests, Sanders' plan would indeed mean a radical change in direction — one that makes the government the payer of health care for everyone, not just for the elderly or the poorest Americans or members of the military.

Whether that means building on President Barack Obama's health care law or ripping it up may be a semantic argument. But at the core, Sanders would switch the country away from a private health insurance system. Employees, employers and others would pay higher taxes in return for health care with no premiums or deductibles, a striking departure from the subsidies and conditions that Obama's law has overlaid on the existing system.

Clinton did not exaggerate in describing the huge political battle that it took just to achieve "Obamacare" and the inability to sell Congress on a taxpayer-paid system even when Democrats were in control. (She ran into her own buzz saw on the issue when she proposed an overhaul of health care as first lady under her husband's administration.)

Clinton's team and her supporters have persisted in a dubious, if not bogus, argument that Sanders would wreck Medicare and other health-care entitlements with his proposed overhaul. It would do so only in the course of establishing a health care system in which traditional Medicare, Medicaid and more would no longer be needed — because the government would be insuring everyone.

She made that argument herself in an earlier debate but did not repeat it Sunday night.

CLINTON on effects of Obama's health care law: "We now have driven costs down to the lowest they've been in 50 years."

THE FACTS: Not so. Health care spending is far higher than a half century ago. What she must have meant is that the rate of growth of health care spending year to year is lower than it's been in 50 years — closer to the truth, but still not right.

The government reported in December that health care spending in 2014 grew at the fastest pace since Obama took office, driven by expanded coverage under his law and rising drug prices. Not only that, but health care spending grew faster than the economy as a whole, reaching 17.5 percent of GDP. That means health care was claiming a growing share of national resources.

This was after five years of historically low growth in health spending — the decline Clinton was trying to address. But the lull in health care inflation was attributed in large measure to the recession that Obama inherited and its aftermath, not his law. And part of the reason health spending increased after that was because of the economic recovery.

SANDERS: "I have a D-minus voting record from the NRA." ''I have supported from Day 1 an instant background check," as well as a ban on assault-type weapons.

CLINTON: "He voted against the Brady bill five times," as well as for allowing guns in national parks and for shielding the gun industry from lawsuits.

THE FACTS: Both are singling out aspects of Sanders' record that suit them, but that record is nuanced. Sanders indeed supported an instant background check, and at certain points a three-day waiting period. But he opposed longer waiting periods — of five or seven days — which gun control advocates see as a more effective way to flag people who should not be getting a gun.

Clinton is right that he opposed various versions of the Brady bill with longer waiting periods. But his poor marks from the NRA reflect a record that does lean toward stronger gun controls. Sanders now says he would support exposing gun makers to lawsuits.

CLINTON: "One out of three African-American men may well end up going to prison. That's the statistic."
THE FACTS: That's a stale statistic, and Clinton isn't the only person to use it. Sanders has said nearly the same thing. Both drew on 13-year-old data that stated this as a projection, not a fact.

A 2003 report from the Bureau of Justice Statistics said, "About 1 in 3 black males, 1 in 6 Hispanic males, and 1 in 17 white males are expected to go to prison during their lifetime, if current incarceration rates remain unchanged." But it went on to say that at the time, 16.6 percent of adult black males had actually ever gone to prison, or 1 in 6. The incarceration rate for black men has gone down since then, according to the Sentencing Project.

SANDERS: "You have three out of the four largest banks today, bigger than they were when we bailed them out. ... I think it's time to put the government back on (the banks') backs."

CLINTON: "We have Dodd-Frank. It gives us the authority already to break up big banks that pose a risk to the financial sector."

THE FACTS: It's true, as Clinton said, that the 2010 financial overhaul law, known as Dodd-Frank, already gives the president the authority to force large banks to break up. Sanders has pledged to use that power if elected, while Clinton has not.

Yet such a move would require the support from numerous regulators, potentially including the chair of the Federal Reserve and head of the Federal Deposit Insurance Corp. Sanders would appoint some of those regulators, if elected, but the Senate would have to approve them, and it's unlikely that anyone supporting breaking up the banks would win Senate approval.

Dodd-Frank has also given the government more tools to regulate banks and potentially wind them down if they fail, rather than bail them out. Yet despite Clinton's faith in the law's ability to curb Wall Street's excesses, many of those provisions have not yet been tested and analysts disagree on how effective they will be.

Dodd-Frank also requires large banks to hold more capital as a cushion against loans that might go sour and subjects banks to "stress tests" to ensure they can survive economic downturns. Those greater capital requirements have caused many banks, including JPMorgan, Goldman Sachs and Citi, to shed assets in order to avoid growing larger and triggering further oversight.

SANDERS: "This is a responsibility for the U.S. Justice Department to get involved. Whenever anybody in this country is killed while in police custody, it should automatically trigger a U.S. attorney general's investigation."

THE FACTS: The department already investigates some such deaths, but focuses only on those in which a federal civil rights violation appears possible, such as if there's an indication that an officer knowingly used unreasonable force.

A blanket trigger such as what Sanders proposes would strain resources, because hundreds of Americans are killed annually in confrontations with police, and it might be at odds with the department's emphasis on enforcing federal rather than local laws.

Though police shootings invariably draw the attention of federal investigators who monitor events on the ground, only a small number prompt federal probes and even fewer result in criminal charges.

Federal investigations are time-consuming and to build a case, prosecutors must satisfy a challenging legal burden — establishing a willful and knowing civil rights violation. In perhaps the most notable case of the last two years, the Justice Department opened an investigation after the fatal August 2014 shooting of 18-year-old Michael Brown, but ultimately closed the probe without bringing any charges.