Clinton Challenges Sanders on his Record Voting in Congress 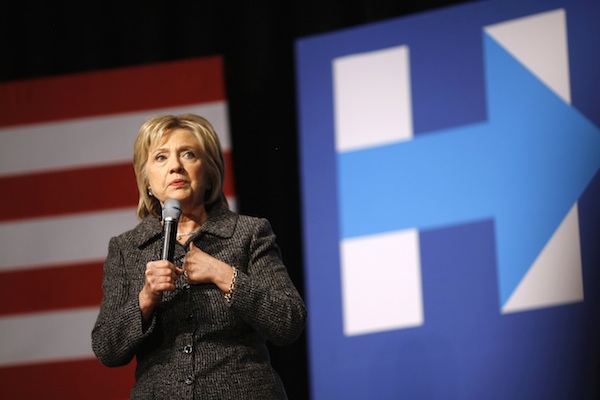 KEENE, N.H. (AP) — Bernie Sanders casts himself as the voice of anti-establishment politics, fueling his insurgent rise in the Democratic primaries as a principled fighter unwilling to compromise for political gain.

But he's also a 25-year veteran of Congress.

Now, with his campaign locked in a tight race against Hillary Clinton in Iowa and New Hampshire, he's facing attacks about inconsistencies in his voting record — raising questions that could undermine not only his presidential aspirations, but the brand he's cultivated over the course of his political career.

Sanders has spent months framing Clinton as a typical politician, arguing that she has switched her views on issues like trade, gay marriage and the war in Iraq for political gain.

"I have been fairly consistent my entire political life," Sanders said in an interview on MSNBC last week. "What we have seen over the years, as you have indicated, in many ways, Secretary Clinton has been flip-flopping."

But he too has been forced to fend off questions about his positions, particularly legislation proposing a single payer health care plan and 2005 support for a bill that protected gun manufacturers from liability in mass shootings — a vote Clinton has made central to her attacks.

"It's not a mistake," Sanders said at a Democratic forum in Iowa on Monday. "Like many pieces of legislation, it is complicated."

Clinton on Wednesday called Sanders a "pretty reliable vote for the gun lobby" in an interview with NBC and her campaign pressed Sanders to release financial details of how he would pay for plans to create a single-payer health care system through Medicare, asserting it would undermine President Barack Obama's health care law.

Former Obama aide David Axelrod said the past votes could cause complications, noting the gun votes represented a rare instance in which Sanders is out of step with the party's progressive base.

"Suddenly, instead of the political leader of an anti-establishment movement, you're a 25-year veteran of Congress trying to split hairs," Axelrod said. "That's not the place you want to be."

The Sanders campaign did not immediately respond to a request for comment.

While Sanders' laser-like focus on economic inequality has been a constant theme of his career, his concern about wages has, at times, placed him on the opposite side of other Democratic priorities.

In 2007, he cast six ballots to stop comprehensive immigration reform legislation sponsored by Arizona Sen. John McCain and the late Massachusetts Sen. Ted Kennedy from advancing to a vote, citing concerns that foreign guest worker programs would drive down wages and benefits for U.S. employees.

"It makes no sense to me to have an immigration bill, which over a period of years, would bring millions of 'guest workers' into this country who are prepared to work for lower wages," said Sanders in a June 2007 statement.

Sanders aides said he voted against the legislation because it "lacked badly needed protections for immigrant workers," noting that it was also opposed by Hispanic advocacy groups.

Though Sanders opposed the October 2002 resolution authorizing the war in Iraq — a vote he frequently cites to contrast his initial position on the war against Clinton — he backed another resolution "expressing the unequivocal support and appreciation" for the president and military forces participating in the Iraq invasion only five months later.

That same March 2003 resolution also praised President George W. Bush for his "firm leadership and decisive action in the conduct of military operations in Iraq."

Sanders later defended his vote by saying he thought it was "appropriate" to honor Vermont veterans.

"This state has lost a number of young people who served, so I thought it was appropriate to say, yeah, we thank you, even though I opposed the war," he said in an October 2012 Senate debate.

And he supported the 1994 crime bill, now the subject of derision from activists and lawmakers who say the law ushered in an era of mass incarceration, even after he delivered a floor speech citing low wages, high childhood poverty and a lack of investment in education as the reason for some crime.

Sanders aides said he backed the bill despite his reservations because it included an assault weapons ban and other provisions he supported.

"There were too many important provisions within the bill for Sen. Sanders to cast a vote against the entire package," his campaign said in a statement.

Since being elected into Congress in 1990, Sanders has introduced his plan for single-payer health care 11 times, including a 2.2 percent increase on income taxes and as much as an 8.7 percent increase in payroll taxes in nine of those proposals.

That tax has become a touchpoint in his presidential race, with Clinton accusing him of planning to raise taxes on middle-class Americans.

"He's introduced legislation nine times that has laid out a very specific plan to take everybody's health care and roll it into a great big bundle and hand it to the states," she said in the interview on NBC Wednesday.

Sanders aides say the campaign version of his plan — called Medicare for all — can be paid for without that tax, though his campaign cannot say when that new proposal will be released.

They directed reporters to a video of Clinton from the 2008 primaries against Obama in which she said it "undermined core Democratic values" to attack each other's health care plans. "Clinton's attacks on a Democratic Party rival over universal health care marks a very public flip flop by her and her campaign," the senator's campaign said.