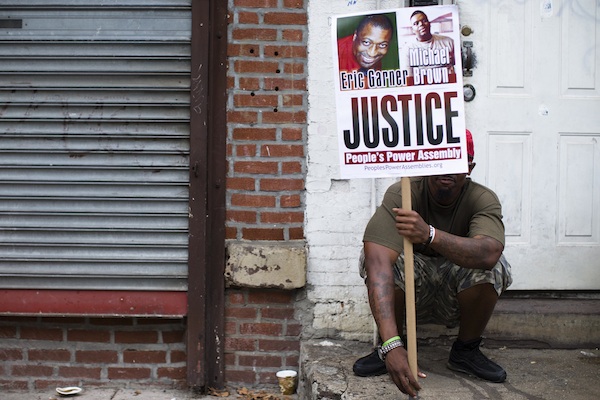 NEW YORK (AP) — A sergeant has been stripped of her gun and badge and charged internally in the July 2014 chokehold death of Eric Garner, the first official accusation of wrongdoing in the case that helped spark a national movement on the role of race in policing.

Sgt. Kizzy Adonis was one of the supervising officers at the scene of Garner's death on Staten Island during an arrest on suspicion of selling loose, untaxed cigarettes. She was not part of the team out investigating that day, but heard the radio call and was nearby and responded to the scene. Adonis is black, so was Garner.

Officials said Friday she was charged with failure to supervise, an internal disciplinary sanction. Sgt. Ed Mullins is the head of her union and calls the charge ridiculous and political.

"She didn't have to go there — she chose to go there to help out, and look what happens," he said, adding it was Commissioner William Bratton, not Adonis, who is to blame. "This incident stems from failed policies that ultimately led to the death of Eric Garner."

The encounter, caught on video by an onlooker, spurred protests about police treatment of black men.

Garner, an asthmatic father of six, was seen yelling "I can't breathe!" 11 times before losing consciousness. The medical examiner found the chokehold contributed to his death. Coupled with police killings of unarmed black men elsewhere in recent months, The death became a flashpoint in a national debate about relations between police and minority communities.

No one else in the case has yet to face departmental charges, and the internal disciplinary review is on hold pending a federal inquiry, at the request of the U.S. Attorney General for the Eastern District. Officer Daniel Pantaleo, who is white and who applied the hold, remains on desk duty. A grand jury refused to indict him on criminal charges; he has said he was using a legal takedown maneuver.

But Adonis had been promoted to sergeant about two weeks before Garner's death, and under departmental policy, her probationary term would have been up had they not levied charges. She will now remain on probation, until her internal case is completed.

"The NYPD, in consultation with the United States Attorney's office, served the departmental charges at this time in order to preserve the disciplinary statute of limitations and all further proceedings concerning the Garner inquiry will continue to be stayed until the conclusion of the federal investigation," the department said in a statement.

Internal charges can lead to loss of vacation days up to dismissal from the department. Garner's family settled with the city for $5.9 million.