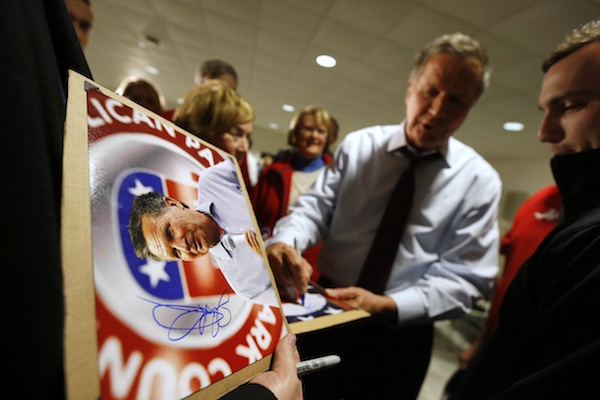 DES MOINES, Iowa (AP) — It's been a year of town halls and weekend forums and lunchtime meet-and-greets for those who would be president, with nights spent sparring in televised debates and endless days fundraising to pay for TV ads, direct-mail fliers and organizers to get out the vote.

All of it is aimed at people like Jocelyn Beyer, a Republican from the small town of Sully in rural central Iowa, who says despite the many months of political clamor, she's only just now starting to think about her vote for the White House.

"I can't say I've paid much attention," Beyer said. "The moral issues are what I focus on. If I had to vote today, I'd vote for Ted Cruz."

While that's not a solid "yes" for the Texas senator, at least he's doing better with Beyer than he is with Brian Metcalf, a Republican from nearby Pella. Metcalf is thinking about Cruz, but also former Florida Gov. Jeb Bush and Sen. Marco Rubio, R-Fla.

That is, when he's spending any time thinking about the race.

"Until now, it's just been noise," he said. "But I'd like to see someone with a Reagan-esque approach."

For all the attention showered on early state voters in the past year by candidates, their unpaid volunteers and high-dollar admakers — and, yes, journalists, too — the truth is that what happened in 2015 was only the pregame show.

The race for the White House starts in earnest this week as voters such as Beyer and Metcalf begin to tune in and the candidates try to win them over during a four-week sprint to the leadoff Iowa caucuses on Feb. 1. It's then that voters have their first say and push pundits, predictions and polls aside.

"The race is still fluid," said Beth Myers, who managed 2012 GOP nominee Mitt Romney's campaign and supports Bush in 2016. "There's still a twist or two in this primary story that we don't know yet."

It's easier to start with the Democrats.

Independent Sen. Bernie Sanders of Vermont hopes an upset in Iowa and a victory in the New Hampshire primary a week later will dent the apparent inevitability of front-runner Hillary Clinton. Wins in the first two states for the former first lady, New York senator and secretary of state would all but cement her place atop her party's ticket.

There is no such clarity in the Republican race.

Despite shedding five candidates before New Year's Day, the GOP contest is an unpredictable mix of a dozen hopefuls with vastly different visions for the party and the country.

Ahead now in Iowa is Cruz, who spent 2015 quietly building a traditional campaign organization and will kick off his month with a bus tour — six days, 28 cities — covering the state's most fertile ground for Republicans.

Candidates often try to recruit a political leader to stand for them in each of Iowa's 99 counties. Cruz has also sought a pastor in each to do the same, hoping to corner the market on the evangelical voters who make up a significant part of the GOP caucuses.

"For Cruz, it's about the complete consolidation of the evangelical wing to snuff the life from the others," said Phil Musser, a Republican consultant who is not affiliated with a campaign.

While Cruz has edged ahead in preference polls of Iowa voters in recent weeks, nationally, he still trails the unquestioned political star of 2015: Donald Trump.

The billionaire real-estate mogul has so far forgone the grind-it-out approach in favor of free media exposure and a few rallies a week in front of largely adoring crowds.

"He says what everybody's thinking, and he's not afraid to say it," said Trump supporter Bill Kullander of Des Moines.

The unknown for Trump: Are Kullander and the thousands of others who pack the bleachers at Trump's rallies and tell pollsters he's their top choice for the GOP nomination likely voters? Or are they merely fans entertained by his show?

"If I do have a frustration, it's that we're being led by the nose, and the news media is led by the nose, to think that somehow Trump is going to win this because of these polls," Kentucky Sen. Rand Paul, whose numbers in preference polls hardly register by comparison, said Sunday in an interview with NBC.

"The polls don't, I believe, capture who's going to actually vote."

Voters are not likely to find Trump dropping in at one of Iowa's many Pizza Ranch restaurants to ask for their support, as Cruz will do on his bus tour. But Trump's top adviser in Iowa is a veteran organizer who ran former Pennsylvania

Also, it's notable that after almost no paid advertising in 2015, Trump said last week he plans to start spending at least $2 million a week on TV ads in Iowa, New Hampshire and South Carolina, which holds the South's first primary on Feb. 20.

Neither Cruz nor Trump will win the nomination with a victory in Iowa, but caucus-goers probably will deliver a verdict on whether several GOP candidates continue on to New Hampshire. Count Santorum and former Arkansas Gov. Mike

Huckabee, who won the caucuses in 2008, in that group, and maybe retired neurosurgeon Ben Carson, too.
Carson was an early favorite in Iowa among evangelical and tea party conservatives, but he enters January without several members of his senior staff. They quit last week and questioned his readiness for the White House on their way out.

Candidates with more traditional political experience will spend the month trying to bridge the gap between the anger and frustration that's powered Trump's rise and the Republican establishment, which desperately wants to win after eight years out of the White House.

For Rubio and Bush, as well as New Jersey Gov. Chris Christie and Ohio Gov. John Kasich, that likely means lighting the match with a strong finish in Iowa, then igniting their bid with a win in New Hampshire.

"The most important thing to watch is what happens in New Hampshire," said GOP presidential adviser Charlie Black.

"That's going to set the field in terms of a mainstream candidate."

Rubio, criticized for not spending enough time in the early voting states, has started to campaign more aggressively in New Hampshire, including three town halls and a football-watching party with voters on Sunday. "This is the first primary in the country, in many ways the first step toward a new America," Rubio said during a morning visit to Milford.

After falling far enough late in 2015 to get relegated to an "undercard" debate, Christie has rebounded and is getting a second look in New Hampshire, where he has spent more time than any candidate. Bush, too, has reshuffled his so-far lackluster bid and focused since November on New Hampshire.

His closing message, having tried several since entering the race in June as the early front-runner, is a direct challenge to Trump.

"He'll do damage to the conservative cause and we've got to take a stand," Bush said. "And for some odd reason I'm the only guy willing to do it."