Chicago Officer Asked for Taser Before Laquan McDonald Was Shot 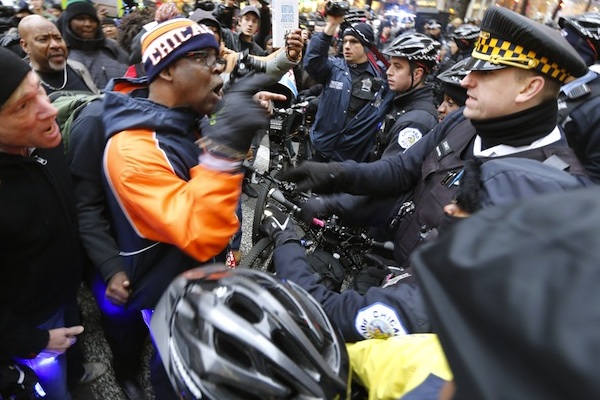 CHICAGO (AP) — Recordings of Chicago police radio traffic surrounding the fatal shooting of a black teenager by a white officer show at least one responding officer asked for a Taser and — given that squad-car video lacks audio — offer a partial glimpse of officers' discussions as events unfolded.

The recordings obtained Wednesday by WMAQ-TV through a Freedom of Information Act Request show that one officer pursuing 17-year-old Laquan McDonald on Oct. 20, 2014, asked if others in the area had stun guns, which are used to subdue suspects with non-lethal force.

The year it took to charge Officer Jason Van Dyke for fatally shooting McDonald led to allegations of an attempted cover-up, a federal civil rights investigation of Chicago police and a series of protests, including Thursday along the city's Michigan Avenue shopping district.

"Someone have a Taser?" one officer is heard asking on the radio, then describing McDonald. "This guy is walking away but he's got a knife in hand."

A dispatcher responded that one was on its way, then immediately asked if any units closer to the scene could help.

"All right, anybody have a Taser — help out. ... Looking for a Taser, armed offender," she said.

None of the officers who spoke appeared to be anxious until one radioed, "Shots fired by police, get an ambulance over here."

"You guys OK?" a dispatcher asked.
"10-4, everything is fine — roll an ambulance over here," one officer answered.

Van Dyke shot McDonald 16 times, even as the teen crumpled to the ground. Police released dashcam video of the killing last month after a judge ordered them to do so and prosecutors charged Van Dyke hours earlier.

Many of the placards and chants targeted Mayor Rahm Emanuel, calling on the Chicago Democrat and onetime White House chief of staff to President Barack Obama to step down. One demonstrator held up a sign that read, "Shopping for a New Mayor."

The demonstrators included a Catholic priest from a heavily Latino part of Chicago. Father Jose Landaverde sat down in the middle Michigan Avenue with other demonstrators at one point, clutching a placard that read, "Rahm Resign."
"We cannot keep a mayor who covers things up," he said.

Emanuel apologized for the handling of the McDonald case during a city council speech earlier this month, though he has denied participating in any cover-up.

As many officers as protesters, many on police bikes, shadowed the demonstrators. At one point, several protesters briefly blocked the entrance to an Apple Store, chanting, "No justice, no profits."

Van Dyke is set to be arraigned Tuesday on a first-degree murder charge.