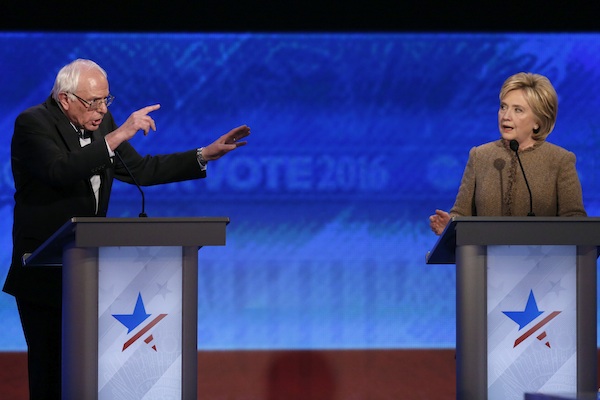 A look at some of the statements Saturday night and how they compare with the facts:

CLINTON on rising premiums and out-of-pocket costs for the privately insured after enactment of Obama's health care law: "I would certainly build on the successes of the Affordable Care Act and work to fix some of the glitches."

SANDERS on his proposed single-payer health care system: "The average middle-class family will be saving thousands of dollars a year."

THE FACTS: Obama's law was mainly about expanding coverage for the uninsured, and even former officials of his administration say major work still has to be done on cost control. In other words, rising costs are more than "glitches."

One of the health care law's main brakes on costs — a tax on high-value workplace coverage — has been put on hold by the new federal budget deal. Clinton had called for complete repeal of that levy, known as the Cadillac tax. Many economists believe the tax would help keep costs in check by forcing people into leaner insurance plans.

Sanders says his plan for a government-run health care system along the lines of Canada's and Western Europe's would save money for families and taxpayers. But such a major transition would involve winners and losers, as well as new taxes in place of premiums.

When the nonpartisan Congressional Budget Office looked at the concept back in the early 1990s, it concluded that a single-payer system had the potential to save money but that wasn't guaranteed. Moreover, individuals would have less freedom to choose their insurance packages, a trade-off that not everyone would accept.

SANDERS: "The cost of college education is escalating a lot faster than the cost of inflation. There are a lot of factors involved in that. And that is that we have some colleges and universities that are spending a huge amount of money on fancy dormitories and on giant football stadiums."

CLINTON: "States have been disinvesting in higher education ... So states over a period of decades have put their money elsewhere; into prisons, into highways, into things other than higher education."

Demos, a left-leaning think tank, said in a May study that the decline in state funding accounted for 79 percent of tuition hikes between 2001 and 2011. Just 6 percent was due to construction costs.

Sanders would make up that lost government money by providing free tuition, paid for with a tax on financial transactions. Clinton would offer federal dollars to encourage states to do more and keep students from having to borrow. It's unclear how either plan would control colleges' costs, though.

SANDERS, apologizing for his campaign improperly gaining access to Clinton campaign data, raised the possibility that Clinton's campaign may have done the same thing. "I am not convinced that information from our campaign may not have ended up in her campaign," he said.

THE FACTS: Sanders is speculating, at best. There's no evidence so far that Clinton's campaign has accessed Sanders' voter lists.

During a conference call with reporters on Friday, Clinton's campaign manager, Robby Mook, said he could "unequivocally tell you that no member of our staff stole data from theirs." And the contractor that manages the campaign data for the Democratic Party, NGP-VAN, issued a statement Friday saying "our team removed access to the affected data, and determined that only one campaign took actions that could possibly have led to it retaining data to which it should not have had access."

THE FACTS: Clinton appears to be blaming the entire estimated death toll of the Syrian civil war on just one side: the forces of Syrian President Bashar Assad. Yet no matter how vicious his forces have been, deaths have come at the hands of all sides in the nearly 5-year-old multi-front civil war.

The Syrian conflict began with anti-government protests before spiraling into a war with many groups emerging in opposition to the brutal regime crackdown. Rebels in some of these groups are fighting and killing each other, in some cases with no involvement by Assad-backed troops.

The United Nations has estimated a death toll of 220,000 since 2011; other estimates are higher, and Clinton's figure is roughly in line with them. But the death toll is attributable to all parties, not just to Assad.

SANDERS: "Middle class in this country for the last 40 years has been disappearing."

THE FACTS: It's no secret that the middle class is struggling. The costs of college, health care and housing continue to rise, while wages have barely budged for two decades. The Pew Research Center reported earlier this month that the majority of Americans are no longer "middle income."

Things are not quite as dire as Sanders suggests.

Pew found the share of Americans that it defines as middle income — a family of three earning $73,392 — has slipped. It's down to 50 percent of households from 61 percent in 1971.

More Americans are low income, but more are also upper income. "The closer look at the shift out of the middle reveals that a deeper polarization is under way in the American economy," Pew concluded.

Pew defines the median upper income as starting at $174,625 — a lot of money, but hardly the billionaire class attacked by Sanders.

SANDERS: "One of the heroes who we should recognize in the Middle East is King Abdul II of Jordan. This small country has welcomed in many refugees."

THE FACTS: With each new debate, the presidential candidates come closer to getting the Jordanian king's name right.

Among Republican and Democratic contenders alike, King Abdullah II is considered an important figure in the struggle for stability in the Middle East. But darned if they can nail down his name.

Sanders said Abdul instead of Abdullah. Invoking the king again, he mumbled the name.

Still, that was an improvement from the Republican debate earlier in the week, when New Jersey Gov. Chris Christie vowed: "When I stand across from King Hussein of Jordan and I say to him, 'You have a friend again sir, who will stand with you to fight this fight,' he'll change his mind."