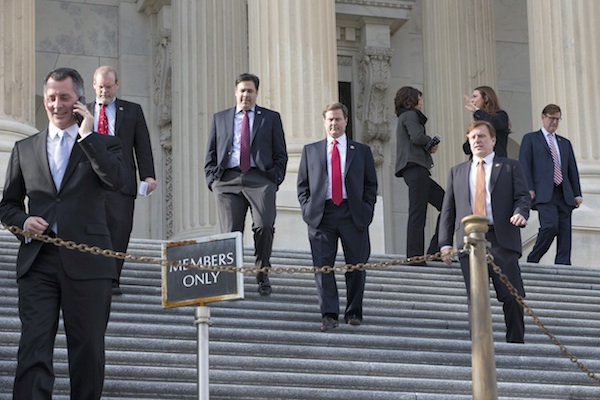 WASHINGTON (AP) — The White House and top lawmakers want to wrap up a year's worth of budget work and let Congress adjourn this coming week until 2016. There are two major bills: A $1.1 trillion government-wide spending measure and a broad renewal of expiring tax breaks for businesses and individuals that could cost hundreds of billions of dollars over the next decade.

THE SPENDING BILL, AND WHAT WON'T HAPPEN

Guided by a bipartisan deal struck in October, President Barack Obama and congressional Republicans have settled most of their differences over 2016 spending by government agencies. With Republicans dominating bill details, the departments of Veterans Affairs, Justice and Defense will get the healthiest increases, while Housing and Urban Development and the Environmental Protection Agency won't do as well.

In past years, such bills have led to partisan standoffs that threaten federal shutdowns, but that won't happen this time. Congress approved legislation on Friday financing government through Wednesday, giving lawmakers time — they believe — to craft and approve a final deal. And facing a certain Obama veto, Republicans have omitted two flashpoints from the huge package: Language unraveling the president's 2010 health care overhaul and halting federal payments to Planned Parenthood.

FIGHTS OVER ENVIRONMENT AND ENERGY

Republicans want to block new Obama administration emissions standards for power plants, thwart a rewrite of clean water rules, prevent curbs on "fracking" on federal lands and limit new ozone regulations. They also want to end the 4-decade-old ban on U.S. oil exports. In exchange, Democrats want a permanent extension of tax breaks for solar and other alternative energy sources. This issue could play out in the spending measure or the tax bill.

Some lawmakers want to block Obama from easing travel restrictions to Cuba, part of administration efforts to improve ties with the communist-run nation. Reacting to last month's Paris attacks, Republicans want to include a House-passed bill restricting Syrian refugees trying to enter the U.S. Faced with an Obama veto threat, that may be replaced by a measure, approved with bipartisan support by the House, restricting visa-free entry into the U.S. by many foreigners.

Senate Majority Leader Mitch McConnell, R-Ky., wants to lift campaign spending limits by party committees on behalf of federal candidates. The trucking industry wants to allow longer tandem trucks and block rules requiring added rest for drivers. Financial companies want to ease tighter regulations imposed by the 2010 Dodd-Frank law. With an existing program expiring, Northeastern lawmakers want to provide benefits for emergency workers sickened by the 9/11 attacks. And there are efforts to repeal a law requiring that meat be labeled with its country of origin, to renew nutrition standards for school lunches and to block mandatory labels for genetically modified foods

THE TAX BILL AND ITS PRICE TAG

This measure would renew around 50 expiring tax breaks for individuals and businesses. A bare bones version could cost around $100 billion over the next decade, but potential add-ons could swell its cost to $700 billion or more. It would be paid for by government borrowing, meaning federal deficits would grow.

Republicans would like to permanently renew expiring tax breaks for business costs for research and development and for purchasing equipment. Democrats want to make permanent some tax credits for college students and families with children, and earned income tax credits for lower-earning married couples and families with more than two children. Without congressional action, those tax breaks diminish in 2018. Republicans and some Democrats also want to permanently allow people in states without income taxes to deduct local sales taxes on their federal tax returns. Republicans and some Democrats also want to delay taxes from Obama's health care law on high-cost health insurance policies, which don't take effect until 2018, and suspend the current 2.3 percent tax on some medical devices.