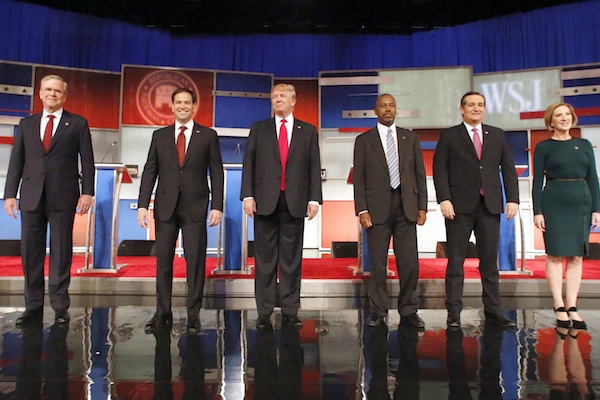 With less than 60 days before the leadoff presidential caucuses, Republican candidates traversed Iowa Saturday trying to convince voters to back them for the presidential nomination.

Speaking to reporters before a candidate forum in Cedar Rapids, Cruz said Republican voters are starting to coalesce behind his candidacy. The Texas senator said his support was growing stronger as the time to vote draws near.

"They are looking not for a campaign conservative who talks a good game on the trail, they want a consistent conservative," Cruz said. "In the wake of the Paris attacks and the wake of San Bernardino, voters are looking for a strong commander in chief."

Cruz, who entered and exited to a standing ovation from the crowd, promised to "utterly destroy" Islamic terrorists.

"We will carpet-bomb them into oblivion," Cruz said. "I don't know if sand can glow in the dark, but we're going to find out."

Front-runner Donald Trump urged supporters at a rally in Spencer to do all they can to make it to the caucuses on Feb. 1. Many of Trump's supporters have not voted in previous presidential contests, and a hoarse Trump said a strong showing was essential for his campaign — and turning out is everything.

The Iowa caucuses — which are heavily influenced by evangelical Christians on the Republican side — can give a candidate momentum, but have not always been a strong predictor of the eventual Republican nominee. In 2012 former Pennsylvania Sen. Rick Santorum eked out a win and in 2008 former Arkansas Gov. Mike Huckabee was the victor. Neither won the nomination.

Carson, in response to questions from reporters following his speech in Cedar Rapids, attributed his recent drop in Iowa polls to "a feeling that I don't know anything about foreign affairs." But he said he wasn't worried.

"This is a marathon, it's not a sprint," Carson said. "Poll numbers go up and down, they have been since the beginning and they will continue to do so. ... My job is to continue to tell the truth and be who I am and let the people make the decision."

National security was a top issue for the candidates, following the San Bernardino massacre and the recent attacks in Paris.

Cruz defended his call for prayers in the wake of the mass shooting in San Bernardino.

"There has never been a time in the history of this country where we needed prayer more," Cruz said to cheers.

Before his event, Trump repeated to reporters recent comments that the U.S. should target terrorists' families, saying: "We have to start looking at families now, we have to look at 'em very tough." He gave no specifics, however.

Cruz was one of five candidates who spoke at an event sponsored by the tea party-backed FreedomWorks. Before his speech, Cruz defended his vote earlier this year to eliminate the National Security Agency's bulk phone-records collection program and replace it with a more restrictive measure to keep the records in phone companies' hands. The more restrictive program went into effect four days before the San Bernardino shooting.

"The reason this terror attack occurred is not that the federal government needs to see yet more private information from law-abiding citizens," Cruz said.