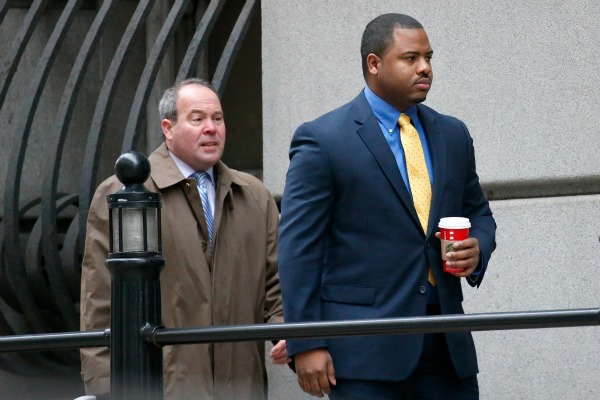 BALTIMORE (AP) — Seven months after Baltimore erupted in riots over the death of Freddie Gray, the first of six police officers charged in the case went on trial Wednesday, with a prosecutor saying the patrolman could have saved Gray's life simply by pushing a button on his uniform to call for a medic.

Officer William Porter wasn't involved in Gray's initial arrest in April, but he was present at five of six stops that a police transport van made during a 45-minute ride after Gray was taken into custody, prosecutors said. At one point, Porter asked Gray if he needed a medic, and Gray replied that he could not breathe and could not move from the floor of the van, where he had been placed head-first, in plastic handcuffs and leg shackles.

Instead of calling a medic, prosecutors say Porter picked Gray up from the floor and placed him in an upright position on the bench, and did not secure him in a seatbelt.

"The defendant alone is on trial for what he did, or more importantly, what he did not do," prosecutor Michael Schatzow said during opening statements.

Gray's death triggered protests and rioting in the city, and helped fuel the Black Lives Matter movement. The troubles forced an incumbent mayor in the throes of a re-election campaign to drop out of the race, and toppled the career of a reform-minded police chief. The Baltimore homicide rate skyrocketed at a pace unseen in decades.

His attorneys were to present their opening statement later Wednesday.

According to a pretrial filing, Porter told investigators that arresting Gray "was always a big scene" and indicated that he knew of a previous arrest in which Gray allegedly tried to kick out the windows of a police vehicle.

"You know, so he was always, always, like, banging around," Porter said in the filing.

Porter will likely take the stand in his own defense.

Gray, 25, died April 19 of a severe spinal injury he suffered while riding in the back of police van without a seatbelt, a violation of department policy. Gray arrived at a police station unresponsive, was taken to a hospital and died a week later.

Prosecutors said Gray's spinal injury occurred in a section of the spinal cord where the nerves control the chest and the diaphragm. Such an injury would have impacted Gray's ability to breathe, Schatzow said.

"He had a duty to keep safe persons in custody," Schatzow said of Porter. "Evidence will show this defendant criminally neglected that duty."

A jury was seated earlier Wednesday in a selection process that was relatively brisk, given defense assertions in pretrial proceedings that it would be impossible to seat an impartial panel. Judge Barry Williams repeatedly denied defense motions to move the trial out of Baltimore.

Williams questioned 150 jurors over two days, mostly out of public view, in an efficient process designed to shield their identities. Some were dismissed, leaving a smaller pool for the final selection of 12 — eight women and four men — and four alternates.

Prospective juror Franz Schneiderman said he was interviewed individually by the judge after he indicated that he had been accused in or the victim of a crime. He told the judge he had some "unfortunate" experiences with Baltimore police, but believed he would be able to render a fair verdict. He was still dismissed.

For several days after Gray died, the demonstrations were mostly peaceful. But on the day he was buried, looting and rioting started, and businesses were burned down. The unrest caused at least $33 million in property damage and police overtime.

A verdict will likely to set the tone for the city. Many fear that an acquittal could prompt more protests and unrest or that a conviction could send shock waves through the city's troubled police department.

Two other officers are black and the three additional officers are white. They will be tried separately beginning in January and lasting through the spring.

Mayor Stephanie Rawlings-Blake was harshly criticized in the wake of the civil unrest and her decision to enact and maintain a city-wide curfew aggravated protesters. In August, she announced that she would not seek re-election.

But no reputations hinge on the trial's outcome as much as state's attorney Marilyn Mosby and her husband, Nick Mosby, a councilman for Baltimore's west side who announced his mayoral candidacy shortly after Rawlings-Blake pulled out.

Marilyn Mosby, who took office in January, announced charges against the officers in May, using language that led defense attorneys to argue that she was so biased she should recuse herself from the case.

She was in the courtroom for opening statements.