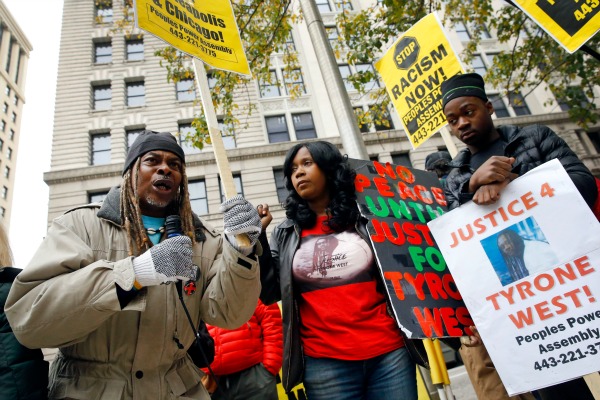 BALTIMORE (AP) — Jury selection for the first police officer to go to trial in Freddie Gray' s death began Monday with a judge questioning potential jurors about their knowledge of the explosive case, which led to widespread protests and rioting and added fuel to the Black Lives Matter movement.

Baltimore Circuit Court Judge Barry Williams conducted initial questioning in a courtroom but planned to interview 66 prospective jurors in a private conference room — an indication of how difficult the selection process could be for the high-profile trial.

William Porter is one of six officers charged in the death of Gray, a 25-year-old black man who died of a severe spinal injury he suffered while in police custody.

Porter, who is also black, is accused of failing to get medical help for Gray during several stops made by the police van that carried Gray on a 45-minute trip. At the end, officers found Gray unresponsive. He was taken to a hospital and died a week later, on April 19.

The officer is being tried first in part because prosecutors want to use him as a witness in the trials of several other officers. He is charged with manslaughter, assault, misconduct in office and reckless endangerment.

The judge asked 75 potential jurors on Monday whether anyone had not heard about the case, the citywide curfew imposed after Gray's death or the settlement paid to his family. No one responded.

Twelve jurors said they had family members in law enforcement. Thirty-seven said they had been a victim or a suspect in a crime, had been to jail or had charges pending against them.

Twenty-six people said they had strong feelings about the charges against Porter.

A small group of protesters gathered outside the courtroom. Their chants of "All night, all day, we will fight for Freddie Gray," could be heard throughout the proceedings.

A verdict is likely to set the tone for the city. If Porter is acquitted, there could be protests and possibly more unrest. A conviction could send shockwaves through the city's troubled police department.

"Everything is at stake. The future of the city is at stake," Police Commissioner Kevin Davis has said.

The judge said he expects the trial to wrap up by Dec. 17.

Two other officers are black and the three additional officers are white. They will be tried separately beginning in January. Their trials are expected to last until the spring.

For several days after Gray died, the demonstrations were mostly peaceful. But on the day he was buried, looting and rioting started, and businesses were burned down. The unrest resulted in millions of dollars in property damage.

The turmoil forced an incumbent mayor to drop out of a re-election campaign and toppled the career of a reform-minded police chief who was unceremoniously fired. The homicide rate soared, and the blood continues to spill on Baltimore's streets at a pace unseen in decades.

Davis stepped in as police chief in July, after a crime spike that saw 45 homicides in a single month.

Gray was initially handcuffed. Later during his van ride, his legs were shackled and he was placed back in the van without a seatbelt, a violation of department policy, prosecutors have said.

Porter told police investigators that arresting Gray "was always a big scene," according to a pretrial filing by defense attorneys. Porter indicated that he knew of a previous arrest in which Gray allegedly tried to kick out windows of a police vehicle.

"You know, so he was always, always, like, banging around," Porter said in the statement excerpted in the filing. "It was always a big scene whenever you attempted to arrest Freddie Gray."

An independent review of the police response revealed "major shortcomings," and painted a portrait of an overwhelmed and under-prepared department that made tactical errors and endangered officers.

Hours before Police Commissioner Anthony Batts was fired in July, the police union issued its own scathing report. Its president called for Batts to "step up."

The U.S. Justice Department is conducting a probe into the department stemming from allegations that officers hassled people and used excessive force.

Republican Gov. Larry Hogan said Monday that Maryland has been preparing for any disturbances related to the trials ever since he called in the National Guard to help restore order in April. He said his administration's security team has been meeting on an almost on a weekly basis.