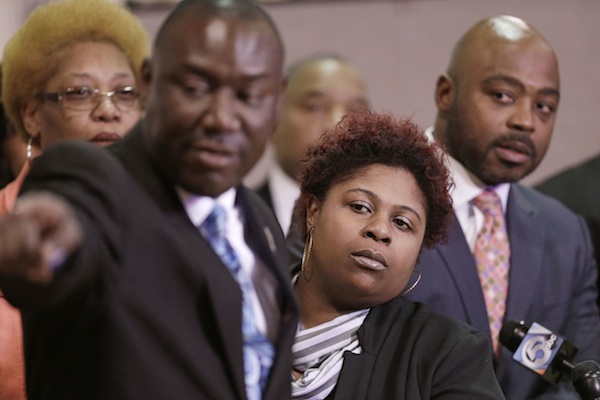 CLEVELAND (AP) — Prosecutors in Ohio on Saturday released a frame-by-frame analysis of the surveillance camera footage first made public a year ago that shows a white Cleveland police officer fatally shooting a black 12-year-old boy who had a pellet gun.

The additional images taken from surveillance video at a recreation center where Tamir Rice was shot and killed don't appear to contain any new or substantive information. The new footage was released in the "spirit of openness," said Cuyahoga County Prosecutor Tim McGinty.

The analysis also doesn't show whether Tamir, as police officials have maintained, was reaching into his waistband for the pellet gun when then-rookie patrolman Timothy Loehmann shot him less than two seconds after getting out of the car.

The enhancement by a video expert will be presented to a grand jury that will decide if Loehmann or his field training officer should be charged criminally for Tamir's death. Loehmann shot Tamir outside Cudell Recreation Center on Nov. 22, 2014.

Saturday's release of the enhancement comes the same day that attorneys for the boy's family asked the prosecutor to allow their use-of-force experts to testify before the grand jury. The request follows the release of reports by use-of-force experts hired by prosecutors that concluded the shooting was justified because the officers had no way of knowing that Tamir's pellet gun wasn't a real firearm.

Loehmann and Frank Garmback were sent to a Cleveland recreation center after a man called 911 to report that a man was waving a gun and pointing it at people. The caller told the dispatcher that the gun might not be real. The call also said the man might be a juvenile, but that information wasn't passed on to the officers.

In a letter to Cuyahoga County Prosecutor Tim McGinty dated Friday, attorneys for the Rice family reiterated their demand that McGinty step aside and allow a special prosecutor to take over the case. The letter called the prosecutor's presentation to the grand jury "biased" and "improper" after the release of three expert reports that called the shooting justified. The grand jury began hearing evidence about the shooting five weeks ago.

The use-of-force experts hired by the Rice family "strenuously disagreed with the conclusions of your so-called experts who concluded the shooting of Tamir Rice was reasonable and justified," the letter said.

A spokesman for McGinty said Saturday that there will be discussions with the Rice family attorneys about allowing their experts to testify before the grand jury.

The family's experts said bad police tactics led to Tamir's death. Roger Carr, a consultant from Santee, California, noted in his report that Loehmann's training officer, patrolman Frank Garmback, should have stopped the cruiser a distance away from Tamir to give the officers time to assess the situation.

"The officers created the alleged danger here," Carr wrote in his report.

Carr criticized the prosecutors' experts for assuming that Loehmann warned Tamir to raise his hands before he shot him, which a Cleveland deputy chief told reporters shortly after the shooting. Investigators from the Cuyahoga County Sheriff's Office noted in a report that there was no evidence Loehmann shouted anything.

Jeffrey Noble, the family's other California-based expert, noted in his report that the "reckless tactical decision" by Garmback and Loehmann to stop so close to the boy "directly led to Tamir's death."