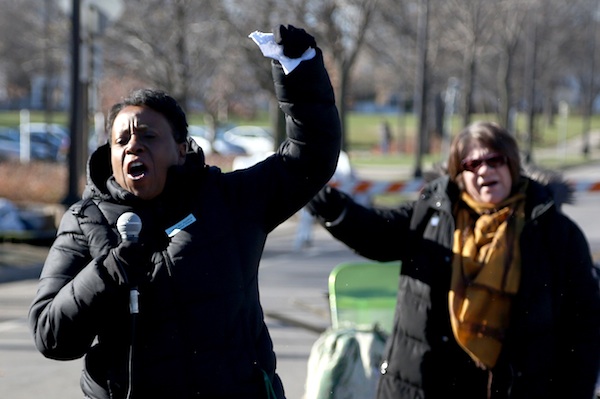 MINNEAPOLIS (AP) — U.S. Justice Department attorneys were expected to fly to Minnesota on Sunday to investigate the killing of a black man that has prompted protests and calls for the two Minneapolis police officers involved in the shooting to be prosecuted.

A key issue during their visit will be whether authorities should release to the public videos of the fatal shooting of 24-year-old Jamar Clark a week ago.
Federal and state authorities have resisted releasing the footage — from an ambulance, mobile police camera, public housing cameras and people's cellphones — because they said it doesn't show the full incident and making the recordings public would compromise their investigations.

Minnesota Gov. Mark Dayton said on Saturday that he had asked Clark's family and representatives of the Black Lives Matter group protesting his death to meet with the federal government lawyers.

"I will urge that the tapes be provided to the family and released to the public, as soon as doing so will not jeopardize the Department of Justice's investigation," Dayton said after meeting with the family and leaders of the protesters.

Federal authorities will be in Minneapolis "for a few days for meetings related to the investigation," Ben Petok, a spokesman for the U.S. Attorney's Office in Minnesota, told the Star Tribune in an email Sunday.

Clark's funeral will start at noon Wednesday and last an hour at Shiloh Temple International Ministries in north Minneapolis, his cousin, Kenya McKnight, said. A visitation will be held at the church before the funeral, from 10 a.m. to noon. Both will be open to the public and news media, McKnight said Sunday.

McKnight added that Clark's family hopes there are no rallies on the day of the funeral. She said the family "does not want it to be political."

Dozens of demonstrators huddled around bonfires early Sunday in frigid temperatures at an encampment outside a Minneapolis police station that they have said will not be dismantled until their demands are met.

Minneapolis civil rights activist Mel Reeves said the primary goal of the protests is to see the officers involved in the death of Clark prosecuted based on statements of people who say they saw the shooting. He said the officers should face charges and "go through the same procedures that we do. We think they're guilty, but let the court decide."

Both officers involved in the shooting, Mark Ringgenberg and Dustin Schwarze, have been placed on standard administrative leave. Authorities haven't said who fired the fatal shot.

Police have said the officers were responding to an assault call and found the 24-year-old Clark interfering with paramedics. Authorities say there was a struggle. The head of the Minneapolis police union has said Clark was shot after reaching for an officer's gun. Protesters have said they don't believe that version of events.

Some people in the community say they saw him handcuffed at the time of the shooting — a claim police have disputed.
Protesters remained at the precinct late Sunday.

Police spokesman John Elder said there had been no arrests or reports of property damage.
___
Associated Press writer Jeff Baenen contributed to this report.