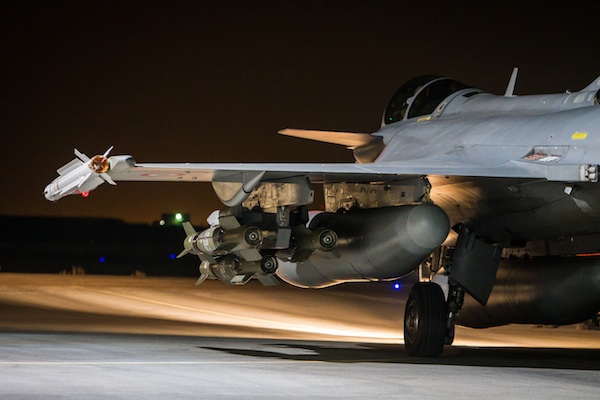 WASHINGTON (AP) — The Pentagon is pressing European and Arab allies to provide more troops and support for the war against the Islamic State group, hoping that the horror of the Paris attacks — and the fear more are coming — will compel them to get more deeply involved.

An attack in Mali killed 27 last week immediately following on attacks in Paris and Beirut. Brussels declared a security lockdown Saturday as the Belgian national crisis centre announced a "severe and immediate threat".

The call for help is driven by a hope to build on what the Obama administration sees as the beginnings of battlefield momentum in Iraq and Syria. It may also reflect a sense in the Pentagon that the campaign against the Islamic State group has advanced too slowly and requires more urgent and decisive military moves.

U.S. officials say they detect more European interest in contributing to the military campaign in Syria, where many governments have stayed largely on the sidelines. But the officials acknowledge that it will be difficult to get more from budget-strapped countries already involved elsewhere in the world. Chances of drawing significant additional help from Arab nations seem even slimmer.

Defense Secretary Ash Carter has made clear the basic U.S. strategy is not changing. But during an hourlong meeting with top advisers and commanders earlier this week, Carter said now is the time to reach out to European allies for support in the fight against the Islamic State group, according to a senior defense official. The official spoke on condition of anonymity to discuss internal Pentagon deliberations.

The official said Carter asked his top advisers - including Joint Chiefs Chairman Gen. Joseph Dunford, Gen. Philip Breedlove, the top U.S. commander for NATO, and Lt. Gen. Sean MacFarland, the lead commander in the Islamic State fight - to reach out to Britain, France, Germany, Italy and Turkey for additional military support. The requests span a range of options from equipment and supplies to trainers and special operations forces.

Italy has provided Tornado fighter jets for reconnaissance missions, weapons for Kurdish fighters and training units in Iraq and has said it would consider playing a more active role in Iraq combating the Islamic State group, but that no decision has been made. Last month, Defense Minister Roberta Pinotti said Italy isn't considering any role in Syria because Damascus hasn't asked for assistance.

"We are ready to help our French brothers, but neither they, nor the Americans nor we will make excursions in Syria," Foreign Minister Paolo Gentiloni said Thursday on RAI state television.

French army Rafale jet on the tarmac of an undisclosed air base as part of France's Operation Chammal launched in September 2015 in support of the US-led coalition against Islamic State group. France launched fresh airstrikes on the Islamic State stronghold of Raqqa in Syria days after attacks in Paris linked to the group killed at least 129 people. French military spokesman Col. Gilles Jaron said the strikes destroyed a command post and training camp and come a day after President Francois Hollande vowed to forge a united coalition capable of defeating the jihadists at home and abroad. (Sebastien Dupont/ECPAD via AP)

The U.S. push for broader support for military action in Syria and Iraq comes as France has intensified its aerial bombing in Syria and Russia has widened its air campaign in Syria after concluding that the Islamic State group was behind the bomb that brought down a Russian passenger jet in Egypt's Sinai Peninsula on Oct. 31, killing 224 people.

French President Francois Hollande is going to Washington and Moscow next week to push for a stronger international coalition against IS.

Carter told an interviewer on Monday that the Paris attacks have had a "galvanizing" effect on U.S. cooperation with France, including in the sharing of intelligence. He noted that the French responded with immediate airstrikes against IS targets and said the United States is looking for new ways to improve the effectiveness of its military campaign.

"We need others to get in the game as well," he told a forum sponsored by The Wall Street Journal. "So I'm hoping that this tragedy has the effect of galvanizing others as it has galvanized the French, and really throughout Europe. Because remember, Europe has been participating in part in operations against ISIL, but not, notably, most of them in Syria so far." Belgium, Britain, Denmark and the Netherlands are flying missions in Iraq but not in Syria.

Derek Chollet, a senior adviser at the German Marshall Fund of the United States who previously served as assistant defense secretary for international security, said the Paris attacks may give other European nations the political will and public support they need.

"There is willingness for Europe to get more involved — but it's a political decision," said Chollet. "I think now that there's political space that's opening because of what happened last week, it makes sense for the U.S. to be perhaps asking some of these tougher questions to European partners about their involvement in places like Syria."

The problem, however, is that resources are tight.

"The challenge we all have is that it's not as though there is this capability that is waiting on the shelf somewhere, that it's just in reserve and if we just could access it would solve all of our problems," said Chollet. "We are bumping up against the limits — under current budgets and current sizes of militaries. You can't manufacture this instantly."

Gen. Joseph Dunford, the new chairman of the Joint Chiefs of Staff, said "there hasn't been a great enthusiasm" for ground combat against the Islamic State group beyond the local forces already fighting in Iraq and Syria, including Kurds in both countries and an Arab rebel coalition in Syria.

"We would like to see particularly Sunni (Arab) nations ... contribute to a greater degree on the ground," he said, citing in particular the predominantly Sunni states in the Persian Gulf region, some of whom have flown combat missions over Iraq and Syria but are not engaged in ground combat.

"I think they would have the credibility and, frankly, come without some of the baggage of Western forces to be on the ground," Dunford told the same Wall Street Journal forum, speaking one day after Carter. "I think there's some possibility of doing that ... that's something we need to work on."

One senior U.S. official described the goal as "pie in the sky," acknowledging it will be difficult to get any of the Sunni nations to agree to send ground troops.

But others suggest that nations such as Saudi Arabia, Qatar and UAE could be tapped for more assistance, including special operations troops and trainers. And in some cases, those Arab nations could provide more help to the Syrian opposition forces by providing both military supplies and support as well and exercising political influence to get the groups better aligned.