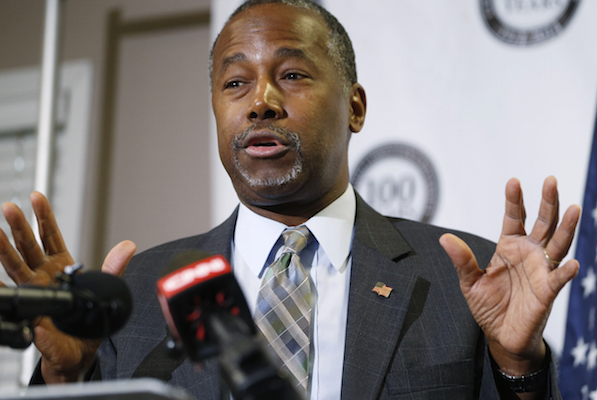 WASHINGTON (AP) — Ben Carson was not offered a formal scholarship to West Point as he wrote in his autobiography, his campaign said Friday, acknowledging the latest in a series of misstatements from the retired neurosurgeon who has surged to the top of the GOP's presidential field.

"I guess it could have been more clarified," Carson said in an interview with Fox News to be broadcast Friday night. "I told it as I understood it."

Carson, a newcomer to national politics, has developed a passionate following based in part on his inspirational personal story and devotion to Christian values. The only African-American in the Republican 2016 class, Carson grew up in inner-city Detroit and often speaks about his brushes with violence and poverty during his early years.

His campaign on Friday sought to clarify a statement about the U.S. Military Academy in his breakout book, "Gifted Hands," in which he outlines his participation with the Reserve Officers' Training Corps, commonly known as ROTC, while in high school.

"I was offered a full scholarship to West Point," Carson wrote in the 1996 book. "I didn't refuse the scholarship outright, but I let them know that a military career wasn't where I saw myself going. As overjoyed as I felt to be offered such a scholarship, I wasn't really tempted."

Carson has repeated the story over the years, including in an interview in October with Charlie Rose.

Campaign spokesman Doug Watts said Carson was "the top ROTC student in the city of Detroit" and "was introduced to folks from West Point by his ROTC supervisors."

"They told him they could help him get an appointment based on his grades and performance in ROTC. He considered it but in the end did not seek admission," Watts said.

Students granted admission to West Point are not awarded scholarships. Instead, they are said to earn appointments to the military academy, which comes with tuition, room and board and expenses paid, in exchange for five years of service in the Army after graduation.

A West Point spokesman on Friday said the academy "cannot confirm whether anyone during that time period was nominated to West Point if they chose not to pursue completion of the application process."

Asked on Fox whether he had lied about his past, Carson said, "Lying, I believe, is a grave sin and there's just no way that I would be sitting here lying about something like this."

The story, first reported on Friday by Politico, concerns the latest Carson statement that has been challenged for accuracy.

During last month's presidential debate, Carson said it was "absolutely absurd" to say he had a formal relationship with the company Mannatech. But Carson is featured in the company's videos, including one from last year in which he credits Mannatech's glyconutritional supplements with helping people restore a healthy diet.

On Wednesday, Carson wrote on his Facebook page that "every signer of the Declaration of Independence had no elected office experience." But about half had experience as elected members of colonial assemblies, and Watts admitted the error to The Washington Post.

Also this week, a CNN report raised questions about the accuracy of Carson's oft-repeated claim that he tried to stab a close friend as a teenager. Citing privacy concerns, the Carson campaign has refused to name the person involved, but Watts said Friday that he knows "exactly who the person is. And I know the person is alive and well."

Carson also came under scrutiny this week for standing by his assertion that Egypt's great pyramids were built by the biblical figure Joseph to store grain. "I happen to believe a lot of things that you might not believe because I believe in the Bible," Carson said Thursday.

The idea was dismissed by his church, and experts said it is accepted science the pyramids were tombs for pharaohs.

Republican rival Donald Trump, now looking up at Carson in some recent preference polls, seized on Carson's troubles in a series of tweets on Friday.

"With Ben Carson wanting to hit his mother on head with a hammer, stab a friend and Pyramids built for grain storage - don't people get it?" Trump tweeted.

To date, Carson's rhetoric and penchant for using extreme examples to prove his points, such as equating abortion with slavery, have not curbed his rise in preference polls and among small-dollar Republican donors. His supporters have cheered his willingness to ignore what he calls political correctness, and have been more willing to blame the media.

"Nobody ever said that taking on the establishment would be easy," Watts said Friday. "We expected these kinds of personal attacks and distortions of his record, his background and his accomplishments. We're very confident that his personal background and history and integrity will remain intact."