Obama to Call For Breaking Cycle Of Incarceration, 'Ban The Box' 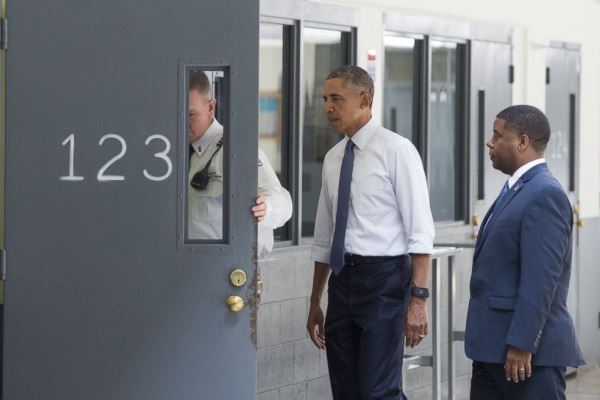 WASHINGTON (AP) — More than half a million people leave U.S. prisons each year, but with jobs, housing and mental health services scarce, many are soon back behind bars. On Monday, President Barack Obama will call for breaking that cycle of incarceration by helping former inmates successfully re-enter society.

With his visit to a drug treatment center in Newark, New Jersey, Obama aims to boost his ongoing push for overhauling the criminal justice system. In rare bipartisan fashion, Congress is considering legislation cutting sentences for nonviolent drug offenders, but Obama will seek to force attention to the plight offenders face once they're finally set free.

"Everyone has a role to play, from businesses that are hiring ex-offenders to philanthropies that are supporting education and training programs," Obama said in his weekly address.

Without new laws, Obama is limited in what he can to do. For example, Obama has asked Congress to "ban the box" — shorthand for prohibiting the government and its contractors for asking job applicants about criminal histories on applications. It's an issue resonating in the Democratic presidential primary, with Hillary Rodham Clinton, Bernie Sanders and Martin O'Malley all supporting steps to help those convicted of crimes find employment.

Using his own authority where possible, Obama will announce he's asking the government personnel office to wait until later in the hiring process to ask about criminal histories — a step most federal agencies have already taken, the White House said. The Obama administration will also clarify its "one strike" rule that prevents many people with arrest records from living in public housing.

At Integrity House, a state-funded drug and residential treatment center, Obama was to be joined by Sen. Cory Booker, D-N.J., and Newark Mayor Ras Baraka. Obama also planned to host a roundtable and deliver a statement at Rutgers University's law school.

Aiming to seize some of Obama's limelight, New Jersey Gov. Chris Christie planned his own events Monday on community policing and criminal justice in Camden.