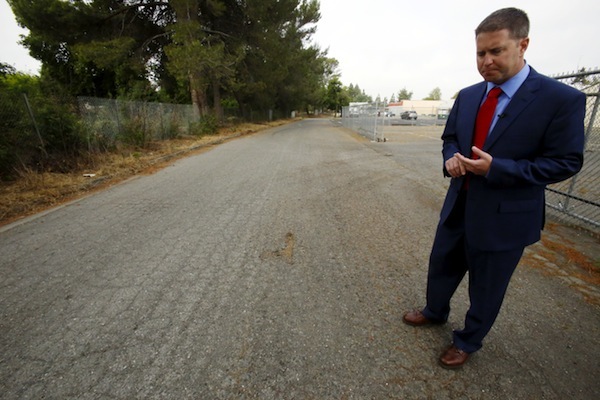 WEST SACRAMENTO, Calif. (AP) — As darkness falls, the most tattered section of this town's main drag feels more desperate with each passing hour. Under the cover of night, a slow but steady flow of wandering souls emerges — addicts, prostitutes, drifters. Sergio Alvarez knew the pickings were easy.

As a rookie officer on the West Sacramento police force, Alvarez was assigned to the overnight shift on a beat that included West Capitol Avenue. He volunteered to stay on late-night duty and, over his nearly six years on the job, he gained seniority and almost always patrolled alone. With the solitude came opportunity.

"That's where Alvarez falls through the cracks," said Sacramento attorney Justin Gingery, whose firm represented four of eight women who said they were sexually assaulted by the officer, many in a dark alley near "West Cap." Convicted last year of kidnapping five of those women and either raping them or forcing them to perform oral sex, Alvarez is now serving 205 years to life in prison.

Alvarez is a poster child of a predator cop — and of the flaws in policies, technological glitches, and culture of policing that can allow such behavior to go unnoticed or unpunished until it's too late. His case prompted civil lawsuits over police procedures, with a total of $4.1 million to be paid to six victims who sued, and left a new chief taking a hard look at the way the department does business.

"It hurts the heart to see victims. But it makes it even worse when you are, in one way, shape or form, a contributing factor to them being hurt," said Tom McDonald, a former captain for the Los Angeles Police Department who took over in West Sacramento after Alvarez's arrest.

A yearlong Associated Press investigation illuminated the problem of rape and sexual misconduct committed by law officers in the United States, uncovering about 1,000 cops, jail guards, deputies and others who lost their licenses from 2009 through 2014 for such incidents. There are most certainly even more than that, because some states did not provide records and others, including New York and California, said they do not decertify officers for misconduct.

The International Association of Chiefs of Police spotlighted the problem of sex abuse by officers in a 2011 report that said certain conditions of the job may help create opportunities for officers to take advantage of victims — having authority over others, patrolling alone and late at night, and engaging with vulnerable citizens.

Those issues were hallmarks of the Alvarez case and many others, along with critical breakdowns in policies and procedures. Those include a lack of supervision and training fueled by budget cuts; misuse or malfunction of electronic systems meant to monitor officers; warning signs about potential misconduct that went overlooked; and a good old boy culture in which inappropriate behavior was ignored or even condoned.

A lack of supervision was a major finding in a March Department of Justice report about the San Diego Police Department, which has been hit with several sex misconduct incidents in recent years, including the case of Anthony Arevalos, an officer convicted in 2011 following accusations that he attacked 13 women.

Justice Department investigators found that budget cuts had hit that department hard, with staffing reductions a "key problem." Nearly a quarter of sergeant positions — considered first-line supervisors — had been filled with acting sergeants who lacked the training and authority of their predecessors.
Sergeants also were not always working the same shifts as the people they supervised, and sometimes saw subordinates only once a week.

Shelley Zimmerman, who took over last year as chief in San Diego, is now, among other things, requiring patrol officers to wear body cameras to bolster accountability. Zimmerman also reinstated an internal misconduct investigative unit, and requires that more than one officer be present when any women are transported.

Police officials often say that the first line of defense in stopping any bad cop is the screening and hiring process. But in the Alvarez case, Gingery said his own investigation on behalf of his clients found nothing about Alvarez's life before he joined the West Sacramento force that might have foreshadowed the trouble to come.

Alvarez was a hometown boy who graduated from the local high school, got married and worked at a grocery store before being accepted into the police academy. A few years later, Alvarez's wife, Rachel, began to fear him, she said in a letter read at his criminal trial. By 2012, she wrote, "Sergio became a stranger to me."

That was the same year he found many of his victims, using the power of the badge and any leverage he had — pending warrants, drug possession — to get what he wanted. One victim was an alcoholic, often seen on the streets collecting bottles and scrap metal for money.

"I remember when I was done, I stood up and I glanced straight at his name tag, and he said, 'Now everything Mr. Alvarez does is a secret,'" she testified at trial, recalling the first of four sexual incidents with the man she called a "creepy cop."

The criminal case uncovered several previous red flags: The GPS unit in Alvarez's squad car was not working, which meant that no one could track or verify his location. He also routinely ignored an order to use the audio-visual recording unit inside his patrol car. The device captures what happens during traffic stops, recording the scene in front of a patrol car and also the back seat — where, in Alvarez's case, investigators eventually found seminal fluid matching him and the vaginal fluid and DNA of one victim.

McDonald, the new West Sacramento chief, has implemented changes. He's instructed sergeants to be more involved in direct supervision of street cops, and requires a supervising officer on all shifts, including the overnight. He is mandating that his officers use their audio-visual units and that cars get regularly serviced to ensure the units and GPS systems work. And the city has applied for a grant to purchase body cameras.

McDonald said the changes were not a specific response to the Alvarez case but rather part of an attempt to create an atmosphere in which officers quickly report any signs of misconduct.

"They need to understand that it's an expectation that if they see something that's inappropriate, they need to stand up."
___
Martha Irvine, an AP national writer, can be reached at [email protected] or at http://twitter.com/irvineap . Scott Smith is the AP's correspondent in Fresno, California.