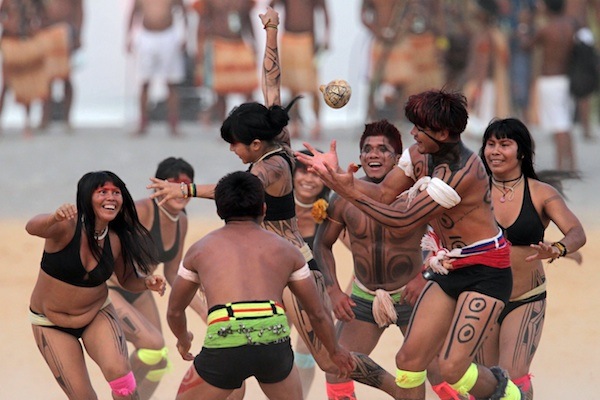 PALMAS, Brazil (AP) — Forget New York, Milan or even Paris: With nearly 2,000 native people from around the world rocking their finest traditional garb at the World Indigenous Games, there's not a catwalk in the world that can compete with this dusty agricultural outpost.

Awash in a riot of tropical feathers, draped in endless stands of eye-popping beads and topped off by headdresses that look like they deserve their own zip codes, host city Palmas has earned itself the title of world fashion capital — at least for the nine-days of the event.

The venue is bubbling with so many bold, audacious looks that the visitor doesn't know where to look next. Eyes dart from the Bolivian women in their bowler hats, to dancers from Canada in buttery suede dresses hung with jangling metal ornaments, and come to rest finally on the Amazon-dwelling Kamayura men whose headdresses look like giant spider webs made out of feathers.

The "head roach" proudly sported by Canadian delegate Lamarr Oksasikewiyin was another architectural feat. The towering Mohawk is made from a dear tail, the feathers of a teenage eagle and ethically extracted porcupine hair — plucked, he assured, from a live animal which wanders away after the process, dignity bruised but body intact.

"Normally it stands up really straight," said Oksasikewiyin, a 46-year-old schoolteacher of the Nehiyaw people of Saskatchewan. "But it's so humid here, it's really quite droopy." 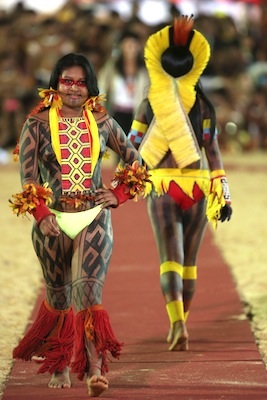 PHOTO:A Brazilian from the Paresi ethnic group , left, parades next to one from Kayapo ethnic group during a parade of indigenous beauty at World Indigenous Games, in Palmas, Brazil, Saturday, Oct. 24, 2015. Rail-thin or thick-waisted, swathed in scarfs and ankle-length skirts or wearing only a thong bikini bottom and bodypaint, they incarnated the canons of beauty of first peoples from across Brazil and as far afield as Panama and French Guyana. (AP Photo/Eraldo Peres)

It's not just the event's indigenous participants who are getting in on the sartorial action.

Non-indigenous spectators, most of them residents of sleepy Palmas, lined up to get temporary tattoos like the head-to-toe designs many Brazilian indigenous people use. Made with inky dye extracted from the jenipapo fruit, the tattoos were applied with little twigs for $1.25-$2.50 a pop.

While most people were content to small designs on their triceps or calves, a bold few took the plunge, stripping down to their underwear to get whole-body paint jobs or even intricate webs all over their faces.

"It only lasts maximum one week," Rivaldo Warinmytygi, of Brazil's Tapirape people, reassured one would-be customer. "But it goes away even faster if you're taking three baths a day." Which, with temperatures exceeding 45 degrees Celsius (113 degrees Fahrenheit) during the first few days of the Games, you just might.

Headdresses have proven another popular product among the indigenous vendors hawking everything from so-called "nose whistles" — little wooden contraptions that fit over nose and mouth to emit convincing bird calls — to an almost life-sized broad-snouted caiman made from an artfully burned tree trunk. Among the local teenage girls, headdresses made out of macaw feathers were the must-have accessory. 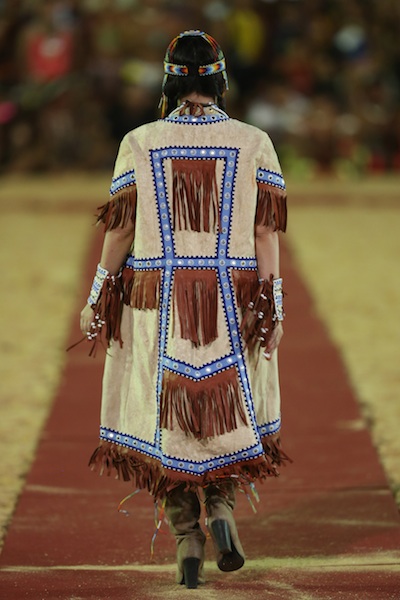 Inspectors from Brazil's wildlife protection agency were at the games, handing out pamphlets in an attempt to combat the practice of killing as many as eight birds to make a single headdress.

While Brazilian law allows indigenous people to use clothing and accessories made from wild animal parts, they're forbidden from selling them. Still, the threat of fines up to $1,250 and possible jail time for the buyer appeared to do little to dampen the enthusiasm for feather headdresses.

For indigenous Brazilian Yara Brasil, who was sporting a fringed suede jacket from Canada and Australian crocodile boots and a Davy Crockett hat of her own confection, the games were a chance to expand her eclectic collection of native clothing from around the world.

"I'm a walking cultural exchange," she said, showing off the profusion of new jewel-colored beads she'd been given.