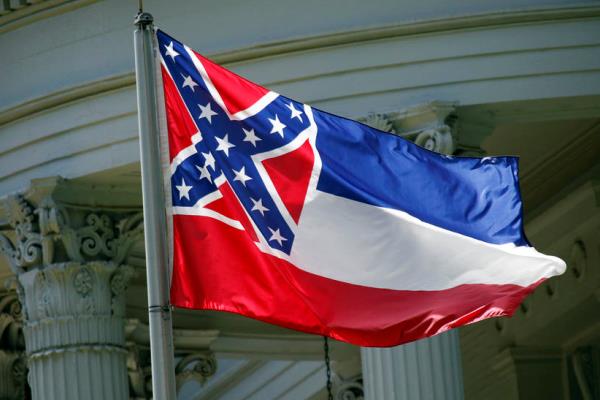 JACKSON, Miss. (AP) — The University of Mississippi quietly removed the state flag with its Confederate battle emblem from its place of honor on campus Monday morning after students and faculty called it a divisive symbol that undermines efforts to promote diversity, tolerance and respect.

Interim Chancellor Morris Stocks waited until after the brief ceremony was over to announce that he had ordered the flag lowered and sent to the university's archives.

The action came days after the student senate, the faculty senate and other groups adopted a student-led resolution calling for removal of the banner from the Oxford campus, a bastion for Southern elites since its founding in 1848.

"As Mississippi's flagship university, we have a deep love and respect for our state," Stocks said in a statement Monday. "Because the flag remains Mississippi's official banner, this was a hard decision. I understand the flag represents tradition and honor to some. But to others, the flag means that some members of the Ole Miss family are not welcomed or valued."

Without fanfare and with no advance public notice, university police officers removed the banner early Monday from a flagpole that stands among oak trees in the Lyceum circle, between the white-columned main administration building and a marble statue of a saluting Confederate soldier. It's the same area where deadly white riots broke out in 1962, when James Meredith was enrolled as the first black student at Ole Miss, under a federal court order and with protection from a phalanx of U.S. marshals.

Today's students forced this issue at the height of Mississippi's campaign season, as the governor and most state lawmakers seek re-election on Nov. 3, and many of these politicians have been loath to stake their own positions.

The speaker of the House has called for change, but his fellow Republican, Gov. Phil Bryant, declined to call a special legislative session to debate it, saying Mississippians themselves should to decide the flag's future.

An integrated group of more than 200 people joined a remove-the-flag rally Oct. 16 on the Oxford campus, sponsored by the university chapter of the NAACP.

"I think college students react a lot emotionally," the governor said after the student senate vote, and he held his ground after the flag was pulled down.

"Mississippians overwhelmingly voted in 2001 to adopt the current Mississippi state flag. I believe publicly funded institutions should respect the law as it is written today. It clearly states 'The state flag shall receive all the respect and ceremonious etiquette given the American flag,'" Bryant said in a statement.

Since 1894, the Mississippi flag has had the Confederate battle emblem in the upper left corner — a blue X with 13 white stars, over a field of red. Residents chose to keep the flag during a 2001 statewide vote.

However, complaints that the battle flag is more about promoting white dominance than preserving Southern heritage have been rising nationwide since the June massacre of nine black worshippers at a church in Charleston, South Carolina. Police called it a racially motivated attack by a white man who had posed with Confederate flags.

The University of Mississippi has struggled with Old South symbolism for decades. Sports teams are still called the Rebels, but the university several years ago retired the Colonel Rebel mascot — a white-haired old man some thought resembled a plantation owner. The university also banned sticks in the football stadium nearly 20 years ago, which eliminated most Confederate battle flags that fans carried.

"The University of Mississippi community came to the realization years ago that the Confederate battle flag did not represent many of our core values, such as civility and respect for others," Stocks said in the statement Monday. "Since that time, we have become a stronger and better university. We join other leaders in our state who are calling for a change in the state flag."