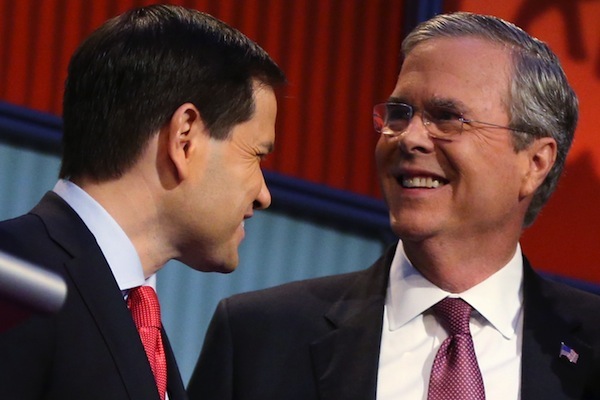 WASHINGTON (AP) — For months, Jeb Bush's campaign insisted it was too early.

Too early to worry about the Republican presidential candidate's sluggish poll numbers. Too early to fret over the rise of unorthodox candidates Donald Trump and Ben Carson. Too early to question if the one-time front-runner is merely a pedestrian candidate.

But with just over three months until primary voting gets underway in Iowa, and Bush still mired in the middle of the crowded GOP field, some supporters fear it could soon be too late.

"The moment is now," said New Hampshire State Rep. Carlos Gonzalez, reflecting the sense of urgency among nearly two dozen Bush supporters interviewed this past week by The Associated Press.

On Friday, Bush signaled to supporters he understood the need to make a change. Faced with slower-than-expected fundraising, the campaign announced sweeping spending cuts, including a 40 percent payroll reduction, that will deplete staff at its Miami headquarters and refocus resources in Iowa, New Hampshire, South Carolina and Nevada — the first four states to hold nominating contests.

"It means I have the ability to adapt," Bush said of the changes. "The circumstances when we started the election were different."

But interviews with supporters in early states reveal concerns that extend far beyond the campaign's allocation of resources. There are fears Bush is failing to distinguish himself from his rivals, despite a month of aggressive television advertising. Many said they were eager to see Bush be more assertive and forceful in debates, in his TV ads and at campaign appearances.

They worry he may not be capable of doing so.

"God gives us our personalities and our looks and we can't help that," said Robert Rowe, another New Hampshire state representative who is switching his allegiance from Bush to Ohio Gov. John Kasich. "We are who we are."

Said Bush supporter Steven Zumbach, an attorney from Des Moines, Iowa: "He's going to need to take some risk. Unless he does something like that, it's going to be difficult."

Bush campaign aides say they understand the anxiety, but blame it on an unusual political season that has diverted attention away from more traditional candidates — not a sign of weakness in the former Florida governor. Bush himself has urged voters to stay patient, reminding them that candidates who sit at the top of polls at this stage in the race often fade.

"Four years ago Herman Cain was the front-runner. Two weeks prior to that it was Rick Perry," Bush said Wednesday during a campaign stop in Nevada. "Both are great guys, but they didn't win the nomination."

Indeed, many voters in Iowa and New Hampshire wait until just before their states' contests to settle on a candidate. The outcomes in those first two states have ripple effects in South Carolina, Nevada and other states that quickly follow.

There are also signs of volatility in the GOP contest. After spending the summer and fall atop the Republican field, Trump appears to be losing ground in Iowa to Carson, an untested politician with a penchant for provocative comments about Muslims and the Holocaust.

Bush is still among the candidates viewed as most electable among Republican voters, according to a new Associated Press-GfK poll. Six in 10 registered Republicans say he could possibly win a general election — putting him just below Trump and about tied with Carson atop the field.

Most of those interviewed by the AP said they remain loyal to Bush. Even as his campaign fundraising slows, they see his heavily funded super PAC as an advantage that could help him outlast his rivals. They believe his methodical approach to issues and record as Florida governor make him the most qualified Republican to be president.

But they wonder if there's room for a candidate like Bush in a race where voters seem eager to voice their displeasure with Washington and anyone with a history in politics.

"Within about a month, he's going to need to step forth," said Barbara Smeltzer, a longtime GOP activist from Dubuque, Iowa. "He's going to have to start to show some muscle."

Added Carroll Duncan, a councilwoman in Dorchester County, South Carolina, "My main concern is that his message is not getting out there. That's up to his campaign to turn that around."

Bush aides say they've been trying to do just that, with both the campaign and Right to Rise super PAC blanketing the airwaves with advertisements. Right to Rise accounted for one of every two 2016 presidential ads last week, according to information collected by Kantar Media's CMAG advertising tracker.

Right to Rise began its media blitz the week of Sept. 15 with a $1.3 million buy in New Hampshire and Iowa, expanding to South Carolina the following week. The super PAC has spent about $2 million each week on ads, CMAG shows. The group's media plans continue through mid-February — by which time it will have spent $42 million if it follows through on all of its airtime reservations.

Bush's campaign is trying to supplement the ad spending with a large footprint on the ground in early states. The campaign has 12 paid staffers in New Hampshire, 10 in Iowa, eight in Nevada and seven in South Carolina.

The overhaul the campaign announced Friday aims to boost those numbers. Supporters hope the changes will be enough to keep Bush afloat through a long, and so far surprising, campaign.

"Jeb is not spectacular," said Lynn Stewart, a state assemblyman from Henderson, Nevada. "But he's solid and steady."