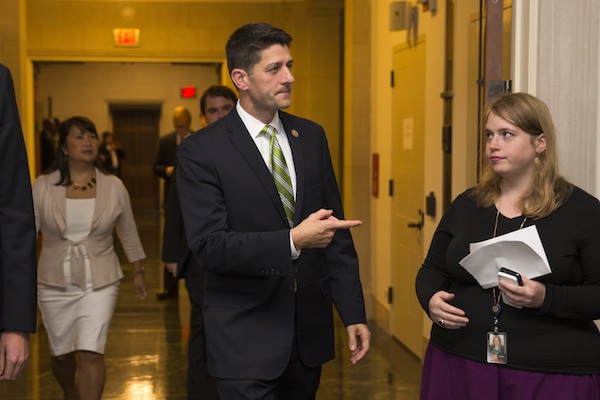 WASHINGTON (AP) — Rep. Paul Ryan wrung pledges of support from every major faction of the divided House GOP on Thursday, an achievement that all but guarantees he will become the next speaker of the House, second in line to the presidency.

The mainstream conservative Republican Study Committee and the centrist Tuesday Group both gave Ryan their blessing as expected during the day. That followed critical backing Wednesday night from the hard-line House Freedom Caucus, whose support was not assured given its rebellious members were responsible for forcing the current speaker to the exits and cowing his most likely successor.

In announcing his potential candidacy for the speaker's job earlier this week, Ryan had said he wanted endorsements from all three groups to guarantee he would emerge as a unity candidate for House Republicans — not risk becoming the latest victim of the intraparty unrest roiling Capitol Hill and the presidential campaign. The Freedom Caucus's support fell short of a formal endorsement, since that would have required 80 percent agreement that the group was not able to achieve, but Ryan accepted it as a show of unity.

Now, the 45-year-old onetime GOP vice presidential nominee seems certain to formalize his bid for the job, and triumph easily in elections set for next week. It would put the Wisconsin lawmaker in a role he never wanted and did not intend to seek, but could offer the fratricidal House GOP a chance to chart a new course after years of chaos, and allow Republicans to refocus away from fighting each other and onto the race for the White House.

"Paul's a uniquely capable communicator and it will be an asset for us to have his ability to frame the issues that we all care about," said GOP Rep. Patrick Meehan of Pennsylvania. Ryan's leadership will "support really what will be an agenda going into the 2016 campaign season," Meehan said.

Ryan had sought the speakership only when a dangerous leadership void emerged in the House after Speaker John Boehner announced plans to resign under conservative pressure, and Majority Leader Kevin McCarthy abruptly withdrew from the race to replace him. Although a dozen or so other lawmakers were also exploring the race, most Republicans viewed Ryan as the only figure capable of uniting warring factions in the GOP.

Ryan initially demurred but relented under heavy pressure from GOP leaders — with conditions. He sought united support and enough flexibility to spend time with his wife and kids in Wisconsin. He also sought to change a House rule allowing an individual lawmaker to force a vote on ousting the speaker at any time, the arcane procedure conservatives were threatening against Boehner before he resigned.

That last point seemed to remain unresolved, since the Freedom Caucus specified that its support for Ryan didn't extend to the rules changes he sought. Indeed members of the group suggested that their support for Ryan was just as conditional as his planned candidacy had been, and they could turn on him if he takes the House in a direction they don't want to go.

"We can support him and we want him to be successful, but we want to make sure also that he understands that this is not about crowning a king," said Rep. Raul Labrador of Idaho. "This is about working together and making sure that every member feels like they're empowered."

An early test may be the need to raise the federal government's borrowing limit by Nov. 3 or face unprecedented default. Most Republicans will not vote to raise the debt limit without concessions that the White House has already ruled out.

Another deadline looms in early December, on whether to pass spending legislation or risk a government shutdown.

Both instances might be cases where Republican leaders would have to rely largely on Democratic votes to achieve their goals, a practice strongly opposed by the Freedom Caucus and which they want to see Ryan avoid.