Ruling Could Ease Way for Unions at Fast-Food Chains 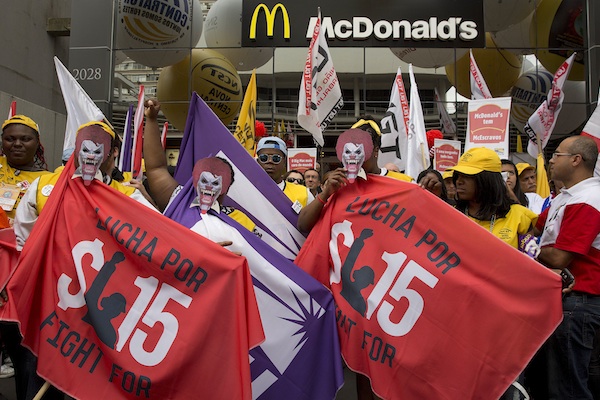 NEW YORK (AP) — It could be easier for unions to bargain for better pay and working conditions on behalf of millions of workers at McDonald's, Burger King and other fast-food chains after a National Labor Relations Board ruling on Thursday.

The ruling, which came from a case involving a waste management company and its staffing company, refines the board's standard for determining when parties can be identified as employers.

The decision could have broader implications for unions that have struggled to organize workers at fast-food restaurants, which are often run by franchisees who consider themselves small business owners, but pay fees and adhere to standards set by companies like Wendy's and Yum Brands, which owns KFC, Pizza Hut and Taco Bell.

Those companies have said they do not have control over decisions about hiring, firing or pay at locations run by franchisees. That has made it difficult for unions to organize workers across an entire restaurant chain, since they would have to deal with a patchwork of hundreds or thousands of franchisees.

But the labor relations board's ruling could make it easier for unions to bargain with corporations like McDonald's on behalf of workers instead. In its decision, the National Labor Relations Board said Browning-Ferris Industries is a joint employer along with Leadpoint Business Services, a staffing agency that supplied it with workers.

In evaluating whether a party would qualify as a joint employer, the board said Thursday that it will consider factors such as whether the party exercised control over the terms of employment "indirectly through an intermediary, or whether it has reserved the authority to do so." Previously, parties had to have exercised "direct operational and supervisory control" over an employee to be considered joint employers.

"This unnecessary change to decades-old law is legally wrong and disappointing, and could have an unwarranted impact on existing business relationships across many industries," the company said in a statement.

VIDEO: New York is looking at a $15 minimum wage

The International Franchise Association, which represents franchisors such as McDonald's Corp., also opposed the ruling.

The Service Employees International Union also is leading cases before the labor relations board, alleging labor violations at multiple McDonald's locations around the country. In those charges, which have not yet been heard, McDonald's Corp. is named as a joint employer.

Labor groups have argued that McDonald's and others should be considered joint employers along with franchisees, since they exert so much control over how franchisees run their businesses.

In its ruling Thursday, the National Labor Relations Board noted that there were more than 2.8 million workers in the U.S. who were employed through temporary agencies last summer, and that its previous joint employer standard has "failed to keep pace with changes in the workplace and economic circumstances."

The Teamsters Union said the board's decision would help protect millions of workers by holding employers that rely on temporary or contracted workers accountable.

"Today's decision is another step to show that companies can no longer claim they are not employers when problems arise," the Teamsters said in its statement.