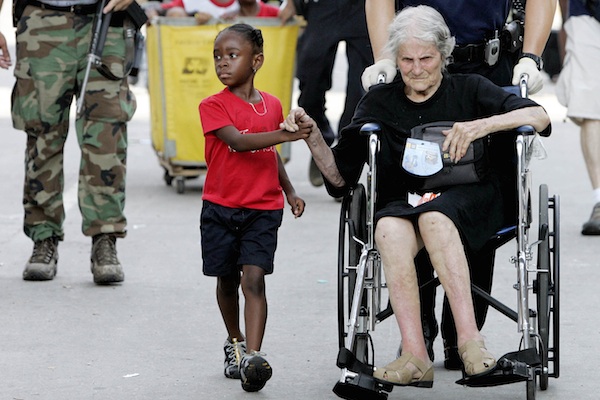 NEW ORLEANS (AP) — With prayer and the somber ringing of church bells and the uplifting sounds of brass bands and music, residents across Mississippi and Louisiana Saturday will pay homage to those who died in Hurricane Katrina, thank those who came to rebuild and celebrate how far the region has come from that devastating day when the hurricane struck.

Ten years ago today Katrina made landfall, in what turned into one of the deadliest storms in American history. The hurricane's force and flooding ultimately caused more than 1,800 deaths and roughly $151 billion in damage across the region. In New Orleans, wide scale failures of the levee system protecting the city left 80 percent of New Orleans under water.

In Mississippi, churches will ring their bells to remember when the storm made landfall. In Biloxi, clergy and community leaders were to gather at MGM Park for a memorial to Katrina's victims and later that evening the park will host a concert celebrating the recovery.

Glitzy casinos and condominium towers have been rebuilt. But overgrown lots and empty slabs speak to the slow recovery in some communities.

In New Orleans officials will lay wreaths at the hurricane memorial and at the levee that ruptured in the Lower 9th Ward.

The neighborhood was one of the bastions of black homeownership in America when water burst through floodwalls on one side, pushing houses passed down through generations off foundations and trapped residents on rooftops pleading for help from passing helicopters.

The neighborhood still has some of the lowest rates of people who've returned after the storm, but they will be having a daylong celebration to mark the progress they have made.

Across the city volunteers will also spread out in a day of service working on various projects.

Other neighborhoods such as Broadmoor and Lakeview — both recognized as post-Katrina comeback stories — will also be holding events Saturday.

In the evening, former President Bill Clinton will headline a free concert-prayer service-celebration at the city's Smoothie King Center. In addition to the former president the event will feature performances by the city's "Rebirth Brass Band," award-winning journalist Soledad O'Brien and Chief Monk Boudreaux and the Wild Magnolias.

The city has framed the 10th anniversary as a showcase designed to demonstrate to the world how far the city has come. In a series of events in the week leading up to the actual anniversary, the city has held lectures, given tours of the levee improvements and released a resiliency plan.

Many parts of this iconic city have rebounded phenomenally while many residents — particularly in the city's black community — still struggle.