Autopsy: Suspect Killed by St. Louis Police Was Shot in Back 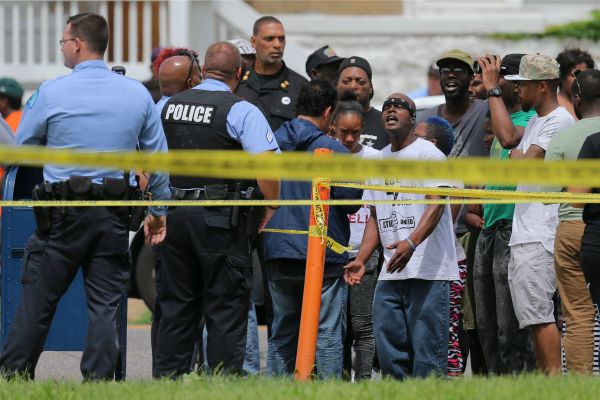 ST. LOUIS (AP) — An autopsy showed that an 18-year-old who was shot and killed by an officer helping serve a search warrant in a violence-plagued neighborhood died from a single wound in the back, police said Friday.

St. Louis Police Chief Sam Dotson cautioned that the location of Mansur Ball-Bey's wound neither confirms nor disproves two officers' accounts that Ball-Bey pointed a gun at them before they shot at him Wednesday. Dotson said Thursday that a stolen handgun linked to Ball-Bey — with one round in the chamber and 13 more in the magazine — was found at the scene.

"Just because he was shot in the back doesn't mean he was running away," Dotson told the St. Louis Post-Dispatch. "What I do know is that two officers were involved and fired shots, but I don't know exactly where they were standing yet and I won't know until I get their statements."

Authorities haven't said exactly where in the back Ball-Bay was shot. Police haven't released the full autopsy or toxicology tests yet, and have not explained why they don't yet have statements from the officers.

Dotson, unreachable Friday by The Associated Press, has pledged a thorough internal investigation by the police's year-old Force Investigation Unit. Without specifying how long that "transparent" inquiry may take, police said Friday its findings will be forwarded to St. Louis city and federal prosecutors for review.

"We have a policy that's strong, a process that's strong," he told the AP. "There's strong third-party review, and we want to make everything above reproach."

Messages left with the Ball-Bay family's attorney, Jermaine Wooten, were not immediately returned. Wooten has insisted to media outlets that Ball-Bay was not armed when he was shot.

The law gives police officers latitude to use deadly force when they feel physically endangered. The Supreme Court held in a 1989 case that the appropriateness of use of force by officers "must be judged from the perspective of a reasonable officer on the scene," rather than evaluated through 20/20 hindsight.

That standard is designed to take into account that police officers frequently must make split-second decisions during fast-evolving confrontations and should not be subject to overly harsh second-guessing. The Justice Department cited that legal threshold earlier this year when it cleared officer Darren Wilson in the fatal shooting of 18-year-old Michael Brown in the St. Louis suburb of Ferguson.

Officers have been cleared in cases in which suspects were shot in the back, including the St. Louis killing nearly a year ago of black 18-year-old VonDerrit Myers Jr. by Jason Flanery, a white, off-duty officer.

Authorities have said that Flanery was patrolling a neighborhood as a security officer in a marked private security car when he confronted Myers, who while atop a hill began shooting downward at Flanery. Flanery returned fire as Myers fled.

Dotson's department internally investigated the matter and turned it over to St. Louis' prosecutor, Jennifer Joyce, who in May announced that her office's "independent and exhaustive investigation" concluded Flanery acted in self-defense.

Joyce said an autopsy showed Myers was shot eight times, with six of the entrance wounds on the back of Myers' legs. All of those wounds had an upward track, consistent with Flanery's account that he was downhill from Myers when he was shooting.

An attorney for Myers' family has insisted that Myers was unarmed and that Flanery planted the gun near Myers' body.