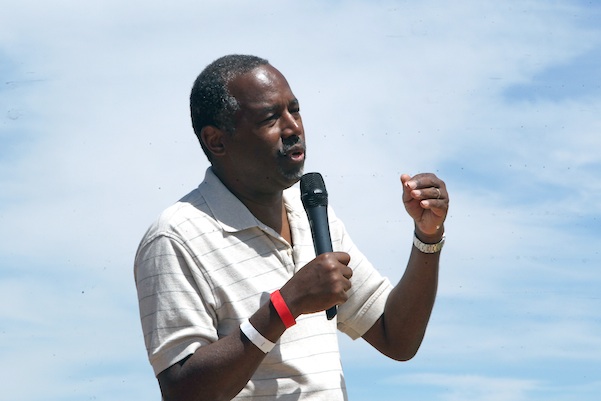 GARDNERVILLE, Nev. (AP) — Four Republican presidential candidates rallied hundreds of voters at a Basque-themed barbecue in Nevada on Saturday, a sign the state is coming into its own as a relatively new hotspot for campaigns.

Candidates donned cowboy boots and jeans and tweaked their campaign pitches to the rural Nevada audience. Fiorina referenced one of the menu items — a Basque stew featuring "lamb fries," or lamb testicles — in a riff about sexism against female candidates.

Cruz alluded to Republican Nevada Gov. Brian Sandoval's successful push to raise taxes in the state when he panned "campaign conservatism" and vowed to carry through an uncompromising agenda if elected.

The speakers also urged more local control of public lands and natural resources. It's a hot-button issue in Nevada, where the federal government manages more than 80 percent of the land and where rancher Cliven Bundy was involved in a high-profile showdown with federal officials last year over grazing rights.

"It was exactly the event we could've dreamed of," said Nevada Attorney General Adam Laxalt, a Republican who modeled the barbecue after events his Basque grandfather, former Sen. Paul Laxalt, held in Washington.

Nevada has become a popular stop for presidential candidates after moving up in the nominating order in 2008. The state's caucuses come after primaries and caucuses in Iowa, New Hampshire and South Carolina, making Nevada a target for candidates hoping to score the first win in a Western state.

A swing state, Nevada went for Barack Obama in the past two presidential cycles but swept Republicans into all key state elected posts in 2014. It counts fewer than 3 million people.

"Anyone who spends time here has a great shot at winning this state," Laxalt said. "I believe this state is absolutely wide open right now."

About half of the Republican field has started building a staff in Nevada, according to political consultant and Cruz adviser Robert Uithoven. Jeb Bush has the most established team, including chairmen in all 17 Nevada counties.