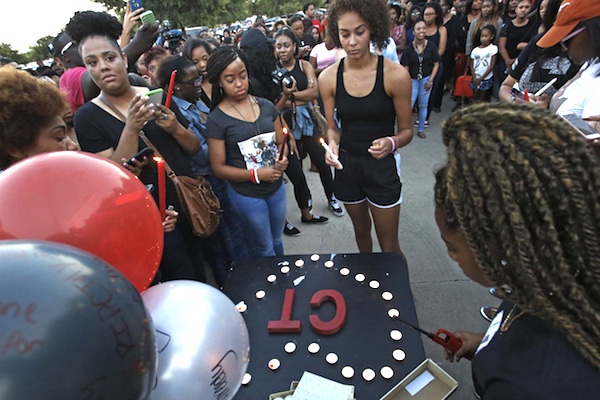 ARLINGTON, Texas (AP) — The FBI has been asked to help investigate the death of a Texas college football player who was fatally shot by an officer during a burglary call at a car dealership, a suburban Dallas police chief said Saturday.

During a news conference Saturday night, Arlington Police Chief Will Johnson said he had spoken to the FBI's Dallas field office after the death early Friday of Christian Taylor, a 19-year-old African-American who was unarmed when shot by a white police officer. Johnson stressed the move "in no way diminishes my confidence" in local officers to conduct the investigation.

Arlington officer Brad Miller has been placed on administrative leave. Police say the officer, who joined Arlington police last year and was still completing his department field training, had never before fired his weapon in the line of duty.

Taylor's death came two days before the one-year anniversary of the death of Michael Brown, an unarmed, black 18-year-old who was fatally shot by a white police officer in Ferguson, Missouri. Brown's death galvanized the "Black Lives Matter" movement and sparked protests that at times turned violent.

Johnson mentioned the current climate during the news conference, noting that "our nation has been wrestling with the topics of social injustice, inequities, racism and police misconduct" and that his department would "pledge to act in a transparent manner."

Johnson said Miller and another officer found Taylor "freely roaming" inside the dealership's showroom when they arrived, sometime after 1 a.m. Friday.

The officers told Taylor to surrender and lie down on the ground, but he refused, the chief said. They saw him trying to escape the showroom and pursued him.

The incident ended with Miller shooting his service weapon four times at Taylor, hitting him at least twice, according to Johnson. The officer with Miller — his field training officer, a nearly two-decade veteran — used his Taser, but not a gun.

Johnson repeatedly refused to describe the confrontation or say how close Taylor got to either officer before Miller opened fire.

Police had gone to the Classic Buick GMC in Arlington, about 10 miles west of Dallas, after being contacted by a company that manages security cameras at for the car dealership. Police were advised that someone had driven a car onto the lot, started to damage another car, then drove his own vehicle into the glass front of the showroom. Johnson said Taylor appeared to have kicked out the windshield of a car.

Some of the nationwide criticism of police use of force in the last year has happened online, and Taylor's death resonated on social media, with some posts questioning the official account and calling for video to be released.

Police say they are investigating Taylor's death both as a possible criminal case and to determine whether department rules were broken.

Taylor graduated last year from Mansfield Summit High School in Arlington and was listed on Angelo State's roster as a 5-foot-9, 180-pound defensive back.