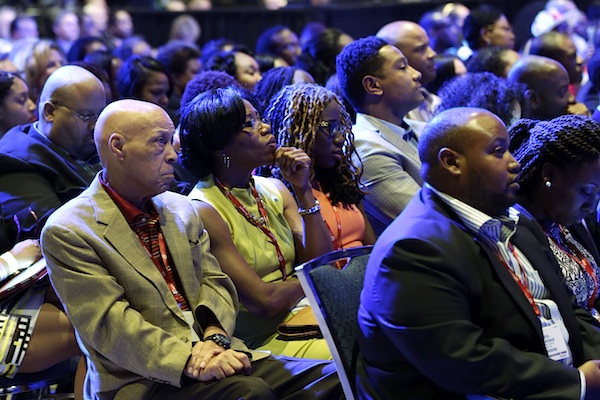 Republican presidential candidate Jeb Bush went into historically Democratic territory Friday to tell the predominantly African-American audience that the country's decades-long efforts to fight poverty are failing — and to claim that his record as Florida governor, especially in education, serves as a blueprint for a future presidency.

"For a half-century, this nation has pursued a 'war on poverty' and massive government programs, funded with trillions of taxpayer dollars," Bush told the annual conference of the National Urban League, one of the nation's largest civil rights organizations. "This decades-long effort, while well intentioned, has been a losing one.

"So many people could do so much better in life if we could come together and get even a few big things right in government," Bush said. "I acted on that belief as governor of Florida. It's a record I'll gladly compare with anyone else in the field."

That includes Democratic front-runner Hillary Rodham Clinton, who for the first time of the 2016 campaign appeared with Bush at the same event.

Within moments of taking the stage, Clinton sought to draw distinctions between herself and Republicans, including a reminder of the federal government's poor response to Hurricane Katrina a decade ago during the administration of Bush's brother, former President George W. Bush.

She also took a sly shot directly at Jeb Bush, not using his name but that of his super PAC, Right to Rise.

Clinton also lamented the deaths of Trayvon Martin and Sandra Bland and ticked off statistics on African-Americans receiving disproportionately longer sentences than whites. Blacks are also three times more likely to be denied a mortgage loan than people who are white, she said.

Clinton told the audience she has fought to tear down those barriers since her first job out of law school with the Children's Defense Fund. She said she fought for children's health insurance as first lady and spoke out on issues of economic equality for women.

"I'm planning to be president, and anybody who seeks that office has a responsibility to say it and, more than that, to grapple with the systemic inequities," she said. "I want you to know I see it and I hear you, and the racial disparities you work hard every day to overcome go against everything I believe in and everything I want to help America achieve."

Bush delivered his own set of reminders to the Urban League audience. He said that as Florida governor, he ordered the removal of the Confederate battle flag from the state capitol, raised the number of black judges and tripled the state's hiring of minority-owned businesses.

But he zeroed in on his efforts to reform education in the state by expanding school choice and raising test standards, hoping to connect with the African-American audience on what he called a critical issue to the nation's future.

"If we don't create an education system that allows young people to reach it, we're setting them up for a lifetime of failure," Bush said. "So you and I have to call this situation what it is — the worst inequality in America today, and the source of so many other inequalities."

Bush's time in office is not remembered as fondly by some Democrats in the state. State Sen. Arthenia Joyner, the Democratic leader in the state Senate, said Bush denied thousands of African-Americans the right to vote by purging state voter rolls. Joyner said Bush kept felons from restoring their voting rights and cut early voting hours as governor.

"If you are indeed sincere about being inclusive, then you need to first acknowledge your mistakes and unequivocally apologize directly the community you wronged," she wrote this week in a letter to Bush.

Others critics point to Bush signing into law the 2005 "stand your ground" legislation, which allows use of deadly force if people are in fear for their lives. Attorneys for neighborhood watch volunteer George Zimmerman, who shot and killed the teenage Martin in 2012 and was acquitted of murder, considered using a "stand your ground" defense in his case. Martin's parents were in the audience Friday.

Bush also had black supporters in the audience, including T. Willard Fair, who is president of the Urban League of Greater Miami and started a charter school with Bush. He praised Bush as "a different" Republican in an op-ed piece published Thursday in the Orlando Sentinel.

"I write this because I fear that many who look like me will do as I used to do before I met Jeb Bush — assume that if a candidate is Republican, they can't be for me," he wrote. "I'm writing today to tell you: 'Not this Republican.' This Republican is different."