Kenyan Security on High Alert Ahead of Obama Visit 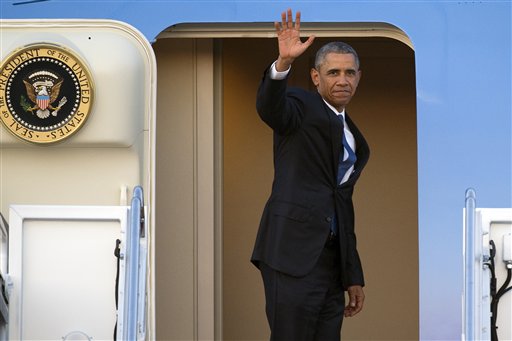 NAIROBI, Kenya(AP) — A massive security operation is in place to protect President Barack Obama during his visit to Kenya, which has been frequently targeted by al-Shabab militants based in neighboring Somalia.

Ahead of Obama's arrival Friday evening, large numbers of security forces patrolled in the Kenyan capital, Nairobi. Several U.S. military aircraft were spotted flying around the city. There have also been significant military attacks on Islamic militant targets in Somalia in recent weeks.

Major Nairobi roads will be temporarily closed and authorities said the international airport will be closed at times coinciding with Obama's landing and departure Sunday for Ethiopia. Safaricom, a mobile network operator, warned of disruptions whileObamais in Nairobi to meet entrepreneurs and hold talks with Kenyan President Uhuru Kenyatta.

"We recognize the fact that as the most protected individual in the world, there will be some security measures undertaken by his team which could include the temporary disruption of mobile signals close to where the President is at any given time," Safaricom said.

Al-Shabab, which is linked to al-Qaida, has conducted major attacks inKenya, including the 2013 attack on Nairobi's Westgate mall and an April attack in Garissa town that killed nearly 150 people.

This month, Somali officials said African Union and local troops seized Bardhere, one of the last major towns held by extremists in Somalia's southwest. A militant commander was also killed in a U.S. drone strike, according to Somali and U.S. officials.

A Somali intelligence official told The Associated Press that the use of surveillance drones has increased in the past two weeks.

"They are watching militants' movements towards Kenya so closely," said the official, who requested anonymity because he is not authorized to speak to the media.

Obama's schedule includes a Sunday address at a Nairobi stadium that will be broadcast live on Kenyan radio and television. U.S. Ambassador Robert Godec said attendance is by invitation only to representatives from "a wide range of Kenyan society" despite speculation that huge crowds would gather.

"We discourage people from coming to the venue if they're not explicitly invited," Godec said.

Obama, whose father was Kenyan, will have time for meetings with relatives during his visit, said the ambassador.

Sarah Obama, the matriarch of the Obama family, flew from the western Kenyan city of Kisumu to Nairobi on Friday ahead of a meeting with the American president, Kenyan media reported. Sarah Obamawas the second wife of Obama's grandfather and helped raise his father, Barack Obama Sr. The president referred to her as "Granny" in his memoir, "Dreams from My Father."

"Today, I am going to talk to him face to face," Sarah Obama, who is in her 90s, said before boarding the Nairobi-bound plane. She said she would try to convince Obama to visit his father's grave in the western village of Kogelo, though U.S. officials have said the president will not travel to the town on this visit.

"I will leave it to God," said SarahObama, who walked with a cane.