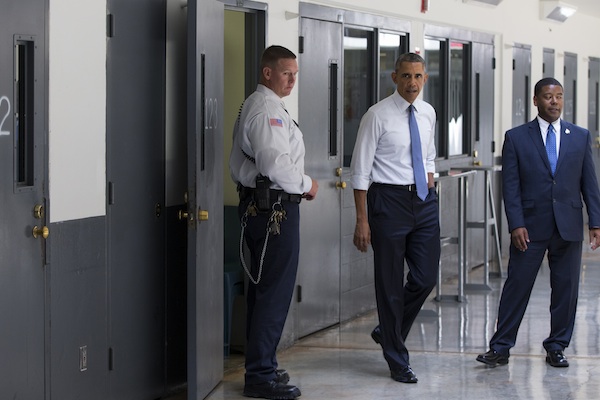 By Damon C. Williams Special to the NNPA from the Philadelphia Tribune
Published: 20 July 2015

PHILADELPHIA – Hours after announcing his administration had secured a multinational pact with Iran to limit their nuclear program, President Barack Obama told the NAACP national convention that race has always played an outsized role in incarceration.

"There is a long history of inequity in the justice system in America," Obama said in Philadelphia. "It's important for us to realize that violence in our communities is serious and that historically has effected the African-American community, which many times has been under-policed, rather than over-policed.

"Folks were very interested in containing the African-American community, which led to segregated areas, but within those areas, there wasn't enough police presence. But here's the thing, over the last few decades, we have also locked up more and more non-violent drug offenders than ever before for longer than ever before, and that is the real reason our prison population is so high."

Obama said there has been a prison explosion in the U.S. over the past 35 years.

"The United States is home to 5 percent of the world's population, but 25 percent of the world's prisoners. Think about that. Our incarceration rate is four times higher than China's. We keep more people behind bars than the top 35 European countries combined. And it hasn't always been the case – this huge explosion in incarceration rates. In 1980, there were 500,000 people behind bars in America – half a million people in 1980... Today there are 2.2 million. It has quadrupled since 1980. Our prison population has doubled in the last two decades alone."

He added that some people should be in jail, including murderers, predators, rapists, gang leaders, drug kingpins. But some low-level, first-time, non-violent drug offenders should not be among those incarcerated, the president said.

"Over the last few decades, we've also locked up more and more nonviolent drug offenders than ever before, for longer than ever before. And that is the real reason our prison population is so high," he explained. "In far too many cases, the punishment simply does not fit the crime. If you're a low-level drug dealer, or you violate your parole, you owe some debt to society.

You have to be held accountable and make amends. But you don't owe 20 years. You don't owe a life sentence. That's disproportionate to the price that should be paid."
And people of color are paying a higher price than anyone else, the president stated.

The bottom line is that in too many places, Black boys and Black men, Latino boys and Latino men experience being treated differently under the law."
Obama said he is in favor of reducing or eliminating mandatory minimum sentencing, and said he was hopeful of a bipartisan plan in Washington to address sentencing guidelines. Last week he became the first sitting president to visit a prison.

"Today, back in Washington, Republican senators from Utah and Texas are joining Democratic senators from New Jersey and Rhode Island to talk about how Congress can pass meaningful criminal-justice reform this year," Obama said. "That is very good news. This is a cause that is bringing people in both houses of Congress together and created some unlikely bedfellows."

The president named unlikely alliances such as the Rand Corporation and Newt Gingrich, Americans for Tax Reform and the ACLU, and the NAACP and the ultra-conservative Koch Brothers as examples of organizations and individuals that may have philosophical and ideological differences coming together over criminal justice reform.

"In far too many cases, the punishment simply does not fit the crime," Obama said. "Mass incarceration makes our country worse off and we need to do something about it."
He spoke one day after he commuted the sentences of 46 drug offenders, 14 of whom had been sentenced to life.
Despite the new interest among Republicans in criminal justice legislation, not all GOP legislators saw the president's commutations as a positive step.

"Commuting the sentences of a few drug offenders is a move designed to spur headlines, not meaningful reform," said Rep. Jim Sensenbrenner of Wisconsin, a member of the House Judiciary Committee who has proposed bipartisan legislation.

In his address to the NAACP, President Obama acknowledged that racial inequality remains a fact of life in the U.S.

And part of that is by design, he said.

"Part of this is a legacy of hundreds of years of slavery and segregation, and structural inequalities that compounded over generations. It did not happen by accident," he explained. "Partly it's a result of continuing, if sometimes more subtle, bigotry – whether in who gets called back for a job interview, or who gets suspended from school, or what neighborhood you are able to rent an apartment in – which, by the way, is why our recent initiative to strengthen the awareness and effectiveness of fair housing laws is so important. So we can't be satisfied or not satisfied until the opportunity gap is closed for everybody in America. Everybody."

(The NNPA News Service provided additional reporting for this story)