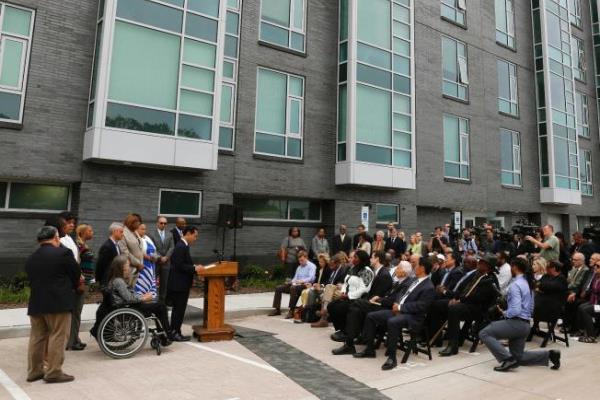 "The truth is for too long federal efforts have often fallen short," Housing and Urban Development Secretary Julian Castro said at a news conference next to new public housing apartments and a playground on Chicago's South Side.

Besides banning outright discrimination, the 1968 law required cities that receive federal housing money to promote equal opportunity and access to housing regardless of race, origin, religion, sex or disability. But little was done at the time or in the years since to explain precisely what the law's requirement to "affirmatively further" such goals meant or how to achieve that.

The Obama administration's changes aim to provide cities with specific guidance and reams of data on integration and segregation patterns, racially and ethnically concentrated areas of poverty and areas of high housing need.

Communities will be required to set goals based on the data for smarter investments in housing, schools and transportation that will be closely monitored, Castro said. The new rules will be phased in, though no timetable was announced.

The new initiative recognizes that half a century after the height of the civil rights movement, parts of America remain divided along racial lines when it comes to access to affordable housing in good neighborhoods with decent schools, public transportation, jobs, grocery stores and opportunity.

"Where a child grows up shouldn't dictate where they end up," Castro said.

To illustrate the persistent inequality, he cited data showing that a child in the Jeff-Vander-Lou neighborhood of St. Louis can expect to live 18 fewer years than one 10 miles away in the suburb of Clayton, Missouri.

"This is the federal government saying 'This can't continue to go on,' " said Nyden, director of the Center for Urban Research and Learning at Chicago's Loyola University.
He called the announcement a good step, though he cautioned against any expectation of quick results, given that the problem is so entrenched.

Mayor Rahm Emanuel, speaking alongside Castro, said it was no coincidence Chicago was chosen as a backdrop for the announcement, given the city's history of using housing policy and real estate practices to keep blacks confined to poor neighborhoods.

"We have a long history as it relates to fair housing," Emanuel said while standing at the site of what was once Stateway Gardens, one of the city's neglected high-rise public housing projects. Chicago demolished it and the other projects in the late 1990s and early 2000s.

On Wednesday, Emanuel cut the ribbon on the latest low-rise apartment building to replace Stateway on what's now known as Park Boulevard, an example of the new kind of public housing developments that federal officials are promoting.

The development, open to people of various income levels and has a mix of homeowners and renters, is dotted with town house-style buildings, neatly landscaped walkways, playgrounds and open spaces.

Most importantly, Emanuel said, a vibrant area of opportunity is developing around the complex.

Retailers, including a Starbucks, have moved in. To the west is U.S. Cellular Field, home of the Chicago White Sox; to the east is a math and sciences charter school; and just to the north is the Illinois Institute of Technology. Three commuter train lines shuttle residents downtown — and toward higher-paying jobs.

Roberta Wright, 44, loves the area. She lives there with her two adult children, a son who's in the Army and a daughter attending Illinois State University.