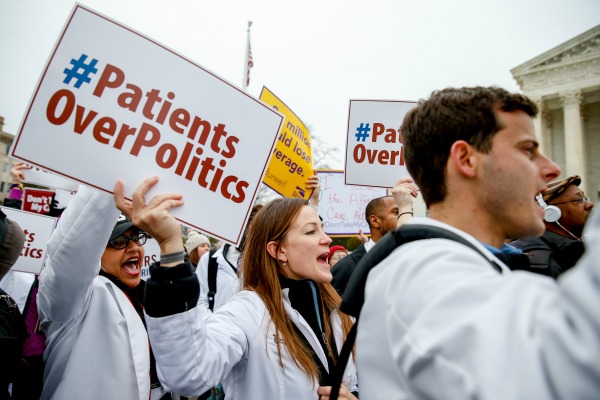 WASHINGTON (AP) — House and Senate Republican leaders are ready to update rank-and-file GOP lawmakers about their proposals for responding to a Supreme Court decision that could abruptly halt federal health care subsidies for millions of people.

On Tuesday, some GOP aides said their House and Senate leaders were working toward an agreement to temporarily continue some aid to Americans now receiving the subsidies and curb some requirements of the 2010 law derisively referred to by opponents as "Obamacare." Others said the two chambers' leaders had no final plans and said the briefing sessions were designed to give lawmakers status reports and get feedback.

Republicans were hoping a court ruling striking down the taxayer-paid subsidies would let them take the political offensive and try forcing major changes in the statute, which GOP lawmakers have derided as a failure. Such an effort would be sure to encounter solid Democratic opposition and a veto from the president, who has championed the law's extension of health coverage to millions.

"We will take the opportunity to protect the people from Obamacare's broken promises and to provide freedom to the people who are trapped in Washington-mandated health care," Sen. John Barrasso, R-Wyo., a leader of his party's efforts to fashion a response, said Wednesday.

The Supreme Court is expected to rule by the end of month on a lawsuit brought by conservatives and backed by the GOP. They say that under the 2010 law, the aid is limited to states operating their own insurance marketplaces, and is not allowed for the roughly three-dozen that use the federal HealthCare.gov website.

Democrats say the overall bill's context makes clear that the subsidies were designed to go to residents of every state.

In the 34 states likeliest to be hit hardest should the justices erase those subsidies, about 6.4 million people receive the aid, averaging $272 monthly, according to the Health and Human Services Department. Analysts have warned that most of those people would no longer be able to afford health coverage if the assistance was ended.

Many GOP leaders want to temporarily continue some form of aid but also pare back Obama's law, including ending its requirements that most people buy coverage and most companies provide it to workers. They would also give states more power to decide what types of coverage insurers must provide.

The health law's subsidies are currently paid to recipients as tax credits. Two aides said under the House GOP's plans, states next year would be given federal block grants for aid programs they could establish, in amounts comparable to the tax credits people in each state would have received.

Republicans have so far been divided over what their response to the law suit should be, including some conservatives who say the statute's subsidies should be completely ended and the law dismantled.

"I'm not sure how I go back and tell people that I ran trying to undo Obamacare, and that the first real chance I get, I vote to extend one of the most heinous parts of the law," said conservative Rep. Mick Mulvaney, R-S.C.

Many Republicans say since Obama would not let them kill his law, a complete overhaul will have to await the 2016 elections, when the GOP hopes to capture the White House and retain congressional control.

Donald Stewart, spokesman for Senate Majority Leader Mitch McConnell, R-Ky., said GOP leaders have been working toward "a responsible approach to protect families" from the health care law. He said the meeting with Republican senators would be "the latest in a series of briefings with our members."

Several other Republican aides spoke on condition of anonymity because they were not authorized to discuss the plans publicly.