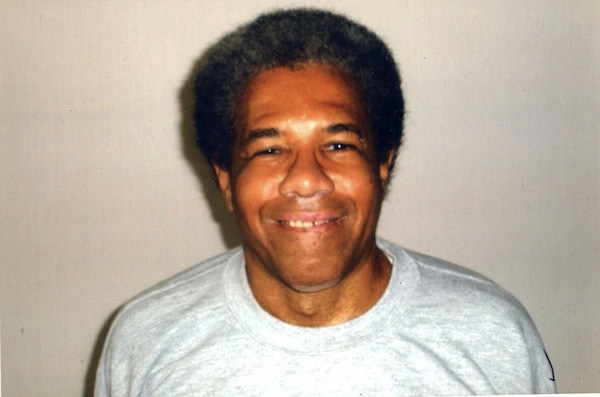 ST. FRANCISVILLE, La. (AP) — Prison activist Albert Woodfox, the last member of the "Angola Three" inmates held for decades in solitary confinement, will have to wait a bit longer to see if he'll experience the "immediate" and "unconditional" freedom ordered by a federal judge.

A federal appeals court on Tuesday temporarily blocked the release of Woodfox, who spent more than 40 years in isolation after being accused of killing a guard. His supporters say it was retribution for his Black Panther Party activism to protest prison conditions.

Tuesday's order came a day after a federal judge ruled that the state can't fairly try Woodfox, now 68, a third time for the killing of a prison guard 43 years ago, and that the "only just remedy" would be setting him free after all the years he spent in "extended lockdown."

Woodfox has long maintained his innocence in the guard's killing, which happened during protests of brutal conditions inside the huge penitentiary built on a former slave plantation in Angola, Louisiana. His two previous convictions were overturned for racial prejudice and lack of evidence.

Louisiana Attorney General Buddy Caldwell is appealing the order by U.S. District Judge James Brady, saying Woodfox is a killer who should remain locked up. The stay by the 5th U.S. Circuit Court of Appeals in New Orleans blocks his release until 1 p.m. Friday, providing time for the court to decide whether to accept the state's appeal.

Woodfox is currently being held at the West Feliciana Parish Detention Center in St. Francisville, where he was transferred in preparation for a third trial. His attorney, George Kendall, met with Woodfox on Tuesday after the stay was granted.

Kendall said he is "hopeful and optimistic" the court will release Woodfox while the state's appeal is pending. But he acknowledged the court could order Woodfox to stay in jail while that process plays out.

Kendall described the conditions Woodfox has served his time under as "brutal," and blasted the attorney general for fighting to keep him incarcerated.

"This case ought to end," he said.

While not awaiting trial or attending hearings, Woodfox has remained in state prisons. Most of the time was spent at Angola, where for decades an "extended lockdown review board" renewed the decision to hold him in isolation every 90 days, his attorneys say. His attorneys say he was denied contact with the general prison population and kept in a roughly 55-square-foot cell 23 hours a day.

The isolation continued when he was moved to another state prison in 2010.

Amnesty International and the United Nations have condemned Woodfox's imprisonment as inhumane. Human rights advocates call it a form of torture.

But he has been allowed visitors and reading material, and can see a television through the bars on his cell. State officials dispute that his circumstances constitute "solitary confinement," saying he is able to communicate with others, including other inmates and chaplains, through the bars of his cell.

"The perception of 'solitary confinement' is a far cry from the reality," said Aaron Sadler, a spokesman for the Attorney General's office.

Angela Allen-Bell, an assistant professor of legal writing and analysis at Southern University Law Center in Baton Rouge, said she talked with Woodfox on Monday night. She said he has been having panic attacks and is suffering from health problems, including diabetes.

"He does not allow himself to be very optimistic about things. I think that that is a coping mechanism that he has developed. But we talk often about the power of prayer and the ability of God to deliver miracles. And I do believe that he believes that that is possible," Allen-Bell said.

All three were active in hunger strikes and work stoppages that spurred improvements to prison conditions, and all three suffered harsh treatment thereafter as prison authorities kept them isolated at Angola to prevent more disruption behind bars.

Parnell Herbert, a 66-year-old New Orleans playwright and boyhood friend of Woodfox, said that at one point, the Angola Three refused to submit to dehumanizing cavity searches for contraband. They were then taken to a chamber where prison guards beat them with clubs and baseball bats, but they eventually won a battle in court to end the searches.

"Albert told me, 'They will never break me,'" Herbert said.

In ruling against a third trial, Brady cited the inmate's age and poor health; the unavailability of witnesses; "the prejudice done onto Mr. Woodfox by spending over forty years in solitary confinement"; and "the very fact that Mr. Woodfox has already been tried twice" before his convictions were overturned.

Wallace died in October 2013, days after a judge freed him and granted him a new trial. King has become a public speaker since his release in 2001 after the reversal of his conviction in the death of a fellow inmate in 1973.