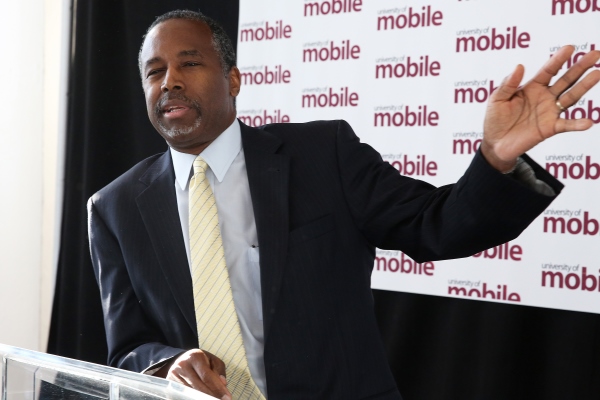 Dr. Ben Carson has never held public office, but he hopes to parlay fame as a surgeon, author and conservative commentator into an outsider's campaign against established politicians.

"I believe in a safety net for people who need a safety net," he says, acknowledging that his mother sometimes accepted government assistance when he was a child. But, he added, "I do not believe in a system that puts people in a chronic state of dependence."

He talks openly of his religious faith. Carson also is the only African-American in the Republican field when GOP leaders acknowledge the party's need to attract more non-white voters. But he also blisters President Barack Obama, who remains extremely popular among African-Americans.

The challenge for Carson is to capitalize on being the anti-politician while still mounting an effective campaign. Just as important, can he avoid mistakes that hobble longshot candidates? A recent example: Carson told CNN that being gay is "absolutely" a choice; he apologized after an uproar.

Perhaps his greatest single professional achievement came in 1987, when Carson led the first successful separation of twins connected at the back of the head. He has served on corporate boards and the governing board of Yale University, his undergraduate alma mater.

In 2008, President George W. Bush awarded Carson the Medal of Freedom, the highest civilian honor the U.S. government bestows. He speaks and signs books across the country and appears regularly on Fox News, which feeds his popularity among conservatives.

About his political inexperience, he says: "It's not about me. It's about 'we the people.' "

Carson grew up in Detroit and tells audiences of a bare-bones childhood in which his single mother, who didn't finish elementary school, struggled to get by.

Carson concedes she sometimes took welfare assistance, but criticizes a culture that he says grew up around that help — of liberal politicians offering welfare in exchange for votes.

"Whenever the government would announce a new program, people were so excited, 'Yeah, we're going to get more goodies,' " he told a tea party convention in January.

Carson said he learned from that upbringing that "the person who has the most to do with what happens to you in life is you. It's not somebody else. It's not the environment. We have got to get that message to Americans, that you are not a victim."

Besides his bachelor's from Yale, Carson holds a medical degree from the University of Michigan. Carson and his wife, Candy, have been married since 1975. They have three sons.

The 2009 movie "Gifted Hands" featured Cuba Gooding Jr. as Carson. But the doctor's political coming out happened when he was keynote speaker for the 2013 National Prayer Breakfast. Only feet away from Obama, Carson used his platform to disparage Obama's health care law, the progressive income tax structure and rising national debt, among other things. In particular, the speech raised Carson's profile as a conservative front-man on health care policy.

Carson has made trips to Iowa, New Hampshire and South Carolina, but not as often as his rivals.

Carson has released eight books, from his autobiography, "Gifted Hands," to his latest political commentary, "One Nation: What We All Can Do to Save America's Future."