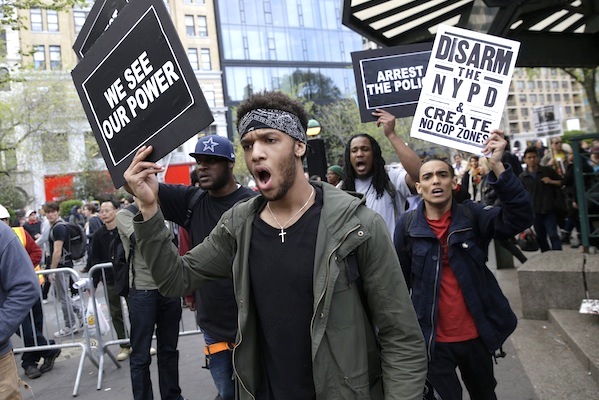 From Portland, Seattle, Yakima and Oakland to Denver, Chicago and New York, protesters turned out on May Day to say Black Lives Matter and so do immigrants and workers rights. Here's what happened around the country as reported by The Associated Press:

PORTLAND
Police in Portland, Oregon, said an initially peaceful May Day demonstration turned violent Friday evening as a splinter group hurled chairs and other objects at officers. Police temporarily closed a major city bridge and used pepper spray on some demonstrators when a march deviated from its permitted route through downtown.
One officer was injured and taken to a precinct for medical treatment.
The Burnside Bridge over the Willamette River was closed for about a half-hour during the height of the evening commute when protesters tried to force their way across. The protest caused major delays for commuters.
Hundreds of protesters joined the evening crowd.
The Oregonian reported that about 100 protesters also skirmished with police at the Pioneer Courthouse Square, surrounding an unmarked SUV with officers inside. Bicycle officers created a path for the SUV to leave the scene. Police say they used flash grenades to allow officers to safely withdraw from the crowd. The crowd broke up a short time later.

SEATTLE
Dozens of Seattle protesters at a Black Lives Matter event joined hundreds who gathered for workers' and immigrants' rights.
Seattle police say black-clad May Day marchers hurled wrenches and rocks at officers and hit police with sticks as a Friday evening march through a Seattle neighborhood turned violent, injuring three officers.
Police responded with pepper spray and pepper balls, quickly arresting three people. That brought the day's Seattle demonstration arrest total to four.
Bicycle officers shadowed the marchers, who changed direction often. Their evening event had been billed as an anti-capitalist march.
Hundreds of people earlier joined in May Day marches in Seattle and Yakima, Washington, in support of workers' rights and other causes.
Police said the earlier arrest came when a man threw a rock at a window.
The initial Seattle march ended with a rally at the downtown federal courthouse.

YAKIMA
In the central Washington city of Yakima, a crowd of at least 500 marchers called for increased attention to immigrant and worker rights.
Earlier in the day, hundreds took to the streets to celebrate International Workers' Day and protest police violence.

NEW YORK
About 1,000 protesters decrying police brutality have marched in downtown New York at a May Day rally that took on a new message amid national outrage over a Baltimore man's death in police custody.
Demonstrators streamed through blocked-off streets, bearing signs with such messages as "Disarm the NYPD" and "Justice for Freddie Gray," the 25-year-old who died in Baltimore.
At least one man was arrested after he tried to jump over a police barricade, but the procession generally went calmly.
After the march reached its scheduled end at a lower Manhattan plaza, tensions flared as some protesters continued marching on nearby streets. As police used a loudspeaker to order the demonstrators to get onto the sidewalk, some protesters shouted back.
Some activists and officials had criticized the New York Police Department's handling of protests Wednesday over Gray's death. They say police were overly aggressive while arresting more than 140 people when some demonstrators splintered off, trying to get on a highway and block tunnel entrances.

OAKLAND
In California, gathered for a rally at an Oakland train station. Labor, immigrant and civil rights activists in several California cities called for civil rights and an end to police brutality. Protesters marched in San Francisco, Los Angeles, Anaheim and Riverside County.
The May Day protest outside Oakland's City Hall has swelled to more than a thousand people — one of several demonstrations by labor, immigrant and civil rights activists in cities across California.
The protesters are decrying racism, police brutality and income inequality in a loud, sign-waving march from the Port of Oakland to Frank Ogawa Plaza in downtown Oakland.
Some of the demonstrators are holding signs reading "Racism is the Disease," ''Black Lives Matter" and "Stop Police Brutality." Others say they want better wages and working conditions for the masses.
Across the bay, about 100 people gathered at Civic Center in San Francisco for a May Day rally before marching to the Mission neighborhood.

CHICAGO
About 400 people have marched in Chicago, some to protest recent police shootings and some to recognize May Day's message of workers' rights.
Seventy-three-year-old activist Richard Malmin says he participates every year but that this rally is bigger due to the death of Freddie Gray, whose spine was severed while in Baltimore police custody last month. Activists added anti-police brutality to their messages.

DENVER
A protest in Denver that drew about 25 people has kept its focus on inequality rather than police brutality issues that several other protests around the country planned to rally against.
Demonstrator David Garner says he's concerned about economic inequality, especially for people of color. May Day is historically a day where labor supporters rally for workers' rights.
Friday's protest near the state Capitol had been mostly peaceful unlike Wednesday night when Denver police arrested 11 people during a demonstration over the death of Freddie Gray. Gray died after his spine had been severed while in Baltimore police custody. Charges against six officers were announced Friday.

MINNEAPOLIS
High school students who walked out of school are among hundreds who marched downtown in Minneapolis, protesting Freddie Gray's case and in support of Black Lives Matter.

MAY DAY
May Day has historically been a day when demonstrators rooted deeply in the labor movement call for workers' rights. But in recent years, immigration reform and civil rights issues have been adopted.
This year, marches supported "Black Lives Matter," a growing movement in the wake of a series of deaths of black men during police encounters. Protests in Philadelphia and Baltimore on Thursday were in support of Freddie Gray, who died a week after police took him into custody.