Sen. Bernie Sanders: Who He Is and Where He Stands 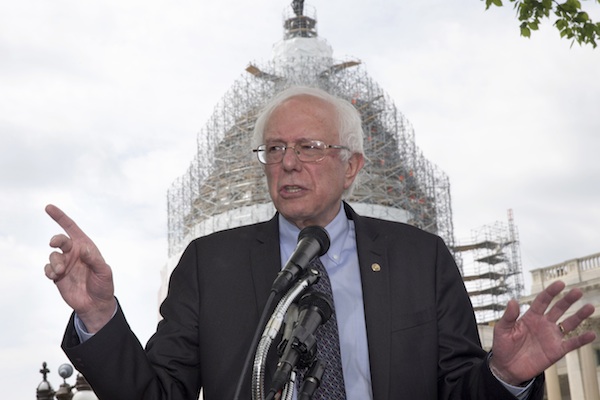 Dave Gram, and The Associated Press
Published: 02 May 2015

Sen. Bernie Sanders of Vermont is Hillary Clinton's new opponent on the left. He became an activist during the civil rights movement, calls himself a democratic socialist, and wants to break up the big banks and ditch Citizens United. But can a firebrand speaker who once crashed the Senate video server because so many people tuned in to listen to him capture the hearts and minds of American voters? Here's the basics on who he is and what he stands for.

A self-described "democratic socialist" who says he likes Scandinavian-style government, Sanders was credited as mayor of Burlington in the 1980s with leading an urban rebirth in Vermont's largest city, then went on to serve eight terms in the U.S. House. He is in his second term in the U.S. Senate.

RESUME REVIEW
Sanders was active in the Student Nonviolent Coordinating Committee while at the University of Chicago in the early 1960s. He joined the March on Washington, which featured the Rev. Martin Luther King Jr.'s "I have a dream" speech, in 1963. He later joined the influx of counterculture, back-to-the-land migrants to Vermont and held various jobs, including carpenter and filmmaker. He was an early member of the Vermont-based Liberty Union Party, but had more success running for office as an independent. Drawing on support from University of Vermont students and others, Sanders upset the longtime incumbent mayor of Burlington by 10 votes in 1981 and served the rest of the decade in that post. He won election to Vermont's lone congressional seat in 1990 and to the Senate in 2006. He has continued with the independent label, but he caucuses with Democrats and serves as ranking member of the Senate Budget Committee.

PERSONAL STORY
Sanders has said he grew up "solidly lower middle class" in a Jewish family in Brooklyn, and still carries that New York borough's thick accent. His father, an immigrant from Poland, sold paint for a living —and Sanders' views about the distribution of wealth were formed early. "A lack of money in my family was a very significant aspect of my growing up," he said in December. "Kids in my class would have new jackets, new coats, and I would get hand-me-downs."

CALLING CARD MOMENT
Sanders took to the Senate floor in December 2010 and thundered for more than eight hours about a tax-cut package and Congress' failure to provide enough money, in his view, for education and social programs. With his trademark sarcasm, he mocked the rich, yelling: "How can I get by on one house? I need five houses, 10 houses! I need three jet planes to take me all over the world!" The speech was so popular it crashed the Senate video server. It was later printed in a small book.

EARLY CAMPAIGN ACTION
Tad Devine, a longtime Democratic strategist who worked on Sanders' campaigns in the 1990s, has signed on as an adviser. The senator has been traveling the country in recent months, especially to the early caucus and primary states of Iowa, New Hampshire and South Carolina, drawing big and enthusiastic crowds as he speaks about wealth inequality and the need to get serious about climate change. Even so, he's considered a longshot in a nomination contest dominated by Hillary Rodham Clinton.

Where Sen. Sanders stands on:

ECONOMY
Sanders, a self-described "democratic socialist," has been pushing for higher taxes on the rich and more money for programs serving the middle class and poor since long before talk of income inequality became fashionable. He has long supported creating a public health care system similar to Canada's and Britain's. He favors equal pay for women, a higher minimum wage and stronger labor rights. He frequently expresses outrage that a "billionaire class" has taken too much control over the American political and economic systems, and labeled it "beyond belief" when the House voted last month to provide $269 billion in tax cuts for the wealthy. He has backed legislation to crack down on offshore tax havens. Recent legislation backed by Sanders would provide more youth jobs, expand Social Security and increase the estate tax. He supports a five-year, $1 trillion plan to rebuild roads, bridges and other infrastructure. He says that would create 13 million jobs.
___
FINANCIAL REGULATION
Sanders wants to break up Wall Street "megabanks," saying if they're too big to fail, they're too big to exist. He has been a critic of the 1999 repeal of the Depression-era Glass-Stiegel Act, which had mandated that commercial banks and securities firms remain separate. Sanders said in 2013 that the 10 largest banks in the United States had grown bigger than before a government bailout helped them out of the 2008 financial crisis. He says the Justice Department has not been aggressive enough in prosecuting bad actors in the banking industry.

TRADE
Sanders is a critic of trade deals who says the North American Free Trade Agreement and most-favored nation status for China have caused big job cuts in the United States, especially in manufacturing. He has rallied with labor and environmental groups against a proposed new trade deal, the Trans-Pacific Partnership, involving the U.S., Canada and Asian countries, saying it will be a boon to big business but bad for workers.

FOREIGN POLICY
Sanders supports the use of air strikes and limited use of special forces in the fight with Islamic State militants. He opposes sending U.S. ground troops into the region. He does not support the Obama administration's recent request to Congress for an authorization to use military force "without clearer limitations on the role of U.S. combat troops." He favors a two-state solution to the Palestinian-Israeli conflict, and says he wants to see no more settlements in disputed territories as well as an unequivocal acknowledgment by the Palestinians of Israel's right to exist. Sanders has cheered the Obama administration's recent efforts to open relations with Cuba.

ELECTIONS
Sanders criticizes the Supreme Court's decision in the 2010 case known as Citizens United. He maintains the ruling has unleashed a torrent of unaccountable donations into the political system by wealthy donors, giving them too much control over government policy. He supports a proposed constitutional amendment that would effectively overturn the decision. Sanders opposes voter ID laws, saying there's scant evidence of the voter fraud described by the laws' supporters, and says a requirement to show ID presents the most difficulty to minority, young and elderly voters.

SOCIAL ISSUES
Sanders was an early supporter of same-sex marriage, voting against the Defense of Marriage Act in the mid-1990s. He favors abortion rights, opposes the death penalty and has indicated his opposition to a philosophical exemption for parents who don't want their children vaccinated. He said he is sensitive to families' wishes, but "If I have a kid who is suffering from an illness who is subjected to a kid who walks into a room without vaccines, that could kill that child and that's wrong."

CLIMATE CHANGE, ENVIRONMENT
Sanders opposes the Keystone XL Pipeline, proposed to ship oil from the Canadian prairie to refineries in Texas. He has introduced legislation to institute a carbon tax, and separate legislation to end tax breaks for fossil fuel companies. He has labeled climate change an issue of transcendent importance and called for immediate steps to slow its pace.