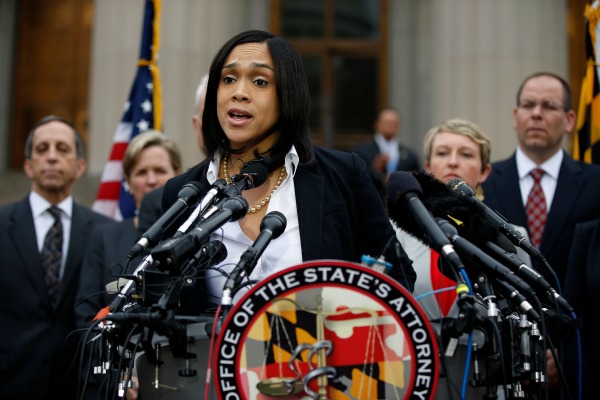 Saying "no one is above the law," Baltimore's top prosecutor announced charges Friday for six officers who were involved in the arrest of a black man who suffered a fatal spinal injury in police custody, a decision that comes amid outrage around the country over police brutality against African-Americans.

State's Attorney Marilyn Mosby declared that Freddie Gray's death was a homicide, his arrest was illegal, and his treatment in custody amounted to murder and manslaughter. She said even though Gray requested medical help several times, officers repeatedly missing opportunities to get it for him.

"The findings of our comprehensive, thorough and independent investigation coupled with the medical examiner's determination that Mr. Gray's death was a homicide," Mosby said, "we have probable cause to file criminal charges."

Onlookers cheered and expressed amazement over Mosby's announcement, which few expected so quickly. The city, which has been on edge and seen looting and a riot after Gray's death on April 19, was still under a nighttime curfew and National Guard troops and police were out in full force.

Whoops, cheers and shouts of "Justice!" erupted on the steps of the War Memorial Building, and in the streets of Baltimore, which has faced nearly two weeks of growing anger over Gray's death. Mosby announced the charges one day after receiving the results of the internal police investigation and the autopsy report. As she spoke, the city braced for huge protests Friday and Saturday.

"Mr. Gray suffered a severe and critical neck injury as a result of being handcuffed, shackled by his feet and unrestrained inside of the BPD wagon," she said.

The stiffest charge -- second-degree "depraved heart" murder -- was filed against driver of the police van. The other five were charged with crimes including manslaughter, assault, false imprisonment and misconduct in office.

Fraternal Order of Police local president Gene Ryan told Mosby in a letter before the charges were announced Friday that none of the six suspended officers were responsible for Gray's death.

President Barack Obama said it was "absolutely vital that the truth comes out." He said he doesn't comment on the legal process.

"But I can tell you that justice needs to be served. All the evidence needs to be presented," he said. "Those individuals who are charged obviously are also entitled to due process and rule of law."

Mosby said Gray was illegally arrested and assaulted. He was handcuffed and then hoisted into the metal compartment of a police van without the seatbelt that all officers are told they must put on for safety of both detainees and officers. The van's driver failed to restrain Gray five different times.

The officers later failed to get medical help even though Gray requested it repeatedly, she said. At some point along the way, he suffered a mysterious spinal injury and died a week later.

Mosby said what police described as an illegal switchblade — Officer Garrett E. Miller swore in a court record under penalty of perjury that he found such a knife clipped inside Gray's pants pocket — was actually a legal knife, and provided no justification for Gray's arrest.

The van driver, Officer Caesar R. Goodson Jr., faces up to 30 years on the murder charge, and 10 years each for involuntary manslaughter, assault and "manslaughter by vehicle." All of the officers also face a charge of misconduct in office.

Warrants were issued for their arrest and they were expected to turn themselves in Friday.

Mosby said she comes from five generations of police officers, that she respects and honors how police serve the people, and that this case should in no way damage the relationship between police and prosecutors in Baltimore.

She swiftly rejected a request from the Baltimore police officers union asking her to appoint a special independent prosecutor because of her ties to attorney Billy Murphy, who is representing Gray's family. Murphy was among Mosby's biggest campaign contributors last year, donating the maximum individual amount allowed, $4,000, in June. Murphy also served on Mosby's transition team after the election.

Before Gov. Larry Hogan visited a fire station Friday, a man leaning out of a passing truck window pumped both arms in the air and yelled, "Justice! Justice! Justice!" When Hogan arrived, he said he was focusing on keeping Baltimore safe.

"I want to continue to ask for calm and peace," Hogan said.

At the corner of Pennsylvania and North avenues, where the worst of the rioting took place on Monday, drivers honked their horns. When buses stopped in front of the subway station, people spilled out cheering as the doors opened.

There was no large gathering at the intersection immediately after the announcement, though: Nearly 100 police in riot gear were deployed, and for the moment, they had nothing to do.

Ciara Ford, of Baltimore, expressed surprise at the decision to prosecute.

"I'm ecstatic," she said. "I hope this can restore some peace."

"It makes you cry," said her friend, Stephanie Owens of Columbia.

They both hoped the officers would be convicted. And both believed that the protests in the city made a difference in ensuring that authorities took the case seriously.

"If we had kept quiet, I don't think they would have prosecuted," Ford said.

The charges, and Mosby's detailed explanation of what happened, are a first step toward transparency, he said.

"She took the time to critique the evidence," Sutton said, noting that the officers faced different charges specific to their actual alleged misconduct. "To have each person charged with what they actually did . to have it come out this quick — this is something else."

He shuddered to think what the intersection would have looked like if she had announced that no charges would be filed.

"We wouldn't want to imagine what was going to happen right here," he said.