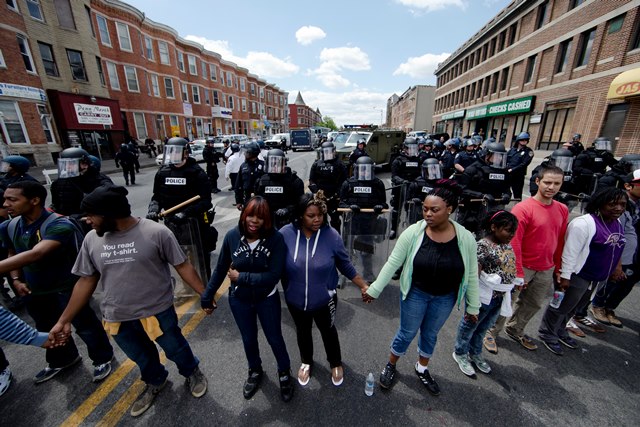 by Roberto Alejandro, Special to the NNPA from the Afro-American Newspaper
Published: 28 April 2015

Baltimore’s police union has not sent a representative to a meeting of the city’s Civilian Review Board since 2009, according to information provided by Kisha Brown, director of Baltimore City’s Office of Civil Rights and Wage Enforcement.

The last representative sent by Baltimore’s Fraternal Order of Police Lodge No. 3 was Michael Pratt in May 2009. A message left on union president Gene Ryan’s mobile phone requesting comment on April 23 was not returned. But while the union’s absence from a board ostensibly tasked with overseeing the relationship between the police and the community is troubling—particularly in light of the tensions that have surfaced since the in-custody death of Sandtown-Winchester resident Freddie Gray—they are hardly the only ones to neglect the review board.

The Vanguard Justice Society, an advocacy organization for officers of color, and one that has been critical of policing in Baltimore City, has apparently never sent a representative to the board.

The Fraternal Order of Police and the Vanguard Justice Society are non-voting members, however, they can add the perspective of law enforcement officers to better inform the decisions of the board. Four of the city’s nine police districts, each of which has a voting seat, have effectively been without a voting member for some time – a potentially troubling fact for a city that has to regularly confront breakdowns in the relationship between the community and its police. The Northeastern District has been without a representative since January 2014. The Southeastern District seat has, for all intents and purposes, been vacant since 2006 (City Hall appointed a representative, Jason Filippou, to the district in 2013, but he only attended one meeting in that year and none since). The Northern District slot has also been effectively vacant since 2009—an appointment also was made in 2013 but the person resigned in 2014 without apparently having attended any meetings.

The Western District—the district in which Freddie Gray was arrested and sustained the injuries that ultimately led to his death—has an appointee, Pearlette Anderson Lansey, but she has only attended two meetings, and that in 2014. The Civilian Review Board meets monthly.

According to an e-mail from Brown, who took over the Office of Civil Rights and Wage Enforcement this past February, “The City Code allows for those who do not attend at least 50 [percent] of the meetings to be removed from the Board. I am in the process of gathering names for the Board to present to the Mayor.”