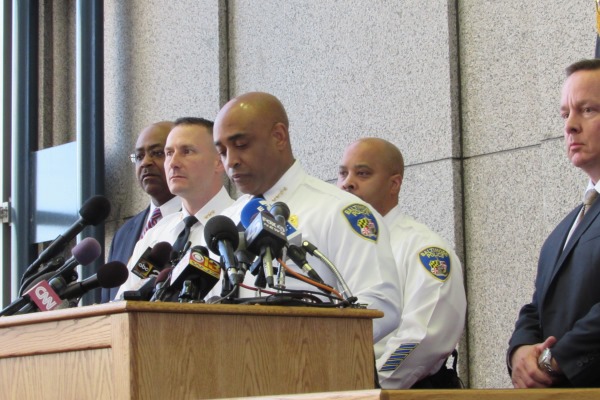 by Roberto Alejandro, Special to the NNPA from the Afro-American Newspaper
Published: 28 April 2015

Baltimore City officials are walking a tightrope as they seek to balance the public’s right-to-know and frustration against protecting the integrity of the investigation into the death of Freddie Gray while in police custody.

“I recognize that there’s frustration over this investigation,” said Mayor Stephanie Rawlings-Blake on April 24, speaking to members of the local and national media at City Hall. “But I want to be clear: there is a process, and we have to respect that process. In order to have justice, and not just seek justice, the investigation has to follow procedures.”

Surrounded by clergy members from the Baltimore area, the mayor offered condolences to the family of Gray, the West Baltimore man who died on April 19, one week after suffering three broken vertebrae in his neck and a crushed voice box while in police custody on April 12. Rawlings-Blake also praised demonstrators for staging what had been peaceful protests, said she demanded answers in what happened to Gray, and indicated that all information collected by the Baltimore Police Department in the investigation of Gray’s death would be turned over to Baltimore City State’s Attorney Marilyn Mosby on May 1 for independent review.

The city has seen five straight days of demonstrations—with a major action planned for April 25—from residents demanding not only answers, but indictments. Many protestors have expressed frustration with what feels to them like the glacial pace of information being released by the city about what happened to Gray; but as Baltimore City Police Commissioner Anthony Batts said at his own press conference about two hours after the mayor’s press conference, doing otherwise could compromise the very quest for accountability the community is seeking.

“What you see us tap dancing on and balancing here is that if someone harmed Freddie Gray, we’re going to have to prosecute. And so giving too much information out to you on the front here now may jeopardize that prosecution. So we’re trying to be as open and transparent as possible, but if somebody harmed him, they have to be held accountable, and we don’t want to give all the information that we have.”

The commissioner did give a number of updates of what he said the Baltimore Police Department’s investigation had uncovered so far. Gray was not secured with a seat-belt in the transportation wagon that was transporting him from the scene of the arrest to the Western District police station, “as he should have been,” said Batts.

“No excuses for that, period,” said the commissioner.

Later on in the press conference, Baltimore Police Deputy Commissioner Kevin Davis, after describing the foot chase that ended in Gray’s apprehension on the 1700 block of Presbury St., said, “And quite frankly, that’s exactly where Freddie Gray should’ve received medical attention.”

According to Batts, five of the six suspended officers have given statements, while one has continued to invoke his or her “rights.” Because of the nature of the investigation, officers are protected both by their Fifth Amendment rights under the U.S. Constitution against self-incrimination, as well as their rights under Maryland’s law enforcement officer’s bill of rights, which gives police officers 10 business days to attain legal counsel before they can be questioned in an administrative (internal) investigation. It was not clear which set of rights the officer was invoking.