No Time To Lose: Global Response To Nepal Quake Gears Up 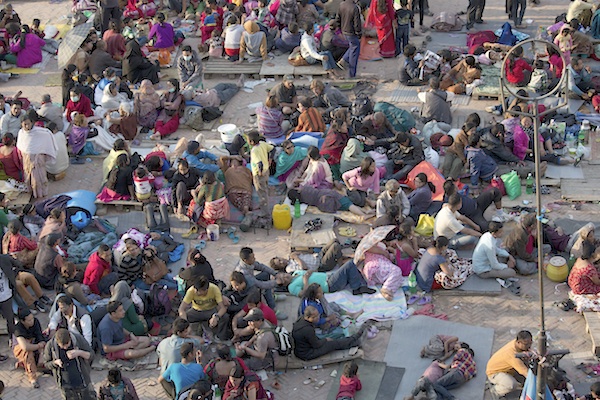 LONDON (AP) — There is still time to save lives — that's why governments and aid agencies Sunday rushed doctors, volunteers and equipment to Nepal without waiting for the dust to settle.

More than 3800 people have died in Nepals biggest earthquake in 80 years. An aftershock Sunday added to the chaos and fear. Many families are spending a second night in the open air or in makeshift tents because they have lost their homes or they fear returning home.

U.N. spokeswoman Orla Fagan, who is heading to Nepal, said preventing the spread of disease is one of the most important tasks facing aid workers who are arriving.

Substantial logistical hurdles remain, but there were hopeful signs as Kathmandu's international airport reopened after Saturday's crushing earthquake, and some aid vehicles were able to travel overland from Indian to the stricken Nepalese city of Pokhara.

"That means supplies could potentially come in overland from India. That is a positive sign," said Ben Pickering, Save the Children's humanitarian adviser in Britain. "The airport opening is a small miracle."

He cautioned that chaotic conditions may create a bottleneck at the airport as governments and aid agencies try to bring in personnel and supplies in the coming days.

The need is great: UNICEF said Sunday that at least 940,000 children in areas affected by the earthquake are in "urgent need" of humanitarian assistance. UNICEF staff reported dwindling water supplies, power shortages and communications breakdowns.

There is still a dearth of information about conditions at the epicenter of the earthquake, Pickering said, and is not clear which roads are passable.

"Going forward it's about access to the epicenter, and helicopters are the key, but it's not clear whether they can be sourced and whether the high altitude is a problem," he said, adding that Save the Children has emergency kits pre-positioned in three warehouses in Nepal and plans to distribute bedding, buckets and other basic supplies to 2,000 families as quickly as possible.

International Search and Rescue Germany said a team of 52 relief workers including doctors, experts trained in searching for people buried under rubble and several dog squads are flying Sunday. The team will bring a mobile medical treatment center.

Spokesman Stefan Heine said the priority was to get to the scene of the quake as quickly as possible to find those still alive.

They will be supported by numerous governments that have announced plans to send aid worth millions of dollars.

The Israeli military said it is sending a 260-member mission to Nepal to provide immediate search-and-rescue help and medical aid.

"An advanced multi-department medical facility, equipped with approximately 95 tons of humanitarian and medical supplies from Israel and a medical staff of 122 doctors, nurses and paramedics, will be rapidly established in the city of Katmandu to provide medical care for disaster casualties," the Israeli military said.

European nations deployed as well: France said it would send 11 rescuers on Sunday; Britain announced that an advance team of eight had been sent and that a 5 million pound ($7.6 million) aid package would be available under a rapid response plan; and the Swiss Foreign Ministry said a team of experts including a doctor, a building surveyor and water quality technician had left for Nepal on Sunday.

At the Vatican, Pope Francis led prayers in St. Peter's Square for the dead and displaced in Nepal and surrounding areas.

Francis called for assistance for the survivors during his weekly Sunday blessing. He said he was praying for the victims, the injured and "all those who are suffering from this calamity," and asked that they have the "support and fraternal solidarity" they need.

Volunteers from various British charities gathered at London's Heathrow Airport getting ready for overnight flights to the Nepal region.

Gary Francis, leader of the Search and Rescue Assistance in Disasters group, said the group is bringing in enough tents, food and water to operate self-sufficiently for 15 days.

They are bring in "a vast array" of equipment including sound and vibration detectors, seismic listening devices, and cutting equipment, with an eye toward finding survivors.

"Once we are there we've got the ability to carry out a coordination role or urban search and rescue looking for survivors trapped in collapsed buildings," he said.